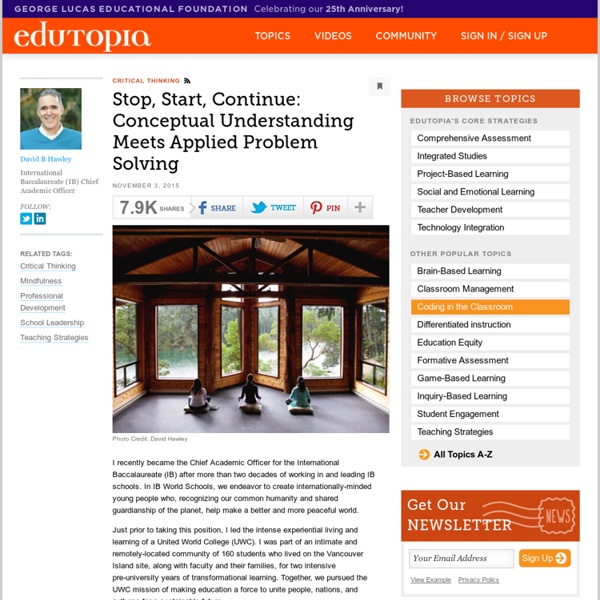 I recently became the Chief Academic Officer for the International Baccalaureate (IB) after more than two decades of working in and leading IB schools. In IB World Schools, we endeavor to create internationally-minded young people who, recognizing our common humanity and shared guardianship of the planet, help make a better and more peaceful world. Just prior to taking this position, I led the intense experiential living and learning of a United World College (UWC). I was part of an intimate and remotely-located community of 160 students who lived on the Vancouver Island site, along with faculty and their families, for two intensive pre-university years of transformational learning. Together, we pursued the UWC mission of making education a force to unite people, nations, and cultures for a sustainable future. Every year we built a community that modeled what all of us wished for in the wider world. What should we stop doing? How might we help to make that happen? Stop rushing.

Let creativity into the language class Creativity is not an optional extra for a language teacher, something off the wall to do on a Friday afternoon perhaps. Rather, creativity should be the teacher's best friend. For too long English language teachers have worried about finding the best method, the quickest, most efficient way to teach languages. But this quest for a pedagogic holy grail, however noble, is destined to fail, and for many reasons, not least because there are far too many variables flying around. Inquiry-Based Learning: From Teacher-Guided to Student-Driven Student: I opened it up, and there was a root inside. Anne: What's exciting about the inquiry models that we go far and above what the curriculum expectations are. Kids are invested in their learning, and they're able to transfer and apply what they're learning in school to the real world. Lindsay: Inquiry based learning allows the students to be the thinkers. Teachers begin their lesson with an idea of where they want to end in mind, but really give the students the opportunity to drive it to that point. Lindsay: So your job, keep working through your procedure, when you all agree, I'll come back and check in with you.

How to Keep the Human Element in Online Classes “Wow. I always thought my online instructors were computers.” An online student shared this comment with his instructor after receiving an email from her that included feedback on an assignment. How To Use Twitter For Exit-Slip Teaching - 8 Reflective Questions To Help Any Student Think About Their Learning by TeachThought Staff For in-person professional development from TeachThought on reflection in learning or any other topic your school or district might need, contact us today. What’s the big deal about thinking about something that already happened? In our ’10 Characteristics Of A Highly-Effective Learning Environment‘, we suggested that learning habits–reflection, for example–were constantly present and modeled. 9.

Does the language you speak change your view of the world? Bilinguals get all the perks. Better job prospects, a cognitive boost and even protection against dementia. Now new research shows that they can also view the world in different ways depending on the specific language they are operating in. Does your classroom make learning visible? – EDUWELLS I had a fantastic planning day with the leaders in my school yesterday where we evaluated how conscious and engaged our students were in their own learning. The consensus was that our overall system was still very teacher driven and much work had to be done to encourage teachers to involve the students in, and make them more aware of the process of learning they were experiencing. Why IS a Math test like a clay elephant?

Donald Trump isn’t empathetic. Is that a problem? Donald Trump has cleared every electoral hurdle before him in this presidential race. He went from 1 percent, literally, to the top of the polls. He beat 16 other people for the Republican nomination. He finds himself in a statistical dead heat with likely Democratic nominee Hillary Clinton. And, he has done it all by being himself: brash, bold, controversial and unapologetic. When Kids Have Structure for Thinking, Better Learning Emerges Amidst the discussions about content standards, curriculum and teaching strategies, it’s easy to lose sight of the big goals behind education, like giving students tools to deepen their quantitative and qualitative understanding of the world. Teaching for understanding has always been a challenge, which is why Harvard’s Project Zero has been trying to figure out how great teachers do it. Some teachers discuss metacognition with students, but they often simplify the concept by describing only one of its parts — thinking about thinking. Teachers are trying to get students to slow down and take note of how and why they are thinking and to see thinking as an action they are taking.

The most interesting line in Obama’s Howard speech was about empathy, not ‘blackness’ President Obama's speech at Howard University's commencement on May 7 was full of advice on civic engagement, black history and democracy. (The Washington Post) In the next few dizzying weeks, when one public figure and elected official after another will don academic robes and stoles to deliver commencement speeches at colleges and universities across the country, some ideas will inevitably be repeated. Dream big. Work hard. To thine own self be true. 24 Questions to Enhance Students Reflective and Critical Thinking Skills August 31, 2014 Reflection is a fundamental skill from which is branched out all other thinking skills. Reflection is a form of meta-thinking, a process of deep contemplation and pondering. It is also the basis of critical thinking for we can not raise critical thinkers if we do not have good 'reflectors'. When students are taught the art of reflecting, they become independent learners who are engaged in a constant process of assessment and re-assessment of their learning needs and strategies. Reflection is all about questioning. To cultivate a reflective culture within your class, students need to be encouraged to pose challenging questions as to the way they learn and think.

Introducing a series of poems on the Fourth Industrial Revolution The World Economic Forum has commissioned Brian Bilston, the “unofficial poet laureate of Twitter”, to write a series of four poems on the theme of the Fourth Industrial Revolution. Yes, you did read that right. The Forum is best known for bringing CEOs and world leaders together at Davos: we’re associated with statements, not stanzas. But in fact we have a history of involving cultural figures, from Elif Shafak to Yo-Yo Ma, because the global economy does not operate in a vacuum, and because artists offer nuanced and provocative perspectives on the most important questions of the day.

10 Tips For Launching An Inquiry-Based Classroom Transforming teaching practices is a long, slow road. But increasingly schools and teachers experiencing success are sharing their ideas online and in-person. Science Leadership Academy opened as a public magnet school almost ten years ago in Philadelphia. The educators that make up the school community have spent nearly half that time sharing best practices through a school-run conference each year and more recently by opening a second school in Philadelphia.