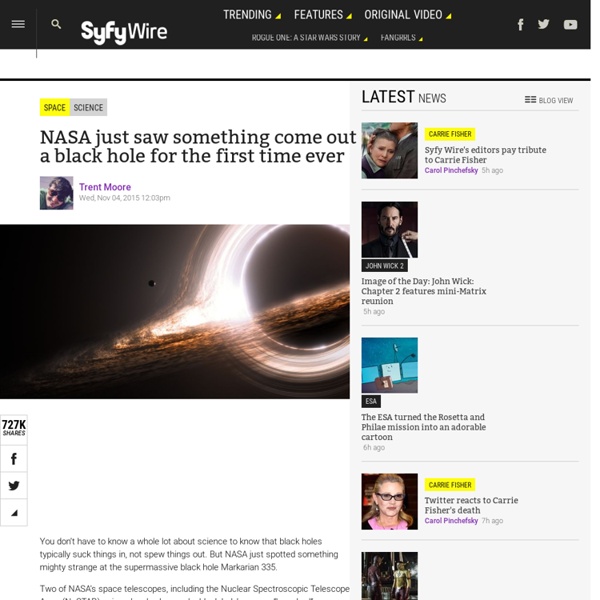 Wed, Nov 04, 2015 12:03pm You don’t have to know a whole lot about science to know that black holes typically suck things in, not spew things out. But NASA just spotted something mighty strange at the supermassive black hole Markarian 335. Two of NASA’s space telescopes, including the Nuclear Spectroscopic Telescope Array (NuSTAR), miraculously observed a black hole’s corona “launched” away from the supermassive black hole. Then a massive pulse of X-ray energy spewed out. “This is the first time we have been able to link the launching of the corona to a flare,” Dan Wilkins, of Saint Mary’s University, said. NuSTAR’s principal investigator, Fiona Harrison, noted that the nature of the energetic source is “mysterious,” but added that the ability to actually record the event should provide some clues about the black hole's size and structure, along with (hopefully) some fresh intel on how black holes function. (Via Viral Thread) Want more of Blastr's coverage of the mysteries of spaaaace? Related:  Earth & Space

Scientists have created a single chart that illustrates the circle of life with every known species on Earth In 1582, Richard Mulcaster, headmaster of the Merchant Tailors’ school, wrote that “our English tung is of small reatch, it stretcheth no further than this Iland of ours.” It didn’t stay that way. Today, English is spoken by more than a billion people all over the world. It is a colorful, vibrant, and diverse tongue that long has picked up words from the many languages with which its speakers have come into contact. “English” The English language originates in the dialects spoken by the early Germanic tribes—the Angles, Saxons, and Jutes—who began to settle Britain following the departure of the Romans in the fifth century AD. Its ultimate origin is the Latin Angli—“the people of Angul”—the name given to an area of northern Germany (now Schleswig-Holstein) where the tribe originated. When Pope Gregory the Great (590-604 AD) encountered a group of young Angles at a Roman slave market, he remarked that they looked more like angeli—“angels”—than Angli, prompting him to send St. “Beef” “Tea”

5 Best Credit Cards for Uber and Lyft This post contains references to products from one or more of our advertisers. We may receive compensation when you click on links to those products. For an explanation of our Advertising Policy, visit this page. On-demand ride services such as Uber and Lyft make transportation easier both at home and abroad. To help you maximize your spending with these two companies, TPG Senior Points & Miles Contributor Nick Ewen walks you through the top-five cards to use. Whether you’re a fan of it or not, there’s no denying that the sharing economy has created additional options for travelers. Today, I’ll share my list of the top credit cards to use with these services to ensure that you’re maximizing your point and mileage accrual on every purchase. 1. My top pick for Uber and Lyft rides may surprise you: the Citi ThankYou Premier Card. Current sign-up bonus: Earn 50,000 bonus points after $3,000 in purchases within the first three months of account opening. 2. 3. 4. 5. Bottom Line

How North America got its shape - Peter J. Haproff Want to learn more about North America’s geologic history and plate tectonics? Talk to a geologist! Visit our UCLA Tectonics and Structural Geology group site and check out ongoing research and published papers on the Himalayas, Tibetan Plateau, and even Mars. You can find excellent figures and explanations of North American plate tectonics from the U.S. Want to learn more about the San Andreas fault and other active faults right in our backyard? North America's range of national parks offers many opportunities for visitors to see these geographical and geological formations in person.

Natural Ways to Put an End to Moles, Warts, Blackheads, Skin Tags and Age Spots - Is your skin problematic? Skin tags, moles, warts, age spots and blackheads are only a sequence of more than 3000 skin problems that occur to people on a daily basis. When there is a change of the texture or the color of the skin, infection, allergic reactions and inflammation can appear on any place of the body. However, a lot of skin problems are temporary and treatable and these are some of the ways in which you can cure them. Natural cures for warts Warts are a result of the Human Papilloma Virus (HPV) which has somewhere over 100 types which affect people in different ways, but most often it depends on the immunity. These cures are indeed helpful, but neither of them can help you overnight. Apple Cider Vinegar This is one of the most helpful cures for warts. Garlic This is a great herb for warts removal. Bananas The method with applying the inside of the banana peel for successful removal of warts has been published in several medical journals. Duct tape Pure Raw Honey Ingredients:

businessinsider We got a present from the Juan de Fuca Plate, which is subducting under the North American Plate: a slow earthquake! Did you even know an earthquake could be slow? We're used to thinking of earthquakes as events that happen over seconds to a few minutes and produce a lot of shaking, but some earthquakes actually mosey along over hours or days, their trembling so gentle only seismometers can recognize it. One of these earthquakes started in the Cascadia Subduction Zone on December 21st and has been making its slow way south from Vancouver Island, British Columbia, Canada ever since. Shelley Chestler at the Pacific Seismic Network has an excellent article on it. It's a feast of helpful illustrations and a clear explanation of what's going on, and I encourage you to read it in full if you want to know more about what's going on around one of the most dangerous fault zones in North America. A map of the Juan de Fuca Plate, showing the subduction zone off the west coast of North America.

This Breathtaking Photo Shows Two Galaxies Merging Together AnimeFest - Annual Convention in Dallas Texas for Fans of Anime uk.businessinsider The universe is so vast it's almost impossible to picture what it might look like crammed into one field of view. But musician Pablo Carlos Budassi managed to do it by combining logarithmic maps of the universe from Princeton and images from NASA. He created the image below that shows the observable universe in one disc. Our sun and solar system are at the very center of the image, followed by the outer ring of our Milky Way galaxy, the Perseus arm of the Milky Way, a ring of other nearby galaxies like Andromeda, the rest of the cosmic web, cosmic microwave background radiation leftover from the big bang, and finally a ring of plasma also generated by the big bang: Pablo Carlos Budassi Logarithms help us make sense of huge numbers, and in this case, huge distances. Budassi got the idea after making hexaflexagons for his son's birthday one year. He released the image into public domain, and has created a few other log scales, too.

untitled This Is What Supercontinent Pangea Looks Like Mapped With Modern Borders Imagine traveling from China to Antarctica, crossing through Canada, Brazil and India – without setting foot in any water. Unfortunately, you’ve missed your chance long ago as the supercontinent of Pangea no longer exists. But thanks to the illustrative talents of Massimo Pietrobon, you can see how Pangea may have looked before the epic landmass started ripping itself apart 200 million years ago to form the continents and countries of the world today. Image Credit: Massimo Pietrobon Surrounded by a superocean called Panthalassa, the bulk of Pangea was in the southern hemisphere, unlike how the continents are spread out now. Evidence for Pangea has been found in similar fossils recently discovered in South Africa, India and Australia, such as the therapsid Lystrosaurus and similar rock forms seen between the eastern coast of South America and the western coast of Africa. [H/T io9]

How to Quickly & Naturally Get Rid of Clogged Ears Have you ever suddenly experienced trouble hearing? Your ear ached and there was a popping sensation inside? Plugged ears can be not only annoying, but also painful. But before reaching for pharmaceutical solutions, you can try several natural ways to unclog your ears. Clogged Ears – The Sinus-Ear Connection Ear troubles are often caused by colds and allergies affecting your respiratory system. The most common culprits behind plugged ears are viral and bacterial infections and allergies, but too narrow Eustachian tubes can play a role in it as well. Other reasons for having to deal with uncomfortable sensations inside your head include: Ear wax build-up (find instructions below on how to naturally remove ear wax)Changes in atmospheric pressure (for example, when travelling in a plane or when hiking or driving on high altitudes)Water accumulation inside the ear Natural Ways for Getting Rid of Clogged Ears Prevention first Nip the problem in the bud before it escalates. Valsalva Maneuver 1. 2.