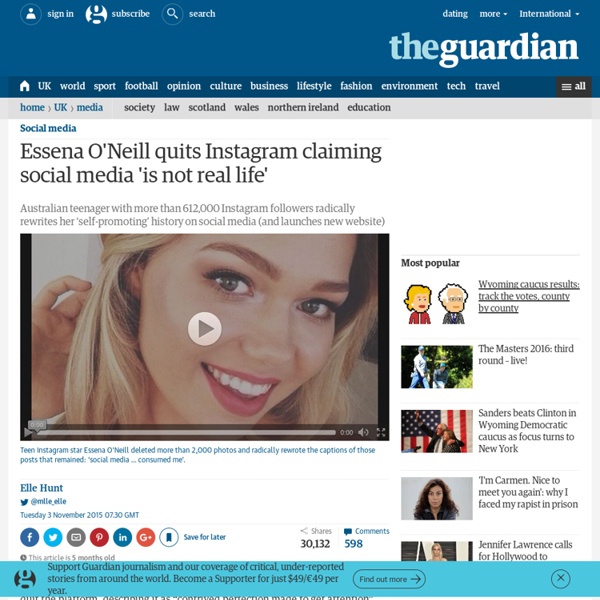 An Australian teenager with more than half a million followers on Instagram has quit the platform, describing it as “contrived perfection made to get attention”, and called for others to quit social media – perhaps with help from her new website. Essena O’Neill, 18, said she was able to make an income from marketing products to her 612,000 followers on Instagram – “$2000AUD a post EASY”. But her dramatic rejection of social media celebrity has won her praise. On 27 October she deleted more than 2,000 pictures “that served no real purpose other than self-promotion”, and dramatically edited the captions to the remaining 96 posts in a bid to to reveal the manipulation, mundanity, and even insecurity behind them. O’Neill did not respond to requests for an interview. A photo of her wearing a bikini, once captioned “Things are getting pretty wild at my house. “Why would you tell your followers that you’re paid a lot to promote what you promote? “Yet I, myself, was consumed by it.

Aussie model furious at lack of likes on Instagram photo It can be hard to deal with. You post a photo on Facebook or Instagram, sit back and wait for shit to kick off. That’s fire you think to yourself. Does the government really want to ban WhatsApp, iMessage and Skype? - BBC News Eight hundred million people around the world use WhatsApp to communicate, we learned this week from its owners, Facebook. Yet this is the messaging service which could soon be banned by the British government because its use of encryption makes it too private for the security services to access. That at least was the story repeated in several newspapers in recent weeks, and frequently denied by Downing Street. But this morning even the Financial Times seemed to back it up. In an article about the battle between governments and corporations over access to encrypted messages it says this: "David Cameron, UK prime minister, has proposed a complete ban on strong encryption 'to ensure that terrorists do not have a safe space in which to communicate'." WhatsApp is just one of the services that uses strong encryption for their messages, along with Apple's iMessage and Skype's internet calls.

Foundling Museum This major exhibition focuses on the myth and reality of the ‘fallen woman’ in Victorian Britain. In an age when sexual innocence was highly valued and sex for a respectable woman was deemed appropriate only within marriage, the loss of chastity for an unwed woman had multiple repercussions. The figure of the ‘fallen’ woman was popularly portrayed in art, literature and the media as Victorian moralists warned against the consequences of losing one’s virtue. This exhibition draws together the work of artists including Dante Gabriel Rossetti, Richard Redgrave, George Frederic Watts and Thomas Faed, who considered the subject of the fallen woman in their work and helped propel the myth. In addition, newspaper illustrations and stereoscopes demonstrate how depictions of the fallen woman in popular culture also helped define a woman’s role and limitations within society. The exhibition also explores the written petitions of women applying to the Foundling Hospital at the time.

Teen Instagram Star Essena O'Neill Has Crisis of Conscience Using social media for social good. Teen Instagram star Essena O’Neill shared her last post on YouTube on Monday, Nov. 2, explaining to her fans and followers exactly why she’s decided to pull the plug on all her social media accounts. The 18-year-old Aussie native, who has more than half a million followers on Instagram and more than 200,000 subscribers on YouTube, kicked off the video with a disclaimer. The ugly truth behind my perfect Instagram shots: A model confesses '[Instagram] has mutated into a behemoth of self-promotion where the more likes a person has, the more prestige and earning-power they can command' One photo, she explained, had had to be taken over a hundred times to get absolutely right and in another she revealed she was paid hundreds of pounds to wear a certain dress. She told how she would starve herself for days to get the perfect flat stomach, and a new caption under a smiling selfie ends with a disclaimer all in upper case: ‘There is nothing real about this’. Often, she said, she felt utterly alone. While some users applauded her honesty, days later other commentators were calling the whole thing a hoax, a clever marketing ploy whereby Essena was simply making herself (and a her new website) even more famous. Model and blogger, Rebecca Pearson, at home in South London.

Why this artist is setting fire to the naked female form On the heels of her evocative photo series on tumblr, “And Everything Nice”, going viral – a piece that exposes society’s unrealistic expectations on females even in states of affliction, Hannah Altman strikes once again with “How To”. A multi-media installation that further explores the theme of female body shaming, the artist in collaboration with fellow artists Katie Krulock and Sadie Shoaf, juxtaposes mutilation with piercing irony – using references from the past as well as the present, Altman seems to be waving her finger in disapproval at our collective ignorance of the female condition. Just 20-years-old, Altman represents a slew of emerging female artists unafraid to assume a feminist viewpoint in her work, challenging the boundaries of societal ideologies with their bold, unapologetic statements. We sat down with Altman to discuss her latest project, how we can combat unattainable standards of beauty, and how she hopes young girls will react to her work.

More than a quarter of children who spend longer on social networking websites report mental ill-health symptoms Children who spent more than three hours using social networking websites on a school day were twice as likely to report high or very high scores for mental ill-health. The Children’s Well-being 2015 publication, which for the first time includes an analysis of data on children’s mental ill-health, revealed that of those who were online for more than three hours, 27% reported high or very high scores for mental ill-health. This is more than double those spending no time on them (12%) or those spending up to three hours on social media (11%). Total difficulty score type by time spent using social media on a school day, UK, 2011 to 2012 Download the data The Insights into Children’s Mental Health and Wellbeing report is part of of ONS’s work on the well-being of children.

This artist has found a new way to #freethenipple Instagram's strict no-nudity policy has been a hot topic in recent months. It's sparked debate, a slew of body-positive art, and even ignited its own #freethenipple movement. After all, if it's fine to watch a man get shot in the head by these standards, what's the big deal about showing a slip of a woman's nipple? “A great deal of my art projects are about the female body, so I had struggles promoting my projects online due to the naked censorship policy on Instagram and Facebook,” says artist Esmay Wagemans. Shaaanxo: About Me My name is Shannon Harris. I am 21 years old, living in the little country of New Zealand! I am a YouTube Vlogger, Blogger and Social Media Personality. To sum me up? I live for positivity, beauty and fashion, my pets, my family and friends, and for simple happiness. I don't mind where I am in 10 years from now, as long as I am happy and content.