The flow towards Europe - Lucify 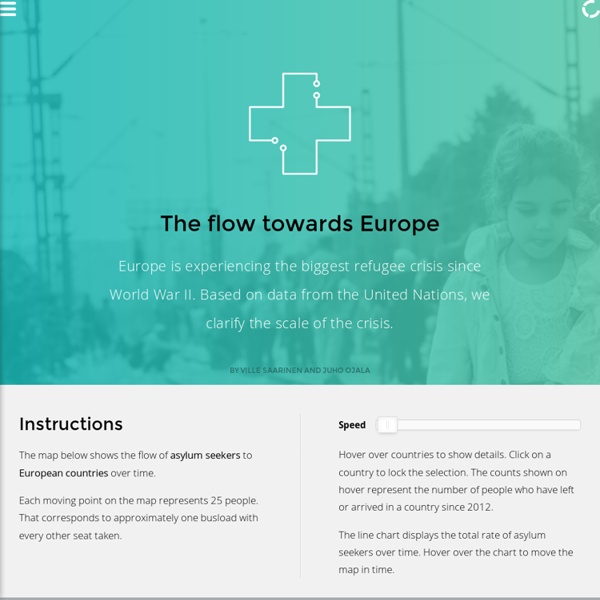 This is how immigration will change Europe over the rest of this century Migrants near the city of Gevgelija in the Former Yugoslav Republic of Macedonia line up to board a train bound for the Serbian border on Nov. 12, 2015. (Georgi Licovski/European Pressphoto Agency) The debate over immigration has thrown politics on both sides of the Atlantic into confusion. 49 outstanding examples of CSS It's amazing what can be done with CSS these days. Support for the latest CSS3 properties is strong in the latest versions of all the major browsers – even Internet Explorer – and the possibilities for typography, animation and interactivity have never been greater. But finding web design inspiration can be tricky. At its core the secret to a great website is not about showing off with slick visuals and whizz-bang features, but lies in creating a great experience for users through a layout and navigation that guide them to where they want to go quickly and effortlessly. That said, if it can look beautiful as well, that's the icing on the cake.

Europe's Migrant Crisis Introduction Migrants and refugees streaming into Europe from Africa, the Middle East, and South Asia have presented European leaders and policymakers with their greatest challenge since the debt crisis. The International Organization for Migration calls Europe the most dangerous destination for irregular migration in the world, and the Mediterranean the world's most dangerous border crossing. Yet despite the escalating human toll, the European Union's collective response to its current migrant influx has been ad hoc and, critics charge, more focused on securing the bloc's borders than on protecting the rights of migrants and refugees. However, with nationalist parties ascendant in many member states, and concerns about Islamic terrorism looming large across the continent, it remains unclear if the bloc or its member states are capable of implementing lasting asylum and immigration reforms.

20TH & 21ST Century Migrations / Our Migration Story 1900–1960s The first half of the 20th century was one of low immigration except for crises created by the two world wars. World War I. During the War anti-German feeling in Britain erupted into violent incidents and large numbers of Germans and Austrians were interned as ‘enemy aliens’ (see ‘Germanophobia’). Meanwhile, a quarter of a million Belgian refugees were welcomed to Britain temporarily, most returning home after the war.

Europe's migration crisis Refugee and migrant arrivals to Europe by sea About a million refugees have reached Europe by sea as of end December, more than four times the total arrivals in 2014, data from the United Nations High Commissioner for Refugees shows. Destination countries With 244 million immigrants in the world, which country has the most? With nearly 30% of the population born outside of its borders, Switzerland is one of the European countries with the highest proportion of foreigners. Globally, the Gulf countries host the most migrants. Still, contrary to popular belief, these rates have remained relatively stable over the past 25 years. In absolute terms, the United States remains the champion of immigration – with about 20% of the world’s migrants. Then come Germany, Russia and Saudi Arabia – who together host 14%.

Play GTA V In Your Browser – Sort Of Inspired by a blog post to run your own cloud gaming service which uses a VPN and Steam's In-Home Streaming, I thought I could do this, too, but in the browser. With the tech I developed for Instant Webcam I had all the major building blocks ready and just needed to glue them together in nice, useable Windows App. The result is jsmpeg-vnc – a tiny Windows application written in C. It captures the screen at 60 frames per second, encodes it into MPEG1 using FFmpeg, sends it over WebSockets to the browser where it is finally decoded again in JavaScript using jsmpeg. All the mouse and keyboard input in the browser is captured as well and sent back to the server again.

Do you have #refugenes? 12 celebrities you never knew were refugees What do the singers Jamie Cullum and Rita Ora, the authors Ben Elton and Neil Gaiman, the comedian Shappi Khorsandi and the architect Richard Rogers have in common? All of them have “refugenes”, according to a new campaign launched by the charity Help Refugees, which is seeking to raise awareness of the number of people in Britain who have a family history involving flight from conflict. Some, like The Voice star Ora, are themselves refugees. Her family fled the persecution of ethnic Albanians in Kosovo, settling in the UK in 1991 when she was one year old. Others, like broadcaster and co-founder of Help Refugees Lliana Bird, have ancestors who were forced to leave their home countries.

Concorde question Hi Stilton, that is a question that we all used to ask ourselves; not having an APU was a major pain in the butt for the fleet, particularly at charter destinations, where air start trucks, GPU's and air conditioning trucks would all have to be pre-arranged. One problem with 'Conc' was always one of weight, (for every extra pound you carried, another pound of fuel was required) so any APU installation would have to have been light, and worth the extra weight. But the main problem was one of 'where to put the darned thing.