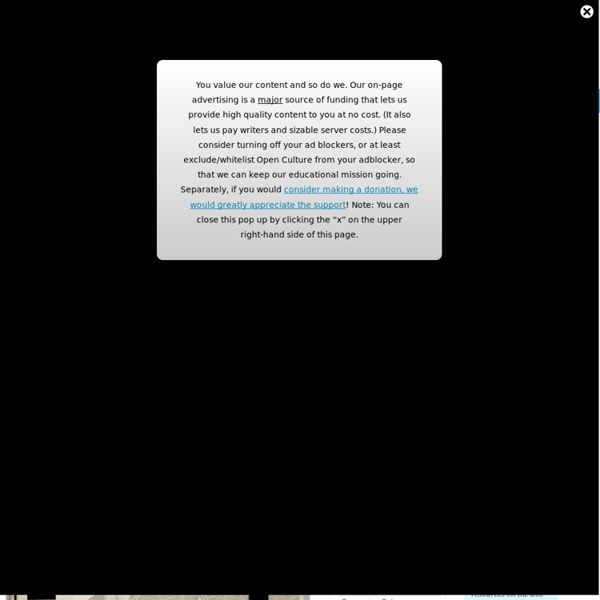 In 1919, German architect Walter Gropius founded Bauhaus, the most influential art school of the 20th century. Bauhaus defined modernist design and radically changed our relationship with everyday objects. Gropius wrote in his manifesto Programm des Staatlichen Bauhauses Weimar that “There is no essential difference between the artist and the artisan.” His new school, which featured faculty that included the likes of Paul Klee, László Moholy-Nagy, Josef Albers and Wassily Kandinsky, did indeed erase the centuries-old line between applied arts and fine arts. Bauhaus architecture sandblasted away the ornate flourishes common with early 20th century buildings, favoring instead the clean, sleek lines of industrial factories. Designer Marcel Breuer reimagined the common chair by stripping it down to its most elemental form. Nowadays, of course, getting one of those Bauhaus tea kettles, or even an original copy of Gropius’s manifesto, would cost a small fortune. 1. Related Content:

The Guggenheim Puts 109 Free Modern Art Books Online Back in January, 2012, we mentioned that the Guggenheim (the Frank Lloyd Wright-designed modern art museum in NYC) had put 65 art catalogues on the web, all free of charge. We’re happy to report that, between then and now, the number of free texts has grown to 109. Published between 1937 and 1999, the art books/catalogues offer an intellectual and visual introduction to the work of Alexander Calder, Edvard Munch, Francis Bacon, Gustav Klimt & Egon Schiele, Fernand Léger, and Kandinsky. Plus there are other texts (e.g., Masterpieces of Modern Art and Abstract Expressionists Imagists) that tackle meta movements and themes. Anyone interested in the history of the Guggenheim will want to spend time with a collection called “The Syllabus.” It contains five books by Hilla Rebay, the museum’s first director and curator.

Download 448 Free Art Books from The Metropolitan Museum of Art You could pay $118 on Amazon for the Metropolitan Museum of Art’s catalog The Art of Illumination: The Limbourg Brothers and the Belles Heures of Jean de France, Duc de Berry. Or you could pay $0 to download it at MetPublications, the site offering “five decades of Met Museum publications on art history available to read, download, and/or search for free.” If that strikes you as an obvious choice, prepare to spend some serious time browsing MetPublications’ collection of free art books and catalogs. You may remember that we featured the site a few years ago, back when it offered 397 whole books free for the reading, including American Impressionism and Realism: The Painting of Modern Life, 1885–1915; Leonardo da Vinci: Anatomical Drawings from the Royal Library; and Wisdom Embodied: Chinese Buddhist and Daoist Sculpture in The Metropolitan Museum of Art. Related Content: Download Over 250 Free Art Books From the Getty Museum

New York Public Library Puts 20,000 Hi-Res Maps Online & Makes Them Free to Download and Use When I was a kid, my father brought home from I know not where an enormous collection of National Geographic magazines spanning the years 1917 to 1985. I found, tucked in almost every issue, one of the magazine’s gorgeous maps—of the Moon, St. Petersburg, the Himalayas, Eastern Europe’s ever-shifting boundaries.

Digital Collections and Services: Access to print, pictorial and audio-visual collections and other digital services Historic Newspapers Enhanced access to America's historic newspapers through the Chronicling America project. Historic Sound Recordings The National Jukebox features over 10,000 78rpm disc sides issued by the Victor Talking Machine Co. between 1900 and 1925. Performing Arts Collections, articles and special presentations on music, theater and dance materials from the Performing Arts Encyclopedia. Prints and Photographs Catalog of about half of the Library's pictorial holdings with over 1 million digital images. Veterans History Project Experience first-person stories of wartime service through personal artifacts, audio and video interviews.

A 5-Step Technique for Producing Ideas circa 1939 Literature is the original “inter-net,” woven of a web of allusions, references, and citations that link different works together into an endless rabbit hole of discovery. Case in point: Last week’s wonderful field guide to creativity, Dancing About Architecture, mentioned in passing an intriguing old book originally published by James Webb Young in 1939 — A Technique for Producing Ideas (public library), which I promptly hunted down and which will be the best $5 you spend this year, or the most justified trip to your public library. Right from the introduction, original Mad Man and DDB founder Bill Bernbach captures the essence of Young’s ideas, with which Steve Jobs would have no doubt agreed when he proclaimed that “creativity is just connecting things”: Mr. Young is in the tradition of some of our greatest thinkers when he describes the workings of the creative process.

Public Domain Collections: Free to Share & Reuse That means everyone has the freedom to enjoy and reuse these materials in almost limitless ways. The Library now makes it possible to download such items in the highest resolution available directly from the Digital Collections website. Search Digital Collections No permission required. No restrictions on use. The Bauhaus according to Italo Rota As an architect, Italo Rota says he did not feel in any way that the Bauhaus legacy had had a profound effect on their work. On the other hand, he held several positions as a university professor, in France and Italy, and is director of the Department of Design in the Nuova Accademia di Belle Arti (NABA) in Milan. During these experiences, he tells us, “I always carried on the fundamental idea that was in the Bauhaus, that of shortening the distance between teacher and student, having them sit together around a table in front of a topic to be developed”. It is not based on egalitarian inspiration, but rather a real inherent need to face the problems that we meet in today's world, that take us by surprise and prevent us from developing careers as specialists or targeted teaching techniques: “Experience is becoming shorter, and we find ourselves all together facing a new issue.” ” What went wrong?

Download 144 Beautiful Books of Russian Futurism: Mayakovsky, Malevich, Khlebnikov & More (1910-30) In the years after World War II, the CIA made use of jazz musicians, abstract expressionist painters, and experimental writers to promote avant-garde American culture as a Cold War weapon. At the time, downward cultural comparisons with Soviet art were highly credible. Many years of repressive Stalinism and what Isaiah Berlin called “the new orthodoxy” had reduced so much Russian art and literature to didactic, homogenized social realism. But in the years following the first World War and the Russian Revolution, it would not have been possible to accuse the Soviets of cultural backwardness. The first three decades of the twentieth century produced some of the most innovative art, film, dance, drama, and poetry in Russian history, much of it under the banner of Futurism, the movement begun in Italy in 1909 by F.T. Marinetti.