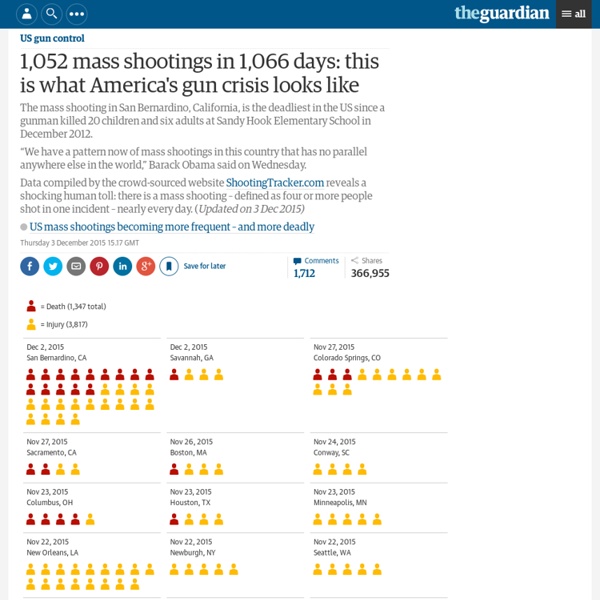 One map that puts America's gun violence epidemic in perspective The United States owns way, way more guns per capita than the rest of the world. And the best research on gun violence suggests that's probably contributing to our homicide problem — as exemplified by Wednesday afternoon's horrific shooting at the Inland Regional Center, a social services office for people with developmental disabilities, in San Bernardino, California. Here's a map of firearm ownership around the world, using 2012 data compiled by the Guardian. Forget about changing the Second Amendment. And stop focusing on mass killings. (Karen Bleier/AFP/Getty Images) The recent spate of high profile shootings — in Charleston, Oregon, and elsewhere — has again propelled forward the question of how to combat gun violence, suggesting it might even become a meaningful issue in 2016. So there are two things liberals and Democrats might want to start clarifying right now about how they’re going to approach this debate: 1) It’s probably a good idea for liberals to fully acknowledge the individual gun right, and focus on making the case that sensible regulation of firearms is not incompatible with that right.

States With Most Gun Laws Have Fewest Gun Deaths, Study Finds States with more gun laws have lower levels of gun fatalities, according to a new study from Boston Children’s Hospital. While the study, published in the journal JAMA Internal Medicine, does not establish cause-and-effect, nor which particular gun laws are most effective, it does suggest a positive relationship between gun control and gun violence prevention. According to NBC News: “It seems pretty clear: If you want to know which of the states have the lowest gun-mortality rates just look for those with the greatest number of gun laws,” said Dr. Eric W. The authors of the study openly acknowledge that correlation research has a much more limited application than research that establishes cause-and-effect, and conclude that further study is necessary.

Gun control advocates hail 'significant' victory in Wisconsin gun shop case Advocates for stronger gun safety laws have hailed a rare victory in a lawsuit brought by victims of a shooting against the gun dealer that sold the pistol used to injure them. A landmark case concluded in Wisconsin late on Tuesday with a jury awarding more than $5m in damages to two police officers who were shot by an 18-year-old who had paid an older friend to buy a gun for him illegally at the dealership. It is believed to be the first such lawsuit successfully fought against the gun industry in the US in the 10 years since federal legislation was passed to protect gun makers and sellers from legal action at the state and federal level. It was only the second such lawsuit to get to the jury stage at trial in that time, with the other case having been found in favor of the gun shop in a court case in Alaska in the summer. “The goal was both to achieve justice for themselves but also for others in this community. “Funds to the ATF have been dramatically cut.

Infographic: A look at gun deaths and permits - Occasional Planet A person in New York is less likely to die by a gun (murder, suicide, or accident) than in Missouri. Are the behaviors of a person so divergent according to where they live, or could the differences in gun laws play a part? (I’m a Missourian myself, so I can attest that the state isn’t filled with violent gun-toting miscreants.) This infographic shows a look at all firearm deaths by state and provides a bit of insight as to how easy (or hard) it is to procure a gun there. Researchers agree: Strong gun laws save lives Feel safer yet? David Hemenway, director of Harvard's Injury Control Research Center, attempted to find out whether there was in fact a scientific consensus for or against the National Rifle Association's frequent assertions that more guns in more places reduces crime. The results are, to anyone who has been paying the slightest attention to past studies on these things, unsurprising. Hemenway's team at Harvard went through about 1,200 articles on firearms published since 2011 in peer-reviewed journals focused on public health, public policy, sociology, and criminology. In May 2014, Hemenway began sending monthly surveys to the authors of these articles—upwards of 300 people—with questions concerning firearm use, background checks, and other gun policies.

Gun safety group outlines regulations Obama could adopt – without Congress A major gun safety group on Monday released a list of measures it said the Obama administration could adopt – without congressional approval – to reduce gun violence in the US. Everytown for Gun Safety said its report was created in response to Obama’s call last week for citizens and the media to pressure lawmakers into enacting stricter gun control laws, which the president made in a speech following a shooting at Umpqua community college in Oregon that left 10 people dead, including the gunman. “This is a political choice that we make, to allow this to happen every few months in America,” Obama said. “We collectively are answerable to those families who lose their loved ones because of our inaction.”