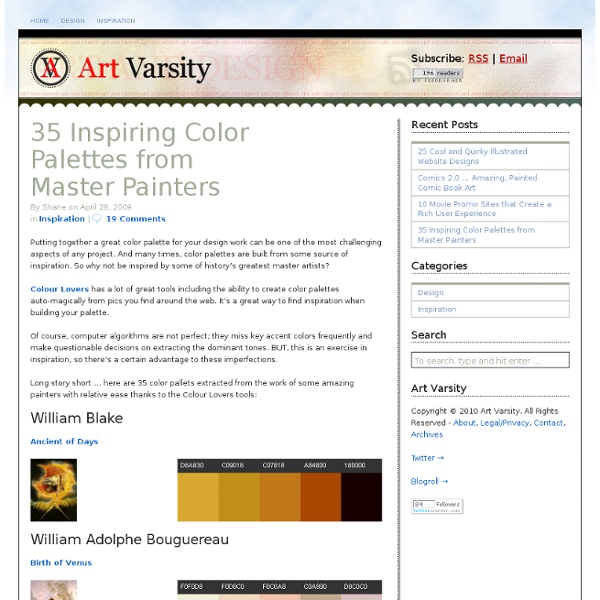 Putting together a great color palette for your design work can be one of the most challenging aspects of any project. And many times, color palettes are built from some source of inspiration. So why not be inspired by some of history’s greatest master artists? Colour Lovers has a lot of great tools including the ability to create color palettes auto-magically from pics you find around the web. It’s a great way to find inspiration when building your palette. Of course, computer algorithms are not perfect; they miss key accent colors frequently and make questionable decisions on extracting the dominant tones. Long story short … here are 35 color pallets extracted from the work of some amazing painters with relative ease thanks to the Colour Lovers tools: William Blake Ancient of Days William Adolphe Bouguereau Birth of Venus Nymphs and Satyr Young Girl Defending Herself Against Eros Alexandre Cabanel Cleopatra Paul Cezanne The Basket of Apples La Montagne Saint Victoire Barnes Leonardo Da Vinci St.

The Two Essential Strategies of Effective Post-Processing Knowing how to use post-processing software is important for any creative photographer, but it is equally important to know what to do with that knowledge. No matter how proficient we are with our development tools, we still need to decide which direction to take an image for its final presentation. What follows is a guide for getting the most out of your image development by having clear strategies to guide the process. Quantum memory 'world record' smashed A fragile quantum memory state has been held stable at room temperature for a "world record" 39 minutes - overcoming a key barrier to ultrafast computers. "Qubits" of information encoded in a silicon system persisted for almost 100 times longer than ever before. Quantum systems are notoriously fickle to measure and manipulate, but if harnessed could transform computing. The new benchmark was set by an international team led by Mike Thewalt of Simon Fraser University, Canada. "This opens the possibility of truly long-term storage of quantum information at room temperature," said Prof Thewalt, whose achievement is detailed in the journal Science.

45+ Amazing Fashion Brochure Design Examples Startup Framework Close 45+ Amazing Fashion Brochure Design Examples Corina Ciripitca • Inspiration • April 5, 2011 • 0 Comments One way to know more about fashion and the new trends coming this year is by reading fashion brochures. When to Use a Lens Hood for the Best Results One of the most common photography accessories is a lens hood – a piece of plastic or metal that attaches to the front of your camera lens and makes it look more professional. But lens hoods are about more than looks. Just to name one benefit, they can make a major difference in a picture’s image quality. This article covers everything you need to know about using lens hoods to capture the best possible photos.

Create a rainbow coloured eyeball using Gimp In Gimp there are a wide variety of tools at the user’s disposal for colouring an area. Here we are going to learn how to use the gradient tool to selectively colour an area, in this case the iris of an eye, and to make the colour appear more a part of the image than if we dropped the colour straight into the image and left it. Step 1 Our first action will be to duplicate the background layer so that we can create a selection of just the Iris and modify that part of the image without affecting the rest of the picture. To isolate the Iris draw a path around it using the Path tool.

Surrealistic Paintings by Tetsuya Ishida (21 pics) Pics | 8 Jun, 2010 | Views: 22058 | These are the paintings of Japanese artist Tetsuya Ishida. He was trying to show the dark side of modern life. Weird. Do you like it? Avoiding Tangents: 9 Visual Blunders Every Artist Should Watch Out For Have you ever been caught off-guard by a visual tangent in your art? The word tangent usually just indicates that two things are touching, but in art the term describes shapes that touch in a way that is visually bothersome. When creating a composition, there are so many different things to juggle that it’s easy to miss even the obvious flaws—and that’s when tangents sneak in. Most tangents can easily be avoided, however, as long as you know what to look for during the early stages of the piece. To simplify that process, here’s a chart illustrating nine of the most common tangents.

35 Fresh Creative 3D Typography Designs For Inspiration Typography is truly important for the design of a website. It has to be aesthetic and look really good on the background one chooses for the design. You can either use simple and cute minimalist fonts, or something that will get the visitors’ attention, but not too distractive at the same time. While taking care of the design of your website you should also pay attention to the latest trends.

How to Easily Simulate a Tilt-Shift Effect Using Photoshop You might not know it, but even if you’ve never heard of tilt-shift photography you have probably seen a photograph that was captured in just such a way. A few years ago tilt-shift photos exploded into the mainstream with oddly miniaturized images of cities, cars, and even landscapes going completely viral seemingly overnight. Tilt-shift photography, in itself, is nothing more than a literal optical illusion. Essentially, it is nothing more than adding a strip of sharp focus to an otherwise blurred image. Computer History John Kopplin © 2002 Just a few years after Pascal, the German Gottfried Wilhelm Leibniz (co-inventor with Newton of calculus) managed to build a four-function (addition, subtraction, multiplication, and division) calculator that he called the stepped reckoner because, instead of gears, it employed fluted drums having ten flutes arranged around their circumference in a stair-step fashion. Although the stepped reckoner employed the decimal number system (each drum had 10 flutes), Leibniz was the first to advocate use of the binary number system which is fundamental to the operation of modern computers. Leibniz is considered one of the greatest of the philosophers but he died poor and alone. Leibniz's Stepped Reckoner (have you ever heard "calculating" referred to as "reckoning"?) Jacquard's Loom showing the threads and the punched cards