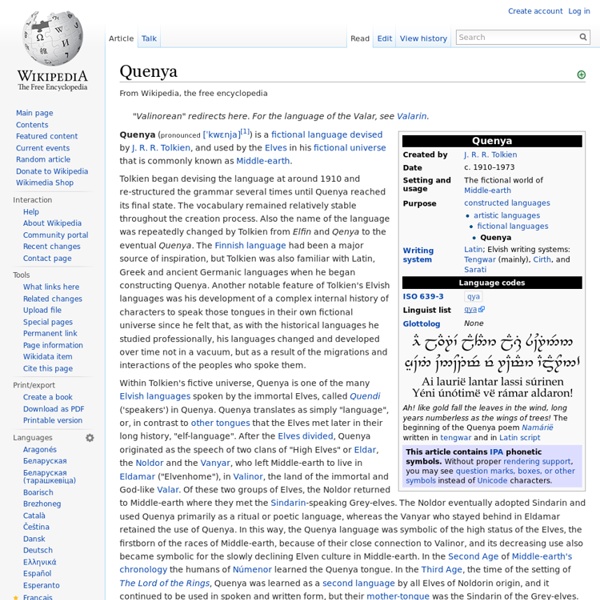 "Valinorean" redirects here. For the language of the Valar, see Valarin. Tolkien began devising the language at around 1910 and re-structured the grammar several times until Quenya reached its final state. The language featured prominently in Tolkien's The Lord of the Rings trilogy, as well as in his posthumously published history of Middle-earth The Silmarillion. External history[edit] J. The ingredients in Quenya are various, but worked out into a self-consistent character not precisely like any language that I know. Tolkien never intended Quenya, or any of his constructed languages, to be used in everyday life as an international auxiliary language,[5] although he was in favour of the idea of Esperanto as an auxiliary language within Europe.[6] With his Quenya, Tolkien pursued a double aesthetic goal: "classical and inflected".[4] This urge, in fact, was the motivation for his creation of a 'mythology'. Development[edit] In his lifetime, J. Publication of linguistic papers[edit] Related:  jrrt

Tom Bombadil From Wikipedia, the free encyclopedia Tom Bombadil is a supporting character in J. R. Appearances Literature The Adventures of Tom Bombadil Tolkien invented Tom Bombadil in honour of his children's Dutch doll, and wrote light-hearted children's poems about him, imagining him as a nature-spirit evocative of the English countryside, which in Tolkien's time had begun to disappear. Tolkien's 1934 poem "The Adventures of Tom Bombadil" depicts Bombadil as a "merry fellow" living in a dingle close to the Withywindle river, where he wanders, exploring nature at his leisure. The poems were published in the collections The Adventures of Tom Bombadil and later in Tales from the Perilous Realm. The Lord of the Rings Tom first appears within the story after Merry and Pippin are trapped by Old Man Willow and Frodo cries for help. Frodo spends two nights in Tom Bombadil's house, each night dreaming a different dream, which are implied to be either clairvoyant or prophetic. Characteristics Names and titles

Lord of the Rings Fanatics Archive Archive Home > Movies - The Fellowship of the Ring Huorn of Fangorn Points: 956 Posts: 1119 Joined: 01/Jan/2004 ...o.k that thread title is a little misleading, but seeing as you are here now. Tom Bombadil does feature in the film, well, some of his lines do anyway...on the extended D.V.D of the Two Towers, Treebeard says a line to the willow whos fissures Merry and Pippin fall into, the line Treebeard speaks is one of Tom’s something along the lines of "you should not be waking, dig deep, eat earth, *something which i can’t remember* go to sleep!" has anybody else noticed similar occurrences throughout any of the films?!? sorry, just remembered another one, Wormtongue’s infamous words to Eowyn, are actually Gandalfs in the book, but it worked better with Wormtongue saying them in the fiml i thought. Pilgrim of Isengard Points: 1663 Posts: 3518 Joined: 20/Jun/2002 Yes, that did remind me of good old Tom Bombadil, but I never really proved it as one of his quotes. Túrin24/Feb/2004 at 07:05 PM

Atar Atar[pronunciation?] (Avestan ātar) is the Zoroastrian concept of holy fire, sometimes described in abstract terms as "burning and unburning fire" or "visible and invisible fire" (Mirza, 1987:389). In the Avestan language, ātar is an attribute of sources of heat and light, of which the nominative singular form is ātarš, source of Persian āteš (fire). It was once thought to be etymologically related to the Avestan āθrauuan / aθaurun (Vedic atharvan), a type of priest, but that is now considered unlikely (Boyce, 2002:16). The ultimate etymology of ātar, previously unknown (Boyce, 2002:1), is now believed to be from the Indo-European *hxehxtr- 'fire'. [1] This would make it related to the Latin ater (black) and either a loan source or cognate of the Serbian ватра / vatra (fire) (also of the Romanian vatră (hearth, home, fireplace), of possible Dacian or Paleo-Balkanic origin), which sets Serbian apart from other Slavonic languages, e.g. In scripture[edit] In the Gathic texts[edit]

Aulë Fictional details[edit] As Aulë is a smith, he is the Vala most similar in thought and powers to Melkor, in that they each gloried in the fashioning of artful and original things. Both also came to create beings of their own. But while Aulë strove to be true to the original intent of the Music of the Ainur, and submitted all that he did to the will of Ilúvatar, Melkor wished to control and subvert all things, and was jealous of the creations of others so that he would try to twist or destroy all that they made. Aulë and the Creation of the Dwarves[edit] When Aulë had completed his work he began to instruct the Dwarves in the language he had made for them, Khuzdul. Ilúvatar accepted them as his adopted children; however, as it was ordained that the Elves were to be the firstborn race, he set the Dwarves to sleep "in the darkness under stone" inside remote mountains in Middle-earth, until after the Awakening of the Elves. Maiar Associated with Aulë[edit] References[edit] External links[edit]

Fëa and hröa In J. R. R. Tolkien's legendarium, fëa and hröa are words for "soul" (or "spirit") and "body". The plural form of fëa is fëar (pronounced [ˈfɛ.ar]) and the plural form of hröa is hröar (pronounced [ˈrɔ.ar]). (The words are also spelt fea and hroa because the spellings ëa, öa, where they occur, are only meant to remind people used to English orthography that the two vowels should not be drawn together in speech as in English "sea" or "load") The Elves' fate is to live as long as Arda exists; they are bound to the world and cannot leave it. Glorfindel died in battle during the First Age, and is the only Elf known to have returned to Middle-earth (probably around 1600 Second Age). A fëa may decide to stay in the Halls of Mandos, or it may be denied re-embodiment. The situation of Men is different: a Mannish fëa is only a visitor to Arda, and when the hröa dies, the fëa, after a brief stay in Mandos, leaves Arda completely. See also[edit] References[edit]

Middle-earth cosmology This is an overview of . Each entry is followed by any alternative names, any roughly corresponding primary world name in parentheses, and a brief description. A question mark after the primary world name indicates that the identification may be partially speculative or disputed. ( Heaven ) — The home of Eru ( God ) outside of Time. They are similar to Heaven in that they exist outside the boundaries of the universe and in that they do not have a physical form. Some hypothesize they are the final destination of the souls of Men ; however, it is a greater possibility they may be only a temporary, intermediate dwelling before the restoration of Arda. , Avakúma, Kúma, the Outer Dark, the Eldest Dark, the Everlasting Dark — An abstract uninhabited region of nothingness described as existing outside the Timeless Halls, Arda, and all of Eä. (the Universe ) — is the Quenya name for the universe , as a realization of the vision of the Ainur . , Ilu — See Arda . [ edit ] References Tolkien, J.

Quenta Silmarillion Quenta Silmarillion is a collection of fictional legends written by the high fantasy writer J. R. R. Summary[edit] Tolkien envisaged the Silmarillion as deriving from a manuscript written by an Eriol or Ælfwine of England, an imaginary dark age source for the material, which itself contains little or no reference to the people or events of the Second or Third Ages of his legendarium. Introduction of the Elves[edit] On one of his expeditions Oromë discovered the newly awakened Elves at Cuiviénen. The Elves who accepted the summons were carried across the sea on a floating island. The Noldor and Melkor[edit] Finwë, the first High King of the Noldor, had a son Fëanor. About this time, Melkor, having completed his sentence, convinced the other Valar that he had reformed and he was released. The Valar were soon aware of Melkor's ultimate responsibility in this. Fëanor was furious at the death of his father and the theft of the Silmarils. Departure of the Noldor and assault on Doriath[edit]

Ælfwine of England Ælfwine is a fictional character found in various early versions of J. R. R. Tolkien's legendarium. Tolkien envisaged Ælfwine as an Anglo-Saxon who visited and befriended the elves and acted as the source of later mythology. The later Quenya or "Elven-Latin" name Elendil translates the name Ælfwine. Conceptual origins[edit] In the continuity of The Book of Lost Tales, the character's real name was Ottor Wǽfre (called by the Elves Eriol). The character "Ælfwine" of the later continuity was not invented until sometime after the writing of "The Book of Lost Tales". Ælfwine in the later continuity[edit] There is no such framework in the published version of The Silmarillion; Tolkien eventually changed the intended framework of the saga, altering its mode from tales told by Ælfwine to one based around Bilbo Baggins's Red Book translations of "Elvish lore". Notes[edit] Sources[edit] Tolkien, J.R.R. (2002).

Tom Bombadil {{{image}}} {{{caption}}} Tom Bombadil Other names Iarwain Ben-adar, Orald, Forn Date of birth Unknown, before the coming of Melkor Year ascended to the throne Date of death Unknown, possibly immortal Actor Harry Wellerchew (TCG) Tom Bombadil in The Lord of the Rings is called by the Elves Iarwain Ben-adar "Oldest and Fatherless" in Sindarin, and dwelt in the valley of the river Withywindle, east of the Shire. "Tom Bombadil is a merry fellow! —Tom Bombadil He seems to have settled at the edge of the Old Forest, close to the Barrow Downs. There are many theories of his origins, such as him being a maia, man, Iluvatar himself or even the reader, though more on this can be found elsewhere (please see below). His costume consisted of a blue jacket and yellow boots, and he wore an old and battered hat, surmounted by a feather. In his preface to The Adventures of Tom Bombadil, Tolkien tells us that Tom's name is 'Bucklandish in form', and suggests that it was given to him by the Hobbits of that region.