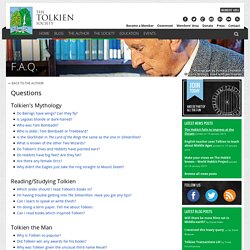 In the ‘The Bridge of Khazad-dûm’ Tolkien merely says the Balrog “stepped forward slowly on to the bridge, and suddenly it drew itself up to a great height, and its wings were spread from wall to wall” (p. 330). When drafts of The Silmarillion were published in Morgoth’s Ring it was discovered that Tolkien wrote of Balrogs: “swiftly they arose, and they passed with winged speed over Hithlum, and they came to Lammoth as a tempest of fire.” Tom Bombadil. {{{image}}} {{{caption}}} Tom Bombadil Other names. 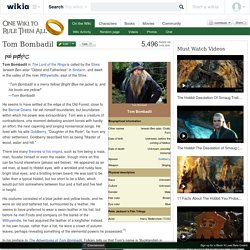 Ælfwine of England. Ælfwine is a fictional character found in various early versions of J. 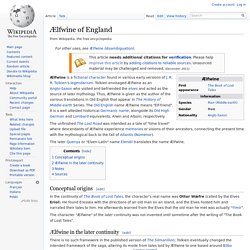 R. R. Tolkien's legendarium. Tolkien envisaged Ælfwine as an Anglo-Saxon who visited and befriended the elves and acted as the source of later mythology. Quenta Silmarillion. Quenta Silmarillion is a collection of fictional legends written by the high fantasy writer J. 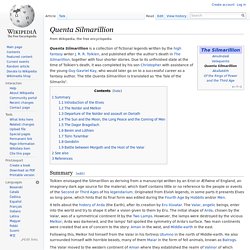 R. R. Tolkien, and published after the author's death in The Silmarillion, together with four shorter stories. Due to its unfinished state at the time of Tolkien's death, it was completed by his son Christopher with assistance of the young Guy Gavriel Kay, who would later go on to a successful career as a fantasy author.

Middle-earth cosmology. This is an overview of . Each entry is followed by any alternative names, any roughly corresponding primary world name in parentheses, and a brief description. A question mark after the primary world name indicates that the identification may be partially speculative or disputed. Fëa and hröa. In J. 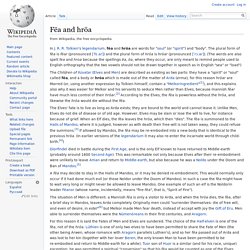 R. R. Tolkien's legendarium, fëa and hröa are words for "soul" (or "spirit") and "body". The plural form of fëa is fëar (pronounced [ˈfɛ.ar]) and the plural form of hröa is hröar (pronounced [ˈrɔ.ar]). (The words are also spelt fea and hroa because the spellings ëa, öa, where they occur, are only meant to remind people used to English orthography that the two vowels should not be drawn together in speech as in English "sea" or "load") The Elves' fate is to live as long as Arda exists; they are bound to the world and cannot leave it. Aulë. Fictional details[edit] As Aulë is a smith, he is the Vala most similar in thought and powers to Melkor, in that they each gloried in the fashioning of artful and original things. 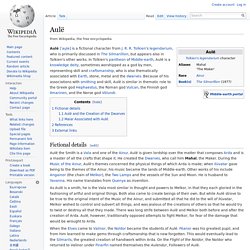 Both also came to create beings of their own. Atar. Atar[pronunciation?] 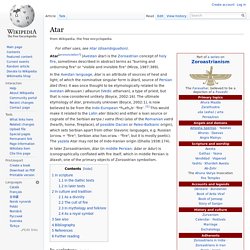 (Avestan ātar) is the Zoroastrian concept of holy fire, sometimes described in abstract terms as "burning and unburning fire" or "visible and invisible fire" (Mirza, 1987:389). In the Avestan language, ātar is an attribute of sources of heat and light, of which the nominative singular form is ātarš, source of Persian āteš (fire). It was once thought to be etymologically related to the Avestan āθrauuan / aθaurun (Vedic atharvan), a type of priest, but that is now considered unlikely (Boyce, 2002:16). The ultimate etymology of ātar, previously unknown (Boyce, 2002:1), is now believed to be from the Indo-European *hxehxtr- 'fire'. [1] This would make it related to the Latin ater (black) and either a loan source or cognate of the Serbian ватра / vatra (fire) (also of the Romanian vatră (hearth, home, fireplace), of possible Dacian or Paleo-Balkanic origin), which sets Serbian apart from other Slavonic languages, e.g. 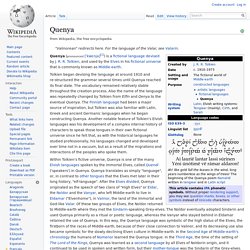 For the language of the Valar, see Valarin. Tolkien began devising the language at around 1910 and re-structured the grammar several times until Quenya reached its final state. Tom Bombadil. From Wikipedia, the free encyclopedia Tom Bombadil is a supporting character in J. 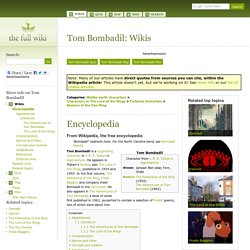 R. R. Tolkien's legendarium. Lord of the Rings Fanatics Archive. Archive Home > Movies - The Fellowship of the Ring Huorn of Fangorn Points: 956 Posts: 1119 Joined: 01/Jan/2004 ...o.k that thread title is a little misleading, but seeing as you are here now. 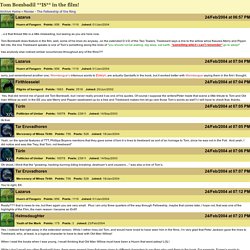 Tom Bombadil does feature in the film, well, some of his lines do anyway...on the extended D.V.D of the Two Towers, Treebeard says a line to the willow whos fissures Merry and Pippin fall into, the line Treebeard speaks is one of Tom’s something along the lines of "you should not be waking, dig deep, eat earth, *something which i can’t remember* go to sleep! " has anybody else noticed similar occurrences throughout any of the films?!? Sorry, just remembered another one, Wormtongue’s infamous words to Eowyn, are actually Gandalfs in the book, but it worked better with Wormtongue saying them in the fiml i thought. Pilgrim of Isengard Points: 1663 Posts: 3518 Joined: 20/Jun/2002 Yes, that did remind me of good old Tom Bombadil, but I never really proved it as one of his quotes.