Clean Up Your Mess - A Guide to Visual Design for Everyone 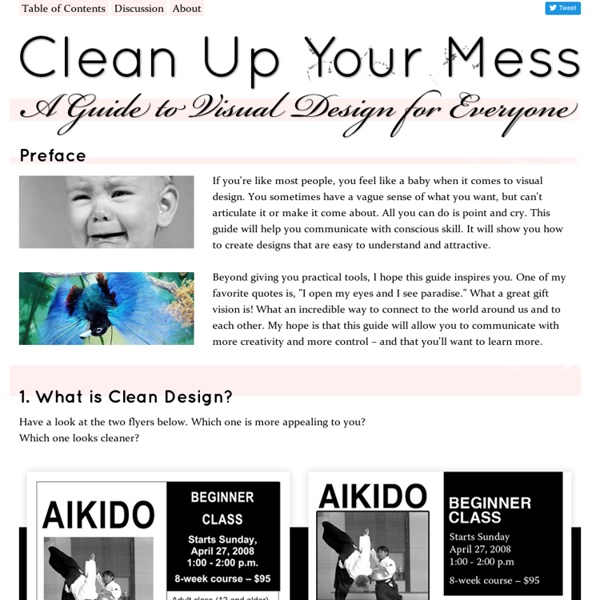 Preface If you're like most people, you feel like a baby when it comes to visual design. You sometimes have a vague sense of what you want, but can't articulate it or make it come about. All you can do is point and cry. This guide will help you communicate with conscious skill. It will show you how to create designs that are easy to understand and attractive.

Pictogram rock posters This is my most ambitious, and maybe also the best, personal work I’ve done so far. I decided to pick a few bands and artists from the rock genre and make pictogram posters for them. Instead of just putting one single pictogram in each poster, like in my previous ‘Pictogram music posters’, I made as many as I could possibly come up with for each artist, and jammed them into one single poster. There is a total of 234 song pictograms in these posters. I started this project Jan 15th 2012, so I’ve been working on this for about five months. Kickstarter's Ultimate Success Story: Nano Wristbands Raise $1 Million It's the ultimate Kickstarter success story. Unable to secure a manufacturer, the Chicago-based designer Scott Wilson placed his TikTok and LunaTik wristbands -- which convert the Nano into a watch -- on the funding site. Within a month, he raised nearly $1 million from 13,500 backers -- a Kickstarter record. All of a sudden, retailers came calling, including the most prestigious of all: Apple, which is rolling out the wristbands in North American stores this week. "A lot of people just don't have the instincts to know whether it's going to sell, so they just don't want to gamble," Wilson says.

David Byrne’s Hand-Drawn Pencil Diagrams of the Human Condition by Maria Popova “Science’s job is to map our ignorance.” David Byrne may have authored both one of last year’s best albums and best music books, but he is also one of the sharpest thinkers of our time and a kind of visual philosopher. About a decade ago, Byrne began making “mental maps of imaginary territory” in a little notebook based on self-directed instructions to draw anything from a Venn diagram about relationships to an evolutionary tree of pleasure — part Wendy MacNaughton, part Julian Hibbard, yet wholly unlike anything else. In 2006, Byrne released Arboretum (UK; public library), a collection of these thoughtful, funny, cynical, poetic, and altogether brilliant pencil sketches — some very abstract, some very concrete — drawn in the style of evolutionary diagrams and mapping everything from the roots of philosophy to the tangles of romantic destiny to the ecosystem of the performing arts.

Autodesk Releases Free App That Brings 3-D Printing To The Masses [Video] If you hear "maker culture" and instantly think of grease-stained weirdos who drone on about steampunk and "screws not glue"... well, you wouldn't be wrong. But when a giant software company like Autodesk throws its weight behind "makers," you know it's much more than a subculture. "There was this huge digital content generation that emerged, but now that 'Generation C' is turning into 'M,' the Make generation," Tatjana Dzambazova, Senior Product Manager at Autodesk, tells Co.Design. "They want to start physically fabricating the things that they create digitally."

How To Create a Detailed Vector Sugar Skull Illustration Follow this Illustrator design tutorial to create a super detailed sugar skull illustration made from lots of sweet vector elements. We’ll use a mix of basic and advanced Illustrator tools to build various decorative objects to slowly build up the features until we have an awesome looking skull design that pays homage to the Mexican Dia de los Muertos tradition. View full size illustration Sugar skull originated as part of the festivities of the Mexican Day of the Dead (Dia de los Muertos) holiday. The traditional sugar skull is a sweet treat that’s decorated with lots of bright and colourful designs, which makes it a popular source of inspiration for designers and illustrators.

A Collection of Printable Sketch Templates and Sketch Books for Wireframing At the beginning of a web (or application) development project I always create the sketches first. While sketching can be done on a blank paper, it’s much better to use a sketch template. For me that is the best and most productive way to work on and improve my ideas before application development begins (and things get more complicated :-)). This way I won’t pay too much attention to some details that should be taken care of later, but stay focused on general layout and functionality. Below you will find more than 20 resources that you can use in sketching phase of application development. 19. Quest to Learn : Imagination: Creating the Future of Education & Work 19. Quest to Learn Video: Katie Salen discusses Quest 2 Learn in a six part series on Big Think.

Information Visualization Manifesto Posted: August 30th, 2009 | Author: Manuel Lima | Filed under: Uncategorized | – “The purpose of visualization is insight, not pictures” Ben Shneiderman (1999) – Over the past few months I’ve been talking with many people passionate about Information Visualization who share a sense of saturation over a growing number of frivolous projects. The criticism is slightly different from person to person, but it usually goes along these lines: “It’s just visualization for the sake of visualization”, “It’s just eye-candy”, “They all look the same”. When Martin Wattenberg and Fernanda Viégas wrote about Vernacular Visualization, in their excellent article on the July-August 2008 edition of interactions magazine, they observed how the last couple of years have witnessed the tipping point of a field that used to be locked away in its academic vault, far from the public eye.