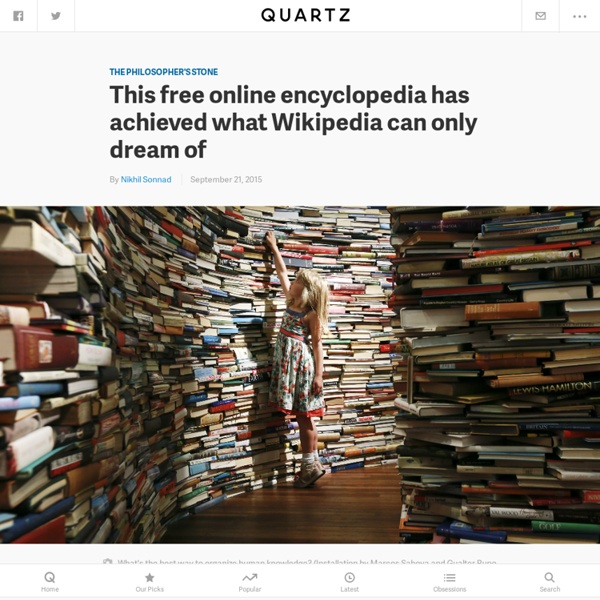 The Stanford Encyclopedia of Philosophy may be the most interesting website on the internet. Not because of the content—which includes fascinating entries on everything from ambiguity to zombies—but because of the site itself. Its creators have solved one of the internet’s fundamental problems: How to provide authoritative, rigorously accurate knowledge, at no cost to readers. It’s something the encyclopedia, or SEP, has managed to do for two decades. The internet is an information landfill. Somewhere in it—buried under piles of opinion, speculation, and misinformation—is virtually all of human knowledge. The story of how the SEP is run, and how it came to be, shows that it is possible to create a less trashy internet—or at least a less trashy corner of it. The impossible trinity of information The online SEP has humble beginnings. That makes it positively ancient in internet years. The SEP is neither pre-internet, nor is it ossified. Where other encyclopedias fall short Landfill no more

Sister God, by Betsy Cornwell Snow White. Heinrich Leutemann or Carl Offterdinger, late nineteenth century When I was three or four years old, I started to grow afraid that I was evil. That year I had the worst nightmare of my life thus far: intense, consuming, and hyper real in the way that only very young children’s nightmares can be. In it, I walked from my bedroom down the creaking stairs of our two-hundred-year-old New Hampshire farmhouse, drawn inexorably toward the warped glass panes that framed our front door. Outside was black dark, a hot and windy late summer night. From Prostitute to Professor: The 7 Lessons of Maya Angelou's Messy Life  The death of Dr. Maya Angelou provided us the opportunity to once again delight in her memoirs, which chronicle the eclectic, bohemian first half of her life. Yet, we know from her writings that such praise was often withheld as she pursued her dreams of being a dancer and poet while raising a young child as a single mother. How many times must she have been urged to settle down and give up her artistic and cultural pursuits, which time and time again left her broke and broken? While we now refer to Angelou as a renaissance woman, until she published I Know Why The Caged Bird Sings in her 40s, her life resembled what is referred to in ghetto parlance as a hot mess.

Nicholas Miklouho-Maclay Nicholas Miklouho-Maclay (Russian: Николай Николаевич Миклухо-Маклай;[1] 1846–1888) was a Russian explorer, ethnologist, anthropologist and biologist, who became famous as the first scientist to settle among and study people who had never seen a European.[2] The Sinhalese endowed him with a second surname, Maclay, which means "giver of food," as well as the honorific "Slamat," which means "good." Miklouho-Maclay spent the major part of his life travelling and conducted scientific research in the Middle East, Australia, New Guinea, Melanesia and Polynesia. Australia became his adopted country and Sydney the home town of his family.[3][4]

Contents Andrew Chrucky e-mail: ditext@ditext.com Online Papers and Books Anarchism: The Unfinished RevolutionPhilosophy of Liberal Education Meta-Encyclopedia of Philosophy Links seven outstanding dictionaries and encyclopedias on the internet under one set of entries. Problems from Wilfrid Sellars Comprehensive bibliographies of works by and on Wilfrid Sellars, including many unpublished correspondences. Authors and Works Cited by Wilfrid Sellars A compiled bibliography of references cited by Sellars. Philosophical Alternatives from C.

Taylor Swift's Fourth of July Instagram feed is ruining friendship for normal people — Quartz “The only way to stop a bad guy with a gun is with a good guy with a gun,” National Rifle Association (NRA) executive vice president Wayne LaPierre infamously declared following the Newtown, Connecticut school shootings in 2012. The vision of armed heroes killing armed villains and preventing loss of life is a staple of the NRA narrative, as well as of Hollywood films. In Dallas, though, it didn’t work that way. Following a peaceful Black Lives Matter protest, at least one sniper opened fire on police. 7 Secrets Of People Who Have It All Together You know them: Those people who seem to glide through life effortlessly. They get through the workday without getting flustered, usually looking great while doing it. They don’t seem to struggle with juggling the demands of work and life. They just have their acts together. Do they know something we don’t?

The Russian anthropologist who refuted racist scientific theories In the mid-19th century when European expansionist power was at its peak, anthropologists and the scientific fraternity in the West circulated racist theories that attempted to justify slavery and colonialism. Nicholas Miklouho-Maclay, a scientist, who was born in what is now Russia’s Novgorod Region, was at the forefront of fighting these theories. “Europeans only believed in liberty, equality and fraternity for other Europeans, while at the same time propagating ‘master race’ and ‘natural selection’ theories that said the people of color were meant to serve the white man,” says Dhara Wettasinghe, a Sri Lankan anthropologist, who studies the work of Miklouho-Maclay.

The Ultimate Guide for Becoming an Idea Machine The way to have good ideas is to get close to killing yourself. It’s like weightlifting. When you lift slightly more than you can handle, you get stronger. In life, when the gun is to your head, you either figure it out, or you die. When you cut yourself open, you bleed ideas. If you’re broke and close to death, you have to start coming up with ideas. Kierkegaard on Our Greatest Source of Unhappiness “How we spend our days is, of course, how we spend our lives,” Annie Dillard memorably wrote in reflecting on why presence matters more than productivity. “On how one orients himself to the moment depends the failure or fruitfulness of it,” Henry Miller asserted in his beautiful meditation on the art of living. And yet we spend our lives fleeing from the present moment, constantly occupying ourselves with overplanning the future or recoiling with anxiety over its impermanence, thus invariably robbing ourselves of the vibrancy of aliveness. In a chapter of the altogether indispensable 1843 treatise Either/Or: A Fragment of Life (public library), the influential Danish thinker Søren Kierkegaard (May 5, 1813–November 11, 1855), considered the first true existentialist philosopher, explores precisely that — how our constant escapism from our own lives is our greatest source of unhappiness. In a latter chapter, titled “The Unhappiest Man,” he returns to the subject and its deeper dimension:

The Wizard of Oz as a Parable, by Lillian Firestone The Wizard of Oz (MGM Studios, 1939) What makes the Wizard of Oz an iconic American tale that has entered into the language? Some expressions are so well known they need no further explanation, as for example “You’re not in Kansas anymore”. According to author Steve Adams in his searching new study The Wizard of Oz as a Parable, it is an allegorical tale of the soul’s journey along the spiritual path, which in the story is called “the yellow brick road”. Is This the Only Investing Advice You Need? Harold Pollack Wall Street and its representatives often make investing more complicated than necessary to give investors the idea that they are helpless on their own. University of Chicago professor Harold Pollack has gained acclaim recently for insisting that all the important financial advice you need can fit on one side of a 4x6 index card.

Source Clips Marathon County Pommersch Female speaker, born 1903, Hamburg, Marathon County, WI. Date/Place of Interview: June 18, 1968, Marathon County, WI. Interviewer: J??rgen Eichhoff NAGDA Record Number: EIC 20 1:05 County: Marathon State: WI Alain de Botton questions what we think we know about love - ABC Conversations with Richard Fidler Philosopher Alain de Botton confronts some romantic notions about falling in love and living happily ever after. Philosopher Alain de Botton wrote his Essays on Love in his early 20s. Now he's returned to the subject, with a novel that challenges many assumptions about falling in love and what comes next. Alain says most 'love stories' are about the start of love and our romantic notions may actually work against the relationship.