Category:Media about Internet culture. PopUrls. PopUrls was acquired by Idealab in July 2010 for an undisclosed amount. 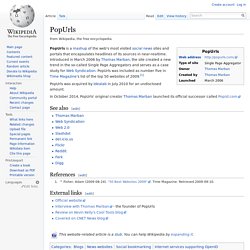 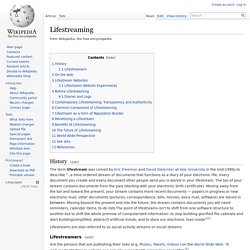 Lifestreamers[edit] Are the persons that are publishing their lives (e.g. Photos, Tweets, Videos ) on the World Wide Web. "A well-made lifestream website can provide support with organizing one’s life".[2] On the web[edit] Social network aggregators adapt Freeman and Gelernter's original concept to address the vast flows of personal information and exchange created by social network services such as MySpace or Facebook ("Web companies large and small are embracing this stream" of providing lifestreaming.[3]) Other online applications have emerged to facilitate a user's lifestream. Catégorie:Site web d'actualité.

Web Soup. During the first two seasons, this show was taped in front of a green screen like The Soup. 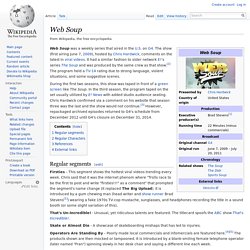 In the third season, the program taped on the set usually utilized by E! News with added studio audience seating. Chris Hardwick confirmed via a comment on his website that season three was the last and the show would not continue.[3] However, repackaged archived episodes returned to G4's schedule from December 2012 until G4's closure on December 31, 2014. Regular segments[edit] Firsties – This segment shows the hottest viral videos trending every week.

That's Un-Incredible! Skate or Almost Die - A showcase of skateboarding mishaps that has led to injuries. Operators Are Standing By – Poorly made local commercials and infomercials are featured here.[4][5] The products shown are then mocked or lampooned. Local News: Slowly Dying, But Still Funny – Embarrassing stories and moments from local newscasts are often aired. Twittershots!! This Week In FAIL! Why Are You Friends? Is That Really a Thing?! Burning Love (TV series) Season one showcases fireman Mark Orlando (Ken Marino) as the bachelor. 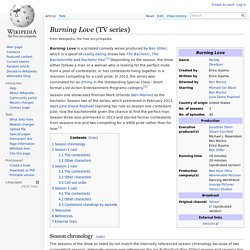 Season two of the series, which premiered in February 2013, stars June Diane Raphael reprising her role as season one contestant Julie, now the bachelorette given the chance to find the perfect man. Season three also premiered in 2013 and starred former contestants from seasons one and two competing for a $900 prize rather than for love.[3] Review aggregator. A review aggregator is a system that collects reviews of products and services (such as films, books, video games, software, hardware and cars). 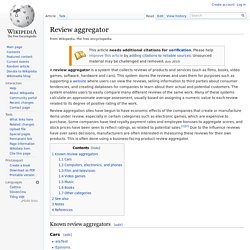 This system stores the reviews and uses them for purposes such as supporting a website where users can view the reviews, selling information to third parties about consumer tendencies, and creating databases for companies to learn about their actual and potential customers. The system enables users to easily compare many different reviews of the same work. Many of these systems calculate an approximate average assessment, usually based on assigning a numeric value to each review related to its degree of positive rating of the work. Review aggregation sites have begun to have economic effects of the companies that create or manufacture items under review, especially in certain categories such as electronic games, which are expensive to purchase. Thrilling Adventure Hour. Thrilling Adventure Hour (August 2011) L-R: Josh Malina, Busy Philipps, Marc Evan Jackson, Linda Cardellini, Nathan Fillion, and Mark Gagliardi History[edit] The roots of the Thrilling Adventure Hour began in Blacker's living room where he and Acker held a reading of their film script for a space western called Sparks Nevada, Marshal on Mars. 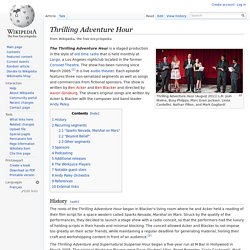 Struck by the quality of the performances, they decided to launch a stage show with a radio conceit, so that the performers had the luxury of holding scripts in their hands and minimal blocking. The conceit allowed Acker and Blacker to not impose too greatly on their actor friends, while maintaining a regular deadline for generating material, honing their craft and workshopping content in front of an audience.[2] The Thrilling Adventure and Supernatural Suspense Hour began a five-year run at M Bar in Hollywood in March 2005. In episode eight, the show was joined by Joel Spence, a Foley artist and actor. 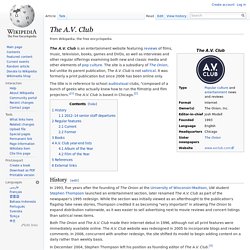 Club is an entertainment website featuring reviews of films, music, television, books, games and DVDs, as well as interviews and other regular offerings examining both new and classic media and other elements of pop culture. The site is a subsidiary of The Onion, but unlike its parent publication, The A.V. Club is not satirical. It was formerly a print publication but since 2006 has been online only.

The title is in reference to school audiovisual clubs, "composed of a bunch of geeks who actually knew how to run the filmstrip and film projectors History[edit] Both The Onion and The A.V. In December 2004, Stephen Thompson left his position as founding editor of The A.V. According to then Onion president Sean Mills, the A.V. At its peak the printed version of The A.V. 2012–14 senior staff departures[edit] On April 2, 2013, longtime film editor and critic Scott Tobias stepped down from his role as film editor of The A.V. 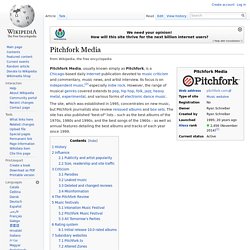 The site has also published "best-of" lists – such as the best albums of the 1970s, 1980s and 1990s, and the best songs of the 1960s – as well as annual features detailing the best albums and tracks of each year since 1999. History[edit] A previous Pitchfork logo In early 1999, Schreiber uprooted Pitchfork from its Minneapolis base and relocated to Chicago, Illinois. Category:Social cataloging applications.