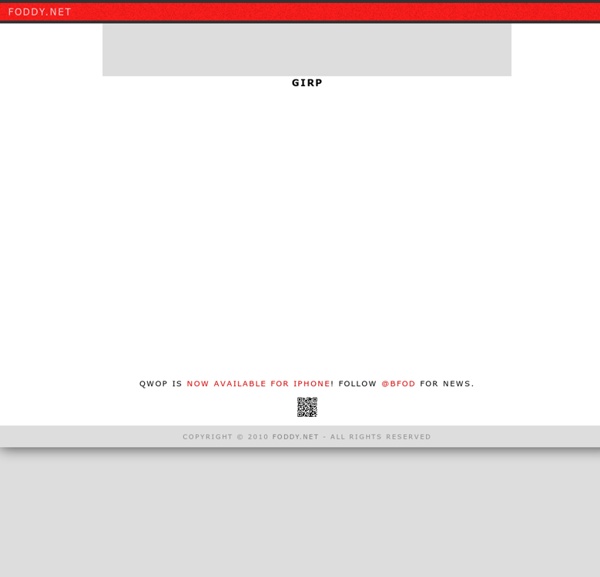 Contradiction Review: Playing Detective and Catching Lies in a Live-Action Murder Mystery « Iphone Game Reviews « App Unwrapper Contradiction By: Tim Follin Download Contradiction, by Tim Follin, is a very unique sort of murder mystery game. The entire game is made up of video footage, so it feels like you’re playing a part in a movie. I admit, I was a bit skeptical about it, as the idea sounds like it could be incredibly cheesy and come off seeming amateurish if not taken seriously. Basically, I had my doubts that something such as this could be pulled off well.

A Test of Travel Trivia Terms & Conditions 1. The organiser of this competition is Icelolly Marketing Ltd. 2. The competition starts on 24/08/2016 and ends at 23:59 on 15/09/2016. 3. One winner will be chosen by random selection using a random number generator from all valid entries within 14 days of the competition closing date. Uncanny Valley on Steam Full disclosure: review copy provided by developer/publisher! It's the end of my first week at this place. I - heh - I was excited for the quiet, for the isolation. I've learned this past week that I would kill, ♥♥♥♥ING KILL for the din of a busy restaurant, for a socially inept slacktivist with a petition to invade my personal space, even for a shouting match with my brother.

Niume Billy Mitchell is the most knowledgeable and masterful Pac-Man player ever to drop a quarter in a machine – possibly even the greatest arcade player of all time. When the Guinness Book of World Records first included a listing for video games in 1985 (discontinued in 1987), Mitchell held the records for Pac-Man, Ms. Pac-Man, Donkey Kong, Donkey Kong, Jr., Centipede, and Burger Time. Meet the secret new horror mistress of video games / Offworld The delicate, literary works of Kitty Horrorshow are some of my favorite discoveries of 2015. Join a group forging through the desert in search of a pyramid, as your skin begins to blister mysteriously away. Or explore the ruins of a sigil-painted village as the slick bodies of giant hornets lurk, swollen and sleepy with blood. Wander the suggestion of a mysterious village in continuous rain, urged onward by a pale, sad voice.

The Best Board Games for Every Holiday Situation Board games are relatively trendy right now, though not the sorts that your parents had on the top shelf of the coat closet, like the interminable Monopoly or that useless word memorization game Scrabble. The board game renaissance that started in Germany over 20 years ago, which spurred a cascade of games now called German-style or Eurogames, has reached the U.S. in full, with an array of engaging titles appearing on the shelves at Target and Barnes & Noble as well as at specialty retailers online and across the country. Whether you're looking for accessible, all-ages options for a post-dinner family session, or new challenges to explore with gaming-minded friends during your holiday break, here are 14 titles worth clearing the table for. Best bets for non-gamers Everyone will tell you to start with Catan (formerly known as Settlers of Catan), which is the best-selling Eurogame ever, and the one most responsible for the size of the market and the hobby. New options for veteran gamers