Animation: June 2013. Transferring information (like colour) between particles. A mate of mine, Joao, mentioned offhandedly that he had something he wanted to play with and that he was having trouble in Maya transferring data between particles (in this case, colour) for a shot involving colliding nParticles. 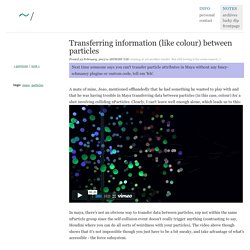 Clearly, I can't leave well enough alone, which leads us to this: In maya, there's not an obvious way to transfer data between particles, esp not within the same nParticle group since the self-collision event doesn't really trigger anything (contrasting to say, Houdini where you can do all sorts of weirdness with your particles). The video above though shows that it's not impossible though you just have to be a bit sneaky, and take advantage of what's accessible - the force subsystem. To recap (and summarise) Francesco Giroldini's Blog. Rigging « circe-characterWorks. In this article I will talk about a really common procedure that can be found in today character rig: space switching or dynamic parenting.

All the following story started after reading a post on maulik blog. His attempt at writing a group Constraint made me want to see if I would be able to came up with a stable implementation in order to use less nodes and provide a more streamlined workflow . 1) Once upon a rig…: At its core , space switching or dynamic parenting is rooted on animation constraint: the basic idea is to link an object to several “parent” and to be able to transfer this child between parent over time.

This system is usually build to keep track over which driver takes precedence in controlling an object by: Keane Art. The Animator´s Corner - NEWS. Mental Ray » 5/6 » Computer Graphics. Introduction: In this ‘Making Of’, find out how to create the character, Tiny, from the old school cartoon classic: “Battle of the Planets”..

Created In: 3D Studio Max, ZBrush and Photoshop.Concept: From my childhood memories I can remember watching Battle of the Planets after school, and as I grew up I thought about these characters, and they are now cooler than ever – amazed by their strong colours, bold designs and iconic silhouettes. So, I decided to create a character from the G-force team, choosing Tiny, simply because I think he’s probably the last choice people would make out the 5 members, yet he has one of the most unique designs and forms. As references, I gathered whatever I could find on the Internet.

Main references included cover illustrations by Alex Ross, and screen captures of the original TV show.Modelling: Initially, I blocked out the general form of the character in 3D Studio Max, to find the right proportions. Fig.01 Fig.02 Fig.03 Fig.04. Maya Spiral. Rigging Dojo » Broadcast Archive. Rigging Dojo Live : Power Python for Maya (Plus) by Jason Parks Learn some of the key features that Python and PyMEL have to offer as well as how some professional Integrated Development Environments can change the way you write tools and increase the production speed of all your art pipelines. 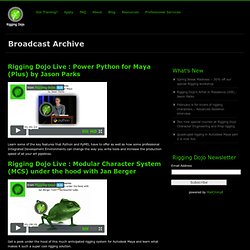 Rigging Dojo Live : Modular Character System (MCS) under the hood with Jan Berger Get a peek under the hood of this much anticipated rigging system for Autodesk Maya and learn what makes it such a super cool rigging solution. Rigging Dojo presents: Anatomy for rigging and modeling with Jeff Hesser Improve your work and understanding of joint movement in the Human Body. Uncategorized « Davidlambert120's Blog. I did a little more tweaking on the Carla head and applied an overlay of her skin from the photographs I previously took. 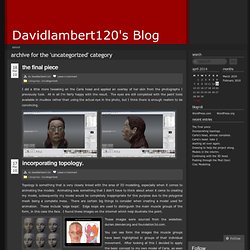 All in all I’m fairly happy with the result. The eyes are still completed with the paint tools available in mudbox rather than using the actual eye in the photo, but I think there is enough realism to be convincing. Topology is something that is very closely linked with the area of 3D modelling, especially when it comes to animating the models. Animating was something that I didn’t have to think about when it came to creating my model, subsequently my model would be completely inappropriate for this purpose due to the polygonal mesh being a complete mess.

Once "Rapunzel", then "Rapunzel Unbraided", and now "Tangled", Disney's 50th animated Feature film, set for release November 28th, has gone through many changes throughout it's years in development. 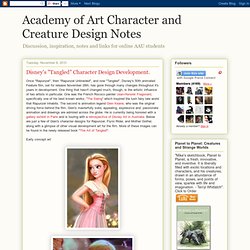 One thing that hasn't changed much, though, is the artistic influence of two artists in particular. One was the French Rococo painter Jean-Honorer Fragonard, specifically one of his best known works; “The Swing” which inspired the lush fairy tale world that Rapunzel inhabits. The second is animation legend Glen Keane, who was the original driving force behind the film. Glen's masterfully solid, appealing, expressive and passionate animation and drawings are admired across the globe. He is currently being honored with a gallery exhibit in Paris and is touring with a retrospective of Disney Art in Australia. Early concept art: 'Mother Gothel' Facial & Pose Study. Model Sheets 101-Part 2. We continue with our overview of model sheets as my students head into the last few days on their final projects. 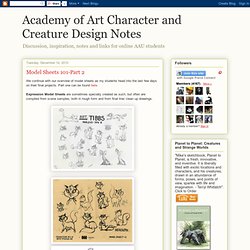 Part one can be found here. Expression Model Sheets are sometimes specially created as such, but often are compiled from scene samples, both in rough form and from final line/ clean up drawings. Note how some of these sheets include full body poses. Body language can add enormously to an expression. Just check out the body language of these characters and notice how well the action line and gestures harmonize with the facial expressions: Often times when two characters appear together frequently throughout a film, a duel model sheet featuring both characters can be created.

Obviously there are several formats for creating an engaging and effective expression model sheet. 8bitengine. [update] check out my review on Tangled here In an earlier post I raised the 2D vs 3D debate again and questioned whether we would ever reach the lifeliness of 2D animation in 3D. 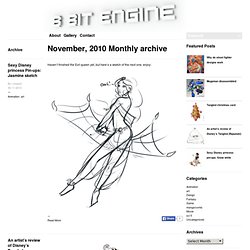 I have only seen the trailers and the snippets, but I think the new Disney movie “Tangled” might be the future for 3D animation. I watched the trailers and there’s something about the animation that has a resoundedly Disney golden years vibe. It is the first movie in years that actually looks like Aladdin (or other Disney Classics) in 3D. I also noted that the Pixar movies is one of the few 3D animatiosn in the entire industry (including games) that matches the liveliness of 2D animation.