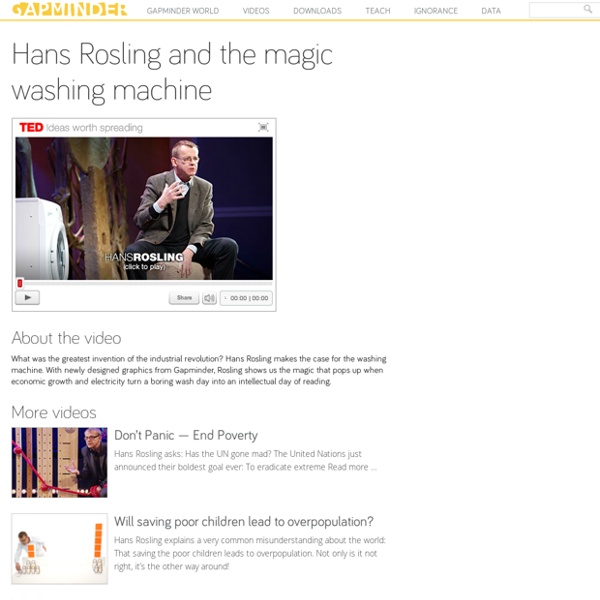 About the video What was the greatest invention of the industrial revolution? Hans Rosling makes the case for the washing machine. With newly designed graphics from Gapminder, Rosling shows us the magic that pops up when economic growth and electricity turn a boring wash day into an intellectual day of reading. More videos Hans Rosling asks: Has the UN gone mad? Hans Rosling explains a very common misunderstanding about the world: That saving the poor children leads to overpopulation. The world might not be as bad as you might believe! Hans Rosling is debunking the River of Myths about the developing world.

Hans Rosling: the man who makes statistics sing “No!” he says, almost shouting, when we meet in a function room of a utilitarian west London hotel. “Statistics take up four pages in most daily newspapers – stock values and sport [league tables]. Teaching Robots To Interact Better With Humans The 6th annual ACM/IEEE Conference on Human-Robot Interaction just ended in Switzerland this week, and Georgia Tech is excited to share three of their presentations showcasing the latest research in how humans and robots relate to each other. Let's start from the top: How Can Robots Get Our Attention? Humans rely on lots of fairly abstract social conventions when we communicate, and most of them are things that we don't even think about, like gaze direction and body orientation. Georgia Tech is using their robot, Simon, to not just try to interact with humans in the same ways that humans interact with each other, but also to figure out how to tell when a human is directing one of these abstract social conventions at the robot.

Global Emissions Global Emissions by Gas At the global scale, the key greenhouse gases emitted by human activities are: Carbon dioxide (CO2) - Fossil fuel use is the primary source of CO2. The way in which people use land is also an important source of CO2, especially when it involves deforestation. Making BI Analytics Fun Making BI Analytics Fun The search for BI insight already has a game-like feel to it. Advocates of "gamification" want to amplify this effect and immerse BI users in their task. The greatest trick Tom Sawyer ever pulled was when he convinced his friends to help him paint Aunt Polly's fence on a beautiful Saturday morning. It was a trick, to be sure, but none of Tom's friends seemed to know (or even to care) that he'd been tricked. Painting a fence is hard work -- on a splendid Saturday morning -- with a 12-year-old's mindset -- is thankless work.

A Robot's Body of Knowledge Photo: Humanoids and Intelligence Systems Lab/Karlsruhe Institute for Technology Click on the image for a larger view. 15 November 2010—Early risers may think it’s tough to fix breakfast first thing in the morning, but robots have it even harder. Even grabbing a cereal box is a challenge for your run-of-the-mill artificial intelligence (AI). Frosted Flakes come in a rectangular prism with colorful decorations, but so does your childhood copy of Chicken Little. Global Warming Effects and Causes: A Top 10 List June 7th, 2009 by Derek Markham One of the biggest issues facing us right now is global warming. Its effects on animals and on agriculture are indeed frightening, and the effects on the human population are even scarier. The facts about global warming are often debated in politics and the media, but, unfortunately, even if we disagree about the causes, global warming effects are real, global, and measurable. The causes are mainly from us, the human race, and the effects on us will be severe.

The Mobile Future: Wearables Eran Kinsbruner, Director, Product MarketingPerfecto Mobile Mobile is everywhere today — there is no denying it. And just as enterprises are catching up to the trend, another twist is coming into play: wearables. But these new technology advancements aren’t totally revolutionary; they are simply an extension of mobile. In fact, everything is starting to mobilize. 2014 will truly rewrite the rules of mobile engagement between enterprises and customers, employees and each other. But how will enterprises cope with another addition?

Nanotech breakthrough: get ready for graphene The exciting one-atom thick super material can now be produced in ample quantities and high quality. Rapid improvements in nanotechnology are now expected. Technology improvements are about to get dramatically ultra-fast. Exciting sustaining and disruptive innovations are on the way for just about every digital appliance, from touchscreen tablet computing to solar cells, according to a Science Daily report. Graphene is a new form of carbon, one atom in thickness, extremely strong and highly conducive.

10 Reasons Why 2013 Will Be The Year You Quit Your Job Editor’s note: James Altucher is an investor, programmer, author, and several-times entrepreneur. His latest books are I Was Blind But Now I See and 40 Alternatives to College. Please follow him on Twitter @jaltucher. People read TechCrunch because they want to create something, they don’t want to follow orders all of their lives, and they want financial freedom. I’m being blunt. Gross National Happiness The phrase Gross National Happiness (GNH); Wylie: gyal-yong ga'a-kyid pal-'dzoms) was coined in 1972 by Bhutan's fourth Dragon King, Jigme Singye Wangchuck. The phrase was coined as a signal of commitment to building an economy that would serve Bhutan's culture based on Buddhist spiritual values instead of the western material development that was represented by gross domestic product (GDP).[1] Slogan about Gross National Happiness in Thimphu's School of Traditional Arts.

Liquid universe Public release date: 13-Oct-2004 [ Print | E-mail Share ] [ Close Window ] UK CONTACT - Claire Bowles claire.bowles@rbi.co.uk 44-207-611-1210New Scientist Press Office, London US CONTACT – Toni Marshalltoni.marshall@newscientist.com617-558-4939New Scientist Boston office The Windows Firewall Service Fails to start – Registry Permissions - Microsoft Enterprise Networking Team As discussed in my previous posts in this series, there can be several causes that will prevent the Windows Firewall from starting. In this installment, part 3 of 5, I will cover specifics of checking registry permissions. Checking Registry Permissions You can verify the permissions in Registry Editor by right-clicking each of the following registry keys and choosing Permissions.