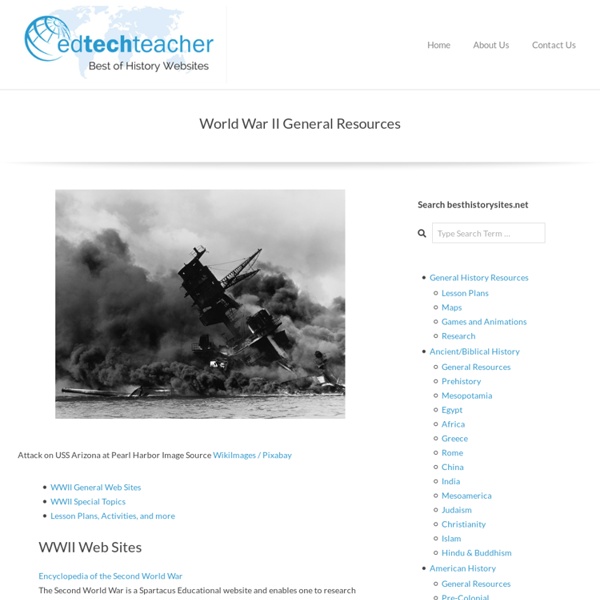 WWII Web Sites Encyclopedia of the Second World War The Second World War is a Spartacus Educational website and enables one to research individual people and events of the war in detail. The sources are “hypertexted” so that the visitor can research the newspaper, organization, etc., that produced the source. There are several subsections including those on: Background to the War; Nazi Germany, Chronology of the War, Political Leaders, European Diplomacy, Major Offensives, British Military Leaders, USA Military Leaders, German Military Leaders, Japanese Military Leaders, The Armed Forces, The Air War, The Resistance, Scientists & Inventors, War at Sea, Resistance in Nazi Germany, The Holocaust, War Artists, Weapons and New Technology. HyperWar: World War II Hyper War is a “hypertext” history of the second World War and features diplomatic and political documents. World War II Sites This site serves as a gateway to World War II sites appropriate for students and teachers. U.S.

Collections Search Search Results Searching Entering terms in the main search box will return results where those terms occur anywhere in the record. You may target your search to certain fields by changing the dropdown selection to the right of the 'Search' box from "All Fields." Facets

Lesson Plans: Dr. Seuss Dr. Seuss & WWII: Analyzing Political Cartoons Dr. Seuss is the beloved author of more than 50 children’s books. But many students do not know that he drew over 400 political cartoons during WWII. Setting the Tone: Introducing Students to World War II Any day 1 lesson—regardless of the topic—should align with and introduce goals, objectives, and essential questions for a larger unit of study. Using a backwards design approach to developing curriculum, creating individual lesson plans comes after you have determined what you want students to know and be able to do throughout the unit. A good day 1, therefore, necessitates a significant amount of planning beyond the opening activities. Some sample objectives and questions for a unit of study on World War II might include: Why, after the costs of World War I, did nations choose to fight another World War? Why were the civilian costs of World War II so much higher than World War I?

Holocaust Memorial Day Trust The Holocaust Memorial Day Trust (HMDT) is the charity that promotes and supports Holocaust Memorial Day (HMD). HMD has taken place in the UK since 2001, with a UK event and over 2,400 local activities taking place on or around 27 January each year. The UK played a leading role in establishing HMD as an international day of commemoration in 2000, when 46 governments signed the Stockholm Declaration. The UK Government had responsibility for running HMD from 2001-2005, organised through the Home Office. In May 2005 HMDT was registered as a charity (charity no: 1109348) and the then Home Secretary David Blunkett appointed HMDT Trustees for the first time. Winston Churchill's Their Finest Hour Speech I spoke the other day of the colossal military disaster which occurred when the French High Command failed to withdraw the northern Armies from Belgium at the moment when they knew that the French front was decisively broken at Sedan and on the Meuse. This delay entailed the loss of fifteen or sixteen French divisions and threw out of action for the critical period the whole of the British Expeditionary Force. Our Army and 120,000 French troops were indeed rescued by the British Navy from Dunkirk but only with the loss of their cannon, vehicles and modern equipment. This loss inevitably took some weeks to repair, and in the first two of those weeks the battle in France has been lost. I am not reciting these facts for the purpose of recrimination.

History - World War II Teaching Ideas World War II: World War 2 Day Ideas - A huge collection of ideas to try for a World War 2 Day at school. Blitz Crossword - Solve the clues to complete this crossword. Contributed by Darren Birchall. World War II Wordsearch - A wordsearch with lots of vocabulary linked to WWII. Contributed by Darren Birchall. The BBC Flew a Drone Over Auschwitz — And the Result Is Haunting Seventy years after the liberation of the Auschwitz-Birkenau concentration camp, the pre-eminent symbol of the Holocaust's horrors, the BBC is giving the world a chance to see the haunting ruins as they've never seen it before. The BBC deployed a camera-equipped drone over site, offering a chilling tour of where as many as 1.1 million people died at the hands of Nazis between 1940 and 1945. Located in southern Poland, it was the largest death camp under Adolf Hitler's "final solution." While images of Auschwitz have permeated popular culture, the under three-minute video gives a sense of the scale of the Nazi regime's systematic murder. The footage shows the railroad tracks that brought people in, the red roofs of the prison blocks where "inmates" were forced to do slave labor and the Birkenau wooden huts where the Nazis executed prisoners. The release of the footage coincides with Tuesday's official memorial service making the 70th anniversary since Auschwitz was freed by the Soviets.

Anne Frank and her family were also denied entry as refugees to the U.S. Portrait of Anne Frank at age 12, sitting at her desk at the Montessori school in Amsterdam. (Courtesy Anne Frank House, Amsterdam) Many have noted the historical parallels between the current debate over Syrians seeking refuge in the United States and the plight of European Jews fleeing German-occupied territories on the eve of World War II. Meet America's veterans About this Skype lesson Our museum in Central Illinois is staffed by military veterans from World War II, Korea, Vietnam, Grenada, Iraq and Afghanistan. Our veterans already enjoy speaking about their personal experiences with students on field trips and would like to try some Skype calls to schools. Simulations Can Change the Course of History . . . Classes I went to a Professional Development workshop several years ago with a master history teacher, Eric Rothschild, who spent his career teaching at Scarsdale High School. He was a brilliant workshop facilitator, and I learned more about teaching history in that workshop than in any other professional development experience I'd had up to that point in my career. He ran a workshop on teaching AP U.S.

What Americans thought of Jewish refugees on the eve of World War II The results of the poll illustrated above by the useful Twitter account @HistOpinion were published in the pages of Fortune magazine in July 1938. Fewer than 5 percent of Americans surveyed at the time believed that the United States should raise its immigration quotas or encourage political refugees fleeing fascist states in Europe — the vast majority of whom were Jewish — to voyage across the Atlantic. Two-thirds of the respondents agreed with the proposition that "we should try to keep them out." [Yes, the comparison between Jewish and Syrian refugees matters] To be sure, the United States was emerging from the Great Depression, hardly a climate in which ordinary folks would welcome immigrants and economic competition.