How to make a Car - Powered Car - Very Simple 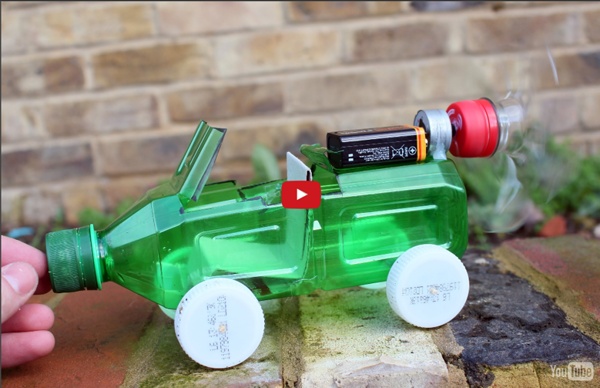 The Universal Language of Engineering Drawings Summary Students practice the ability to produce clear, complete, accurate and detailed design drawings through an engineering design challenge. Using only the specified materials, teams are challenged to draw a design for a wind-powered car. Then, they trade engineering drawings with another group and attempt to construct the model cars in order to determine how successfully the original design intentions were communicated through sketches, dimensions and instructions.

Launcher - Document Download – TeacherGeek Make It Your Own: The documents for this activity are available in PDF and Microsoft Word format. If you wish to edit a document, simply download the Microsoft Word format. Download the Out of the Classroom Version This document has everything you need to do the Ping-Pong Ball Launcher Activity "Just for Fun". Start by building the example Launcher, then go straight into the Design & Engineering Challenges to make it your own unique design.

20 insanely creative ways to repurpose your old denim jeans A *green* journal. By Life Made Creations Wine Bag Repurpose – from pant legs to wine bags DIY recycled denim basket How to make slippers from jeans Drop-Dead Denim: One Tough Pouf geda:gsch2pcb_tutorial [gEDA Project Wiki] Translations of this page are also available in the following languages: Русский. This is a tutorial on the process of using gsch2pcb as an interface between gschem and PCB. It assumes the gEDA, PCB and gsch2pcb packages are already installed and ready to use. Starting with gEDA 20030901, gsch2pcb is packaged with gEDA and doesn't need to be separately installed. This tutorial is functional and intended to generate results as quickly as possible.

Rocket-Propelled Toy Car Step #1: PrevNext This is the stuff you will need to make the rocket propelled toy car.Hint: Use only a good quality soda straw.Hint: Use a good quality balloon. Also, it is wise to limber up the balloon by blowing it up a few times before using it in this project. This will make it easier to blow up using the straw.The smallest Lego wheels work best.Any duct tape will work. I used red because it is more colorful. Wiggle-Bots - Doodling, Scribbling, Drawing, Racing Bots – TeacherGeek Wiggle-Bots are motorized contraptions that are designed and built by kids. Wiggle-Bots are much more than "a lot of fun". They inspire. Watch eyes widen as wires are connected and Wiggle-Bots start to move. See how understanding and design evolves through experimentation and tinkering. Appreciate the challenge of going beyond step by step instructions and creating something completely new and innovative.

Getting Started With PCB Table of Contents This document is a manual for PCB, the interactive printed circuit board layout system. 1 Introduction PCB includes a stand-alone program (called pcb) which allows users to create, edit, and process layouts for printed circuit boards, as well as a library of footprint definitions for commonly needed elements. While originally written for the Atari, and later rewritten for Unix-like environments, it has been ported to other operating systems, such as Linux, MacOS/X, and Windows. Runaway Train: Investigating Speed with Photo Gates Summary Students conduct an experiment to determine the relationship between the speed of a wooden toy car at the bottom of an incline and the height at which it is released. They observe how the photogate-based speedometer instrument "clocks" the average speed of an object (the train). They gather data and create graphs plotting the measured speed against start height. After the experiment, as an optional extension activity, students design brakes to moderate the speed of the cart at the bottom of the hill to within a specified speed range.

Sensational Straws - 10 Sensory Ideas - Special-ism Random national observances can provide great inspiration for sensory diet fun. Take National Drinking Straw Day, for instance. This little-known observance was celebrated on January 3 in honor of the invention and patenting of the paper drinking straw by Marvin C. Stone in 1888. However, fabulous sensory fun can be had with drinking straws all year round. Arduino UNO Tutorial 6 - Rotary Encoder Arduino UNO Tutorial 6 - Rotary Encoder We have written a tutorial for Rotary Encoders using a Microchip microcontroller but now would be a good time to make an Arduino UNO version. With a rotary encoder we have two square wave outputs (A and B) which are 90 degrees out of phase with each other. The number of pulses or steps generated per complete turn varies. The Sparkfun Rotary Encoder has 12 steps but others may have more or less. The diagram below shows how the phases A and B relate to each other when the encoder is turned clockwise or counter clockwise.