National Bureau of Statistics of China 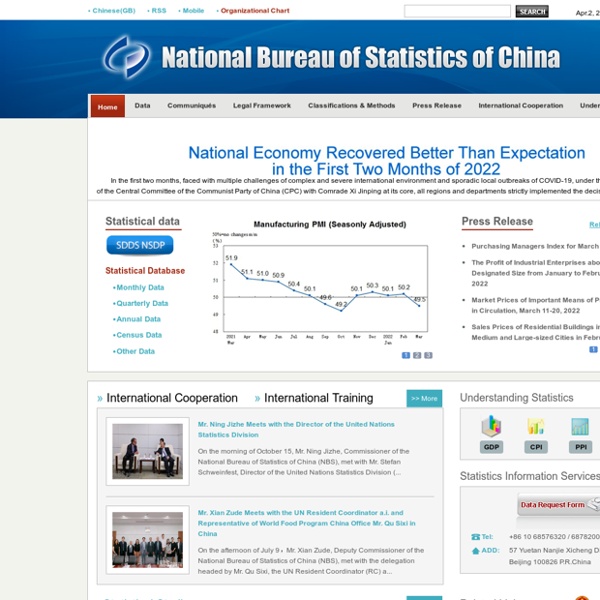 China-Australia Free Trade Agreement: Pros and cons Updated 21 Oct 2015, 12:33amWed 21 Oct 2015, 12:33am There are pros and cons of the Federal Government's free trade deal with China. We look at the potential benefits, which groups have missed out, and areas in which some analysts and fair trade campaigners say Australia will be worse off. Potential benefits for Australia: Potential negatives for Australia: Topics: trade, agribusiness, international-aid-and-trade, business-economics-and-finance, australia, china

World Economic Outlook Database May 2001 Changes to the database: May 2001 Greece is included in the euro area. Cyprus is included in Advanced Economies. It was previously included in Middle East and Europe under Developing Countries. The WEO database is created during the biannual World Economic Outlook (WEO) exercise, which begins in January and June of each year and results in the WEO publication, which is released in May and October. The WEO exercise is coordinated by the World Economic Studies Division in the Research Department. WEO projections are prepared by the country desk economists in area departments on the basis of internationally consistent assumptions about world economic activity, exchange rates, and conditions in international financial and commodity markets. How the WEO estimates differ from those in International Financial Statistics The data appearing in the World Economic Outlook are provided to the Research Department at the time of the WEO exercise, not on a continual basis. Data and File Conventions

Chinese media, marketing, advertising, and urban life - Danwei China country profile China is the world's most populous country. It has a continuous culture stretching back nearly 4,000 years and originated many of the foundations of the modern world. The People's Republic of China was founded in 1949 after the Communist Party defeated the nationalist Kuomintang, who retreated to Taiwan, creating two rival Chinese states - the People's Republic on the mainland and the Republic of China based on Taiwan. After stagnating for decades under the rigid totalitarian socialism of founder Mao Zedong, China reformed its economy along partly capitalist lines to make it one of the world's fastest-growing, as well its leading exporter. China is now a major overseas investor, and is pursuing an increasingly assertive foreign and defence policy. But economic change has not been matched by political reform, and the Communist Party retains a tight grip on political life and much of wider society. See more country profiles - Profiles compiled by BBC Monitoring Getty Images Image copyright AFP

Asia Times Country economic review People's Republic of China This report is reproduced with the kind permission of the Asian Development Bank (adb.org) 1. Executive summaryThe People's Republic of China (PRC) successfully weathered the Asian crisis. Strong economic growth continued in the first three quarters of 2000 when grossdomestic product (GDP) grew by 8.2 percent. After a marked slowdown in the aftermath of the Asian crisis, PRC's exports have grownstrongly, beginning in mid-1999 and continuing in 2000. There is scope for continuing the accommodative stance of monetary policy without causing undue inflationary pressure. Overall, the macroeconomic outlook over 2001-2003 is positive:(i) Robust annual GDP growth in the 7-7.5 percent range;(ii) Moderate annual inflation in the 2-3 percent range, and;(iii) Comfortable external payments position despite a gradually declining current account surplus. Adjusting for these factors, the fiscal situation is weaker than it appears and has the potential to pose a constraint on sustained economic growth.

Global Times The World Factbook ShowIntroduction :: CHINA Panel - Collapsed For centuries China stood as a leading civilization, outpacing the rest of the world in the arts and sciences, but in the 19th and early 20th centuries, the country was beset by civil unrest, major famines, military defeats, and foreign occupation. After World War II, the Communist Party of China under MAO Zedong established an autocratic socialist system that, while ensuring China's sovereignty, imposed strict controls over everyday life and cost the lives of tens of millions of people. After 1978, MAO's successor DENG Xiaoping and other leaders focused on market-oriented economic development and by 2000 output had quadrupled. For much of the population, living standards have improved dramatically but political controls remain tight. Population Pyramid A population pyramid illustrates the age and sex structure of a country's population and may provide insights about political and social stability, as well as economic development.