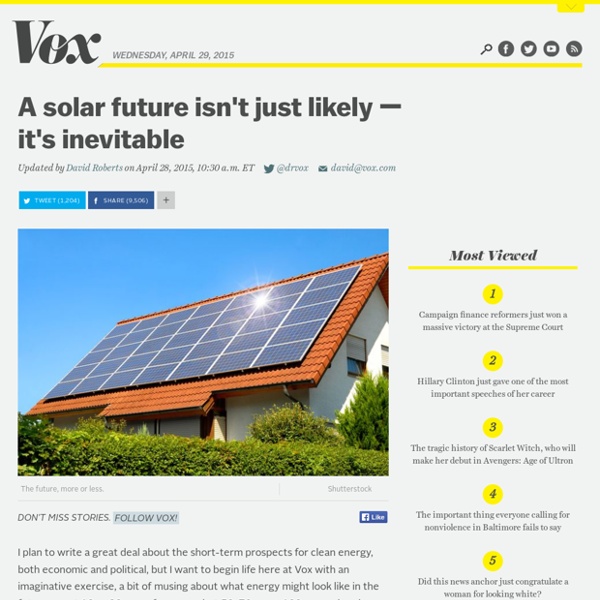 I plan to write a great deal about the short-term prospects for clean energy, both economic and political, but I want to begin life here at Vox with an imaginative exercise, a bit of musing about what energy might look like in the future — not 10 or 20 years from now, but 50, 70, even 100 years ahead. Obviously, predicting the far future is a mug's game if you take it too seriously. This post is more about storytelling, a way of seeing the present through a different lens, than pure prognostication. But storytelling is important. And insofar as one can feel confident about far-future predictions, I feel pretty good about this one. Here it is: solar photovoltaic (PV) power is eventually going to dominate global energy. The main reason is pretty simple: solar PV is different from every other source of electricity, in ways that make it uniquely well-suited to 21st-century needs. Solar PV is different from other electricity sources — in one crucial way But not much energy.

The global economy’s weird problem is that we have too much stuff It ought to be a good thing that human society is richer than ever before, so rich that the storage tanks in Cushing, Okla., are nearly overflowing with crude oil and some 110 million bales of cotton are sitting in warehouses around the world, as Josh Zumbrun and Carolyn Cui report in The Wall Street Journal. The problem is that policymakers don't quite know how to handle the surplus, which challenges some basic principles of conventional economics and is causing all kinds of mischief: The current state of plenty is confounding on many fronts. The surfeit of commodities depresses prices and stokes concerns of deflation. Vulcan Real Estate Makes News by Going Salmon Safe Tuesday, 07 July, 2015 13:31Last Updated on Tuesday, 07 July, 2015 13:32Written by Stewardship Partners On June 8th, 2015, Vulcan Inc. announced its Commitment to Action with the Clinton Foundation’s Clinton Global Initiative (CGI) for urban watershed protection and restoration through sustainable development practices that align with Salmon-Safe environmental certification. The public announcement occurred in early June at the CGI America 2015 conference in Denver, Colo., which brings together various leaders from across industries for a think-tank style multi-day engagement focused on developing solutions for economic growth. At CGI America, Ada M.

The New Tesla Home Battery Powered By Solar Will Make Off Grid Living Mainstream One of the brains behind Tesla motors and Paypal, Tesla Motors CEO and entrepreneur Elon Musk has a new invention up his sleeve that will help power homes at low cost, and it will make living off-grid easier than ever. A Florida woman had to stand up to a local judge to continue living off grid when he declared it illegal, but if millions of people start to live more self-sufficiently and sustainably, what will the corrupt judiciary say then? Musk’s new invention is based on Tesla’s lithium-ion battery technology, and the new battery is expected to help the company become a leader in the growing home energy-storage market. “We are going to unveil the Tesla home battery, the consumer battery that would be for use in people’s houses or businesses fairly soon,” Bloomberg quoted Musk as saying. Not only does this mean that people could tell their electric company (and their high bills) good-bye, better lithium-ion storage also means that even solar arrays would work better.

Why the Word "Transhumanism" Should Bother You, Too Want to have the ability to move things around with your mind, print out any new body parts you might need, including organs, and be able to work from home every day via a completely convincing virtual reality setup? All of these things are not only within reach, according to a movement that is gaining traction more rapidly than almost any other in history, but they are inevitably happening within the next 30 years. Many authors (myself included) struggle to give a name to this incredible movement, instead deferring to the event where all of this converging technology culminates in a brand new way of life for all human beings, utterly different in ways we aren't capable of imagining with our "unaugmented" human brains: the Technological Singularity.

A Practical Utopian’s Guide to the Coming Collapse – David Graeber on “The Phenomenon of Bullshit Jobs” Graeber’s argument is similar to one he made in a 2013 article called “On the Phenomenon of Bullshit Jobs”, in which he argued that, in 1930, economist John Maynard Keynes predicted that by the end of the century technology would have advanced sufficiently that in countries such as the UK and the US we’d be on 15-hour weeks. “In technological terms, we are quite capable of this. And yet it didn’t happen.

Do You Live in a Resilient City? Climate Change, Resilience, Revalue Ecosystems, Secure Livelihoods, Transform Cities A version of this post originally appeared on 100 Resilient Cities. 1. Your commute options aren’t limited to a car. Cover Charge: New Spray-On Battery Could Convert Any Object into an Electricity Storage Device Perhaps someday you'll need to go to the store because you ran out of cathode paint. A team of researchers has just announced a new paint-on battery design. The technique could change the way batteries are produced and eliminate restrictions on the surfaces used for energy storage. The paint-on battery, like all lithium ion batteries, consists of five layers: a positive current collector, a cathode that attracts positively charged ions, an ion-conducting separator, an anode to attract negative ions, and a negative current collector.

Cost of lab-grown burger patty drops from $325,000 to $11.36 Back in 2013, ‘test-tube’ hamburgers hit headlines across the Internet, and not just because scientists had managed to more-or-less replicate meat in the lab. It was a commendable feat, especially because it offered a potential solution to the increasingly unsustainable practice of cattle farming, but then we heard about the price tag. Who’s up for a $325K burger made from cultured muscle tissue cells? Anyone? The home that pays its own utility bill (and then some) Imagine opening your monthly utility statement to find a check instead of a bill. That dream may become a reality as more architects design buildings that generate more energy than they use. In Britain, the first low-cost version of just such a home is opening Thursday, marking the country’s initial forays into an emerging global market for so-called energy-positive or net-positive housing – solar-powered homes so efficient, they can generate more power than they consume. It’s the gold standard for green homes, and a concept that has begun to take off around the world.

Israeli firm developing electricity-generating roads Tiny piezoelectric crystals embedded in the road generate electricity when driven over A group of Israeli engineers have created a system that allows certain types of roads to generate electricity just by driving over them. The Israeli engineers behind the project claim that a 1km stretch of the power-generating asphalt will generate 400kW - enough power to run eight small cars. The system works by embedding tiny piezoelectric crystals into the road. Robot chef that can cook any of 2,000 meals at tap of a button to go on sale in 2017 - Factor It’s nowhere near on the scale of the hundreds of thousands of miles that Google’s autonomous vehicles have travelled in California and Austin, but the UK has got its own driverless cars. Announced earlier this year, the scheme is seeing a number of different vehicles being tested in the country. There’s off-road pods, a passenger shuttle and even a military jeep.

Tuhoe and NZ's first 'living building' In my work we collaborate with local Tangata Whenua frequently and I love it. I particularly like how Maori take a long-term view when it comes to decision making, rather than the 'boom and bust' mentality that sees so much destruction of our natural resources. While Maori may not have as much experience dealing with the Western system of education, finance and economy - and some mistakes are inevitable when learning something new - they certainly have a deep spiritual connection to the land which informs their approach.