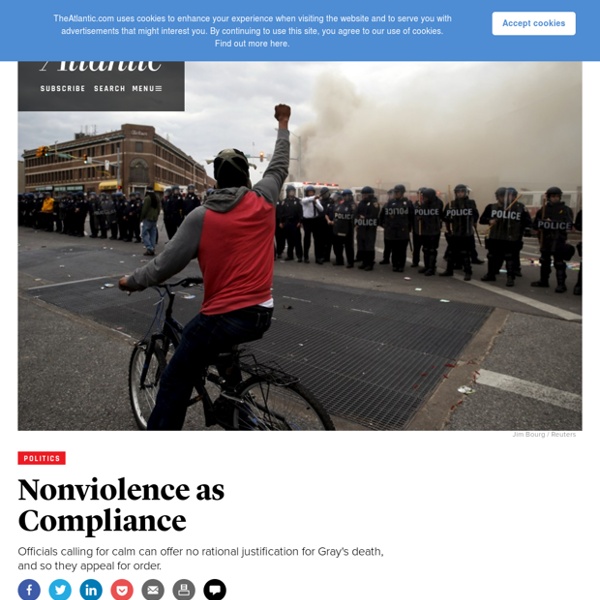 Rioting broke out on Monday in Baltimore—an angry response to the death of Freddie Gray, a death my native city seems powerless to explain. Gray did not die mysteriously in some back alley but in the custody of the city's publicly appointed guardians of order. And yet the mayor of that city and the commissioner of that city's police still have no idea what happened. I suspect this is not because the mayor and police commissioner are bad people, but because the state of Maryland prioritizes the protection of police officers charged with abuse over the citizens who fall under its purview. The citizens who live in West Baltimore, where the rioting began, intuitively understand this. I grew up across the street from Mondawmin Mall, where today's riots began. Over the past four years, more than 100 people have won court judgments or settlements related to allegations of brutality and civil rights violations. The people now calling for nonviolence are not prepared to answer these questions.

Poverty Denialism in a Culture of Cruelty: Bashing the Poor as Right-Wing Amusement In 1981, Texas Senator Phil Gramm lamented: “We're the only nation in the world where all our poor people are fat.” It was, to Gramm, clear evidence of how exaggerated the problem of economic hardship in America was, and how horrible the nation’s welfare state had become. Apparently, poor people aren’t really suffering or deserving of much sympathy until their ribcages are showing and their eye-sockets have all but swallowed their eyes. If the poor are fat, it’s not because so many of the cheapest and most readily available foods in poor communities are high in empty calories, sugar and non-nutritional ingredients---or because, in general, the U.S. food supply is overly-processed and unhealthy---but rather, it must be because poor people have it too good and are able to do a lot of fancy eating at public expense. America's culture of cruelty has long been fed by this kind of thinking: namely, the belief that the poor and unemployed really aren’t suffering that badly.

The Economics of Ferguson: Emerson Electric, Municipal Fines, Discriminatory Policing Take a walk along West Florissant Avenue, in Ferguson, Missouri. Head south of the burned-out Quik Trip and the famous McDonalds, south of the intersection with Chambers, south almost to the city limit, to the corner of Ferguson Avenue and West Florissant. There, last August, Emerson Electric announced third-quarter sales of $6.3 billion. Just over half a mile to the northeast, four days later, Officer Darren Wilson killed Michael Brown.

Hunter Ian Gibson Trampled To Death By Elephant He Was Tracking To Kill For Ivory A professional game hunter has been trampled to death by an elephant while leading a hunt with an American client in Zimbabwe. Ian Gibson, 55, was tracking animals in Chewore North in the lower Zambezi Valley of Zimbabwe, when the young bull elephant “began a full charge.” Paul Smith, the managing director of Chifuti Safaris which employed Gibson, told The Telegraph: "We don't yet know the full details of how 'Gibbo' as we called him, died, as the American client and the trackers are still too traumatised to give us full details." In a note on the website of Safari Classics, the company explained Gibson had been searching for a target for five hours when they stopped for a rest.

I Wonder if Heaven Got a Ghetto: Towards a Hip-Hop Eschatology Dedicated to Ailey. Keep Your Head Up, Sis. “Here on Earth, tell me what’s a black life worth?” –Tupac Shakur If I had a dollar for every time I heard someone from my community profess fear over the Book of Revelation and dread concerning the End Times, I am convinced that I would make Sallie Mae a happy woman and my student loans would be but a dream. Drawing a line in the sand: The movement victory at Ende Gelände opens up the road of disobedience for Paris The raucous rattle of a low flying helicopter shakes me awake. It must be the Police. The sun hasn’t risen yet and the tent’s sides still smell of morning dew. I doubt I was the only one in this field who didn’t sleep deeply last night.

Pinay testifies in UAE murder trial A Filipina was among six witnesses who testified in the murder case against an Emirati woman accused of fatally stabbing an American kindergarten teacher in a mall in the United Arab Emirates last December. The witnesses who testified Monday before the Federal Supreme Court also included an Egyptian-American doctor whose house was allegedly the target of a homemade bomb, Gulf News reported Tuesday. Emirati woman Ala’a Al Hashemi had been charged with stabbing Ibolya Ryan, a kindergarten teacher and mother of three, in the women’s bathroom of Reem Island Boutik Mall.

Reporting on Waco biker gang killings reveals disparities in news coverage Nine people have died after a shootout between rival motorcycle gangs in Waco on Sunday, when gunfire erupted in the parking lot of a Twin Peaks restaurant in the central Texas city. I use the terms “shootout” and “gunfire erupted” after reading numerous eyewitness reports, local news coverage and national stories about the “incident,” which has been described with a whole host of phrases already. None, however, are quite as familiar as another term that’s been used to describe similarly chaotic events in the news of late: “Riot.” Of course, the deadly shootout in Texas was exactly that: A shootout. The rival gangs were not engaged in a demonstration or protest and they were predominantly white, which means that — despite the fact that dozens of people engaged in acts of obscene violence — they did not “riot,” as far as much of the media is concerned. A riot is not simply a demonstration against police brutality.

Nepal Earthquake: Unatti Foundation Girls Cook for Survivors in Kathmandu By Erin Hill @erinhillny Amid the devastation and destruction in the Kathmandu valley of Nepal, a group of 20 young girls are handing out first aid kits and cooking rice and lentils for the thousands of displaced earthquake survivors in their community.

How Mindfulness Can Defeat Racial Bias This article first appeared on Greater Good, the online magazine of the Greater Good Science Center at UC Berkeley. It is the third in a series exploring the effects that unconscious racial biases have on the criminal justice system in the United States. When I was promoted to tenured full professor, the dean of my law school kindly had flowers sent to me at my home in Pacific Heights, an overpriced San Francisco neighborhood almost devoid of black residents. I opened the door to find a tall, young, African-American deliveryman who announced, “Delivery for Professor Magee.” I, a petite black woman, dressed for a simple Saturday spent in my own home, reached for the flowers saying, “I am Professor Magee.”

DN! The documentary "We Are Many" focuses on the February 15, 2003, global protests against the Iraq War. The film tells the story of that historic day and how its events have helped shape political movements around the world ever since. In this web exclusive, we continue our discussion with the film’s producer and director, Amir Amirani.

Cancer patient with a week to live flees Kansas for-profit Medicaid for life-saving surgery in Memphis A high school senior who was rejected by Kansas Gov. Sam Brownback’s (R) reformed for-profit state Medicaid system said that he was just days away from dying when he fled the state and found treatment at a hospital in Tennessee. Just last week, 18-year-old Levi Ross told KMBC that it had been a month since doctor’s discovered that he had a type of spinal cancer called epitheliod sarcoma and already the tumor had doubled in size. Ross’ doctors advised him to get treatment out of state, but after not responding for weeks, his insurance provider rejected the advice. After taking office, Gov. Brownback reformed the state’s Medicaid system by enrolling low-income and disabled patients in a for-profit system called KanCare.

National Day of Action For Black Women and Girls: #JusticeforRekia #SayHerName #BlackWomenMatter Recent events across the country have demonstrated that police murders, sexual assault and harassment continue with impunity. The fight for justice for families devastated by police who murder their loved ones is hard fought. As we struggle to fight for justice for loved ones like Freddie Gray, Tamir Rice, and Rashod McIntosh, we cannot forget, and must fight fiercely for Mya Hall, Aiyana Jones, and Rekia Boyd.