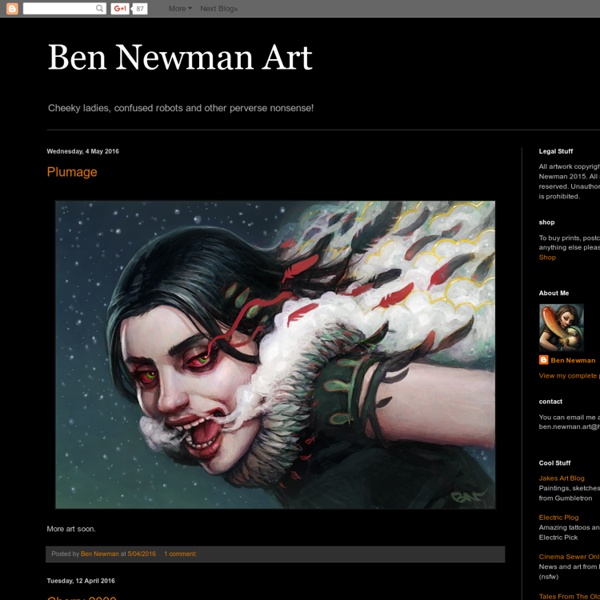 Hello again! Wow, the updates have really been few and far between this year. I've been drawing pretty much non-stop it feels like, but there doesn't seem to be much I can show! I did just finish a personal pic though, so here's that: Anyone who follows this blog regularly will probably have picked up on the fact that I'm a big film nerd; sometimes I feel like all the films I've watched, particularly when I was younger, have seeped into my mind and re-wired the way I see things. And as I'm a big perv, one of the biggest things to make an impression on me was all the sexy women in films!

Magnetica Fairies for Elfin series by SILWERHOF. For Blood Bowl: Team Manager collectible card game. © Fantasy Flight Games / Games Workshop For Warhammer: Invasion collectible card game. © Fantasy Flight Games / Games Workshop Cover artwork of Khooman’s “Tricky Colors” music album. Released by Darkapuggla Records. Artwork for Speed Kills game Produced for Holy Warp. Under Vhoorl’s Shadow » Cephalophilia Daikichi Amano (whose real name remains a mystery) is a very secretive paranormal investigator from Japan who uses the cover of this fake “artistic” website to publish the results of his investigations on the very popular cult of Cthulhu and Dagon in his homeland. In his latest update, he displays the horrors of human sacrifice, a widespread practice among Nipponese cultists, and gives us the rare proof that the Deep Ones aren’t just a myth invented by H. P.

Indistinguishable From Magic I started Dresden Codak nine years ago. Here’s a comparison of the very first strip I uploaded with the last panel of the most recent page. In 2005 I was a floundering 21-year-old college student with no direction and growing debt. I drew that snake comic in a statistics class I was failing, and on my way home I decided to scan it and maybe put together a website. I thought if I kept doing that, I could teach myself to draw, as a fun hobby. Emily Carroll My name is Emily Carroll, and I was born in June of 1983. I grew up in London (Ontario) but moved to Vancouver for work after graduating Sheridan College's Classical Animation program. I have since moved back to Ontario, and now live in Stratford with my wife, Kate Craig. We have a very large cat.