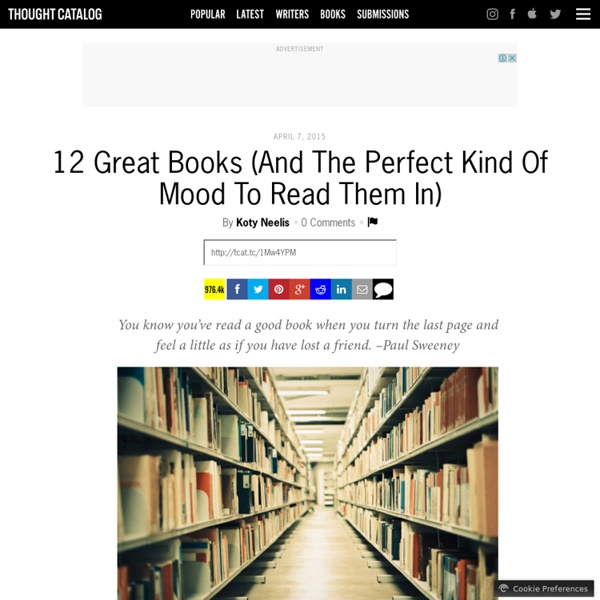 You know you’ve read a good book when you turn the last page and feel a little as if you have lost a friend. –Paul Sweeney What’s the last book that moved you? That made you laugh or cry or completely reconsider your thoughts on life or love? Those are always the books that stick with me. When I come across a book that truly impacted me I can often remember the intricate details of where I bought it or who gave it to me. 1. Haunted by the death of his brother and the suicide of his mother, Ben continues to slip deeper into the darkness of his own mind. 2. In The Lost Girls, readers go an adventure around the world with Jennifer, Holly, and Amanda as the three best friends decide to ditch their careers and lives back home for a crazy journey around four continents. 3. The title explains it all, although some might know the book as the PG-friendly title Being Flynn. 4. Marina Keegan was seen as a literary prodigy for her work as both a journalist and playwright at a young age. 5. 6. 7. 8.

11 Books To Read If You Love Haruki Murakami As the designated bookish one of my friend group, I give a lot of book recommendations. (This fact probably doesn't come as a huge surprise given my current occupation.) When someone asks me for ideas of what to read next, I always start by to get a sense of what they like — usually by asking, "Well, what do you like?" The most common answer by far is "kind of weird but cool stuff... like Haruki Murakami." My friends’ Murakami fixation is perhaps unsurprising given that he’s widely considered one of the world’s greatest living writers — for the past few years he’s topped the Vegas odds to win the Nobel Prize in Literature. The eccentric author is even more popular in Japan, where he recently finished up a run as the world’s most bizarre advice columnist, during which he confessed to not caring what happens after death as long as he gets to eat deep fried oysters and quoted Ray Charles to a broken-hearted young fellow.

The 100 Best Science Books of All Time Image by Biblioteca de la Facultad de Derecho (CC BY 2.0) The 100 Best Science Books of All Time list contains a mixture of classic and popular works, chosen for their accessibility and relevance. Most of the books selected are suitable for a well educated layman with only a few being for a more serious reader. The list covers the obvious subjects: biology, chemistry, and physics, as well as mathematics, the philosophy of science, and the history of science. Knitting together a financial plan for your life I’m an unapologetic knitter. And The Wealth Builder. I promise there’s a connection. With knitting, everything is built on two basic stitches.

How Art you today? Embroidery Art by Jose Murphy Mommy, Everyone in my class keeps writing about love, Falling in and out of love, Desired love and unwanted love, And the list goes on and on… They remind me of children who appear to find difficulty in comprehending different topics in this complex world. Well it’s not that they can’t comprehend any other aspect of this universe, But they don’t care as much about anything else. Why do they act like they understand love? The Most Popular Book Set in Each European Country — in One Surprising Map We know what the most popular movies, TV shows and books set in each American state are. But what about in other countries around the world? Using the same methodology as we did in the United States — using Goodreads' ratings for the most popular books set in each region — we determined the top picks for each of over 40 European countries (plus Vatican City). It won't shock you to learn a certain boy wizard came out on top in the United Kingdom. Yes, Harry Potter and the Deathly Hallows is the number one book in the U.K. All of the franchise's installments are beloved by Goodreads users, but the finale stands out.

Personal Finance: Deficits, debt and ceilings explained Last week, the U.S. government breached the federal debt ceiling, the statutory limit on the amount of borrowing allowed the U.S. Treasury to finance previously authorized financial commitments of the Congress and the President. Without legislative action to raise the cap, America will eventually be unable to pay all of its bills and will in effect default on some of its bonds. This would, of course, be catastrophic for families and the economy, and inevitably the ceiling will be increased.

Free Books! – 100 Legal Websites To Download Literature By: Just English The Classics Browse works by Mark Twain, Joseph Conrad and other famous authors here. Classic Bookshelf: This site has put classic novels online, from Charles Dickens to Charlotte Bronte.The Online Books Page: The University of Pennsylvania hosts this book search and database.Project Gutenberg: This famous site has over 27,000 free books online.Page by Page Books: Find books by Sir Arthur Conan Doyle and H.G. AN INTERVIEW WITH PETER DOHERTY – rubytuesdaywrites Bournemouth is drizzly and wet, but the atmosphere is buzzing. The Libertines are playing the BIC Centre later on and Pete and I are walking to his tour bus, his hand holding down one of his infamous hats onto his head. It’s hard to walk even a few meters next to such an influential poet, with fans coming from all directions, confessing their love for a flattered, humble Peter Doherty, who takes the time to chat to each of them.

A science fiction and fantasy reading list for teen creativity Creative writing is part of being a kid. Writing and reading goofy stories of lost kingdoms and Mars colonies helps the imagination grow strong. But a recent study uncovers an interesting, perhaps even dismaying trend: this generation of kids seems to prefer narrative realism when they write. In a study published earlier this year in Creativity Research Journal, researchers at the Harvard Graduate School of Education and the University of Washington asked the question, “How have the style, content and form of adolescents’ art-making and creative writing changed over the last 20 years?” To answer that, researcher Emily Weinstein and her co-authors, including Katie Davis, co-author of The App Generation (and a speaker at this week’s TEDSalon in Berlin), examined two distinct eras of teenage self-expression for the traditional hallmarks of creativity, such as originality, complexity and sophistication. The good news?