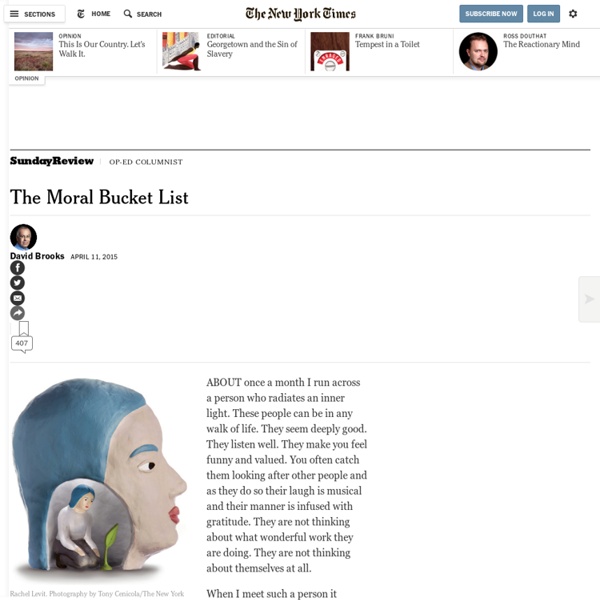 Photo ABOUT once a month I run across a person who radiates an inner light. These people can be in any walk of life. They seem deeply good. They listen well. They make you feel funny and valued. When I meet such a person it brightens my whole day. A few years ago I realized that I wanted to be a bit more like those people. It occurred to me that there were two sets of virtues, the résumé virtues and the eulogy virtues. We all know that the eulogy virtues are more important than the résumé ones. But if you live for external achievement, years pass and the deepest parts of you go unexplored and unstructured. So a few years ago I set out to discover how those deeply good people got that way. I came to the conclusion that wonderful people are made, not born — that the people I admired had achieved an unfakeable inner virtue, built slowly from specific moral and spiritual accomplishments. THE HUMILITY SHIFT We live in the culture of the Big Me. That kind of love decenters the self.

Adult Siblings May Hold The Secret To A Happy Life Katherine Streeter for NPR Somehow we're squeezing 16 people into our apartment for Thanksgiving this year, with relatives ranging in age from my 30-year-old nephew to my 90-year-old mother. I love them all, but in a way the one I know best is the middle-aged man across the table whose blue eyes look just like mine: my younger brother Paul. Paul and I kind of irritated each other when we were kids; I would take bites out of his precisely made sandwiches in just the spot I knew he didn't want me to, and he would hang around the living room telling jokes when he knew I wanted to be alone with the boy on the couch. But as adults, we've always had each other's backs, especially when it comes to dealing with our mother's health crises, which have become more frequent in the past few years. Paul is the first person I want to talk to when there's something that worries me about Mom; I know he'll be worried, too.

When Emotional Intelligence Goes Wrong “People skills” are almost always assumed to be a good thing. Search employment ads and you will find them listed as a qualification for a startling array of jobs, including Applebee’s host, weight-loss specialist, CEO, shoe salesperson, and (no joke) animal-care coordinator. The notion that people smarts might help you succeed got a boost a quarter century ago, when the phrase emotional intelligence, or EI, entered the mainstream. Coined in a 1990 study [1], the term was popularized by Daniel Goleman’s 1995 book [2].

Can you tell me more about green tea? A Tea Primer All true teas—as distinct from herbal and flower infusions, which afficiandos call tisanes, are made from the leaves of an evergreen tree with the botanical name of Camellia sinensis. Although reaching a height of 30 feet in the wild, on tea plantations (called gardens or estates), the plant is kept as a shrub, constantly pruned to a height of about 3 feet to encourage new growth and for convenient picking. Tea plants grow only in warm climates but can flourish at altitudes ranging from sea level to 7,000 feet. New Harvard Research Reveals A Fun Way To Be More Successful We all want to be more successful. But everything you read probably sounds like a lot of work. Isn’t there a scientifically proven method that’s a little more… fun? There is. Shawn Achor is the bestselling author of The Happiness Advantage and for years at Harvard he studied exactly that: happiness. He gave an extremely popular (and, in my opinion, the all-time funniest) TED talk.

Why tidying up could change your life I am stuffing a letter between two books when I realise my possessions are in charge of me. It’s a hoarder’s attempt at tidying: hiding stuff inside other stuff. My coffee table groans under books, digital devices, coffee cups, lint rollers, newspapers and one or both of my kittens, Ollie and Sebastian. It’s easier and more fun than you think to eliminate waste from your cooking Last summer, I went to work for an urban farm in Portland, Ore. I’d wake at six to harvest Easter egg radishes and bike home in the sherbet-pink sunset, too damn tired to care that I was wearing my helmet over my sun hat. Everything was beautiful and hard and I was always hungry.

merabheja You can search Google timer in Google for a timer with alarm Search This in Google for Direct Mp3 Links intitle:index.of?mp3 Your song name here Use your Chrome Browser as Notepad quickly. Just copy the text below to the address Bar. Donald Trump, Stephen Bannon and the Coming Crisis in American National Life During the 1990s, two amateur historians, Neil Howe and the late William Strauss, developed a new theory of American history in two books, Generations: the History of America’s Future (1991), and The Fourth Turning: An American Prophecy (1997). They identified an 80-year cycle in American history, punctuated by great crises that destroyed an old order and created a new one. Though their theory is not widely taught in colleges or discussed in the media, Strauss and Howe may well play a major role in Donald Trump's administration. Stephen Bannon, the former head of Breitbart News who has been appointed Trump’s chief strategist in the White House, is very familiar with Strauss and Howe’s theory of crisis, and has been thinking about how to use it to achieve particular goals for quite a while. I know this because Bannon interviewed both Neil Howe and myself in 2009 while he was making a documentary film about the ongoing financial crisis. What will they do?

A Self-Made Billionaire Uses This Easy Trick for Decisions The first chapter in Seymour Schulich’s book, Get Smarter: Life and Business Lessons, offers a decision tool that adds to the simple pro-and-con list that many of us have used to make decisions. Schulich, a self-made billionaire, is one of Canada’s richest and best-known businessmen. I learned this tool in a practical mathematics course more than fifty years ago and have used it for virtually every major decision of my adult life. Get Involved Dress for Success Houston seeks passionate and committed individuals to join its team of dedicated volunteers. Volunteers make it possible for Dress for Success Houston to serve thousands of women each year. From mentors to instructors, the personal touch added by a volunteer is often the connection a client needs to inspire them along the path to self-sufficiency. Last year, volunteers logged 10,974 hours, totaling an in-kind estimated value of $247,451!

businessinsider Almost five years ago today, my apartment lease expired, I shipped a few boxes to my mom’s house, packed a suitcase to (hopefully) last me a few months, and took off across the Atlantic. I had less than $1,000 in my bank account. The first stop was Paris, where, still reeling from breaking up with my girlfriend, selling all of my possessions, and maintaining an online business that was hardly making any money, I proceeded to sulk and gripe my way through the streets of La Ville-Lumiére totally not appreciating what was around me. Eventually, things got better though. And I moved on. Both from Paris and my own personal pity parade. 17 Books To Read If You Want To Become A Billionaire Success is magnetic. As a species, we’re constantly studying how it happens, why it happens, who has achieved it for themselves, and how we can obtain it. One thing is for sure: money is an echo of value.