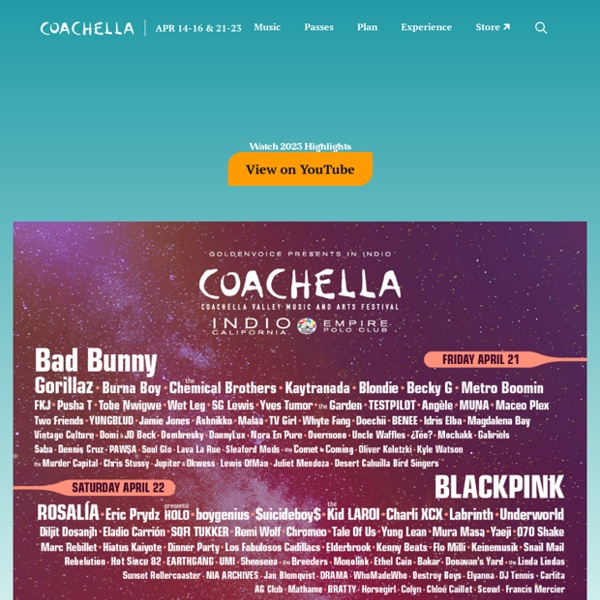 YouTube Will Be Livestreaming Coachella If you’re a music fan then you’ve definitely heard of the weekend concert extravaganza that is Coachella. Each year, it’s held in toasty Palm Springs, California and its host to the biggest acts in the music industry today. This year is no different, as just some of the acts performing are; The Black Keys, Florence + The Machine, and my personal fav Gotye. If you can’t make it to the event, have no fear, because YouTube will be livestreaming from the event starting tomorrow at 6:50pm ET, and will run throughout the entire weekend of musical performances. 15 Amazing Animated Short films We all love short animated films, but creating short film is very hard task. Putting whole story in 5 to 10 minutes is not easy. Can you imagine? Few films produced after working hard more than 6 years!

Hardly Strictly Bluegrass 2014 A number of people have approached us recently regarding the fact that this year’s Hardly Strictly Bluegrass Festival falls on the same weekend as Yom Kippur. When we first realized the conflict, last year, we considered other dates for the event. None were available. The festival takes over a large area of the park, so scheduling is no simple feat. Coachella Valley Music and Arts Festival Coordinates: The festival's origins trace back to a 1993 concert that Pearl Jam performed at the Empire Polo Club while boycotting venues controlled by Ticketmaster. The show validated the site's viability for hosting large events, leading to the inaugural Coachella Festival being held in October 1999 over two days. After a sojourn in 2000, the festival returned on an annual basis, beginning in April 2001 as a single-day event before reverting to the two-day format in 2002. The festival was expanded to a third day in 2007 and eventually a second weekend in 2012. Organizers began permitting spectators to camp on the grounds in 2003.

Radiohead, New York, NY 1997 Radiohead, New York, NY 1997 Sizes: 11x14 16x20 20x24 30X40 Color: Black and White Type: Silver Gelatin Edition of: Limited Edition (11x14 & 16x20 Open Edition) Signed Other Images You Might Like This Image Is Also Featured In David Byrne’s Meltdown David Byrne, the Oscar, Golden Globe, Obie and Drama Desk award-winning musician known for his eclectic collaborations, and as co-founder of seminal new wave band Talking Heads, curates the 22nd Meltdown. Byrne follows in the footsteps of previous directors that include Jarvis Cocker, Patti Smith, David Bowie, Yoko Ono, Ray Davies and Ornette Coleman. 'I am beyond excited at how much of this has fallen into place. At Coachella, a rebellious spirit The booking of Pulp, with its ‘Common People' anti-1% screed, typifies Coachella '12. One of the great, universal rock anthems of the last two decades — Pulp's “Common People” — bypassed the U.S. when it exploded out of England in 1995. But if and when a reunited Pulp plays the song at this year's Coachella Music and Arts Festival in Indio, Calif., its artful and catchy screed against the 1% couldn't be more timely. At a moment when jobless kids are cracking open piggy banks and digging deep for a Coachella ticket to see 120-odd bands over one weekend at the Indio festival, Pulp seems the most relevant among veteran acts that also include Refused, Mazzy Star, At the Drive-In, Company Flow, Madness and Squeeze.

How-To: Easily Remove the Vocals from Most Songs 2015 Shortcut: When I wrote this article Audacity didn’t have an automatic center-panned vocal canceling effect… but now it does, so rather than do the stereo-separate / invert-one-track / play-both-as-mono trick (and that’s pretty much all there is to it), you should be able to find the Vocal Remover option in the Effects menu – but it’s more fun / interesting and can give better results if you do it yourself! =D I found this trick the other day whilst stumbling the Interwebs and thought I’d do a quick-write up w/ pictures to make it as easy as possible… For this exercise we’re going to be using a piece of free audio software called Audacity, which you can get for Linux, Windows and Mac. The Cambridge Folk Festival Jump to navigation Cambridge live Sun shines on sell-out success at 51st Cambridge Folk Festival More info