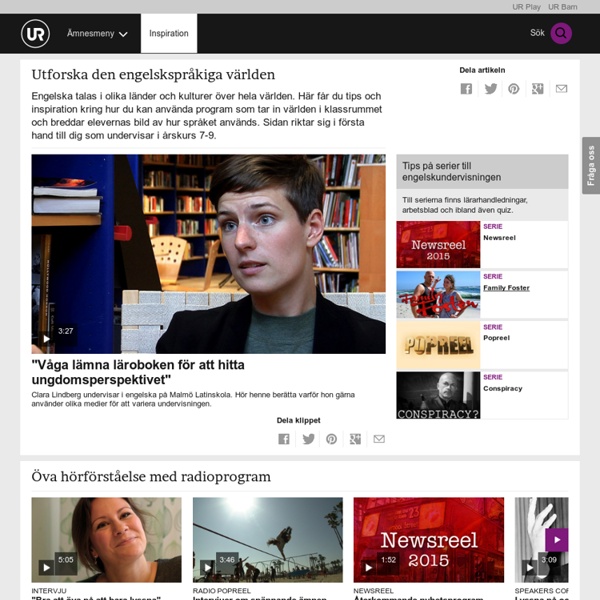 Jamie Oliver Hamburger Chef Jamie Oliver Proves McDonald’s Burgers “Unfit for Human Consumption” Hamburger chef Jamie Oliver has won his long-fought battle against one of the largest fast food chains in the world – McDonalds. After Oliver showed how McDonald’s hamburgers are made, the franchise finally announced that it will change its recipe, and yet there was barely a peep about this in the mainstream, corporate media. Oliver repeatedly explained to the public, over several years – in documentaries, television shows and interviews – that the fatty parts of beef are “washed” in ammonium hydroxide and used in the filling of the burger. Before this process, according to the presenter, the food is deemed unfit for human consumption.

Roar – Katy Perry – ESL lesson plan The song “Roar” perfectly fits the topic of gender roles/stereotypes, feminism. Besides, it’s a great source of idioms, set expressions and phrasal verbs. That’s how I would use it in class. 1. Tell the students that we’re going to study 7 new expressions (slides 2-4). Having introduced them, I’d ask some questions to use them in speech. Planning Page ⋆ WebEnglish.se WebEnglish.se hopes to make every teacher’s life easier by presenting term plan templates to use together with your students and/or colleagues to plan an enjoyable school term. WebEnglish.se suggests your plan be filled with themes, books, films, and whatever else the class might come up with. If you are familiar with Google Forms, you can COPY this documentGoogle Form yr 3-6Google Form yr 7-9Google Form B1 and edit the questionnaire for your students by deleting all the themes that do not apply to your class. To continue using paper and pen, just follow these steps: 1. Choose your class level and PRINT OUT the list of WebEnglish.se themes:

Seven Things I Learned in Seven Years This EFL lesson is designed around a short film by Maria Popova and her reflections on what she has learned since she set up her wonderful website Brain Pickings titled Seven Things I Have Learned in Seven Years of Reading, Writing and Living. Students speculate on a photo, read a short article, watch a short film, talk about the points made in the film, and read the transcript of the film. Language level: Intermediate (B1) – Upper Intermediate (B2) Learner type: Teens and adults Time: 90 minutes Activity: Speculating on an image, reading an article, watching a short film, speaking and reading a transcript IfItWereMyHome.com Canada A land of vast distances and rich natural resources, Canada became a self-governing dominion in 1867 while retaining ties to the British crown. Economically and technologically the nation has developed in parallel with the US, its neighbor to the south across an unfortified border. Canada faces the political challenges of meeting public demands for quality improvements in health care and education services, as well as responding to the particular concerns of predominantly francophone Quebec. Canada also aims to develop its diverse energy resources while maintaining its commitment to the environment.

Resources Secondary Box – ELT – All your favourite English Teaching resources in one place – Cambridge University Press 'Programaciones Didácticas' for 'Next Generation' | Cambridge University Press Spain Added by: Secondary Box Here you will find 'Programaciones Didácticas' for 'Next Generation', available in Spanish and Catalan. IDEA International Dialects of English Archive For all you dialecticians, actors, linguists, and just plain language enthusiasts, let’s see if you can identify the home country (or, for the United States, Canada, and China, the state/province) of the following subjects from their accent or dialect. Take a listen, make your best guess, and then click the link under each audio clip to be taken to the sample you just heard. On that sample page, you will be able to read the biography of the subject, hear the person’s unscripted speech, and read the transcription. 1.Audio Player

Videos About 9/11 Next week marks the thirteenth anniversary of the terrorist attacks of September 11, 2001. C-SPAN Classroom has organized a collection of videos about 9/11. The videos are intended for classroom use. The collection includes news footage from September 11, 2001 along with reflections on 9/11 from President Bush, Vice-President Cheney, New York City Mayor Rudy Giuliani, and President Obama. More resources for teaching about 9/11.Understanding 9/11: A Television Archive is hosted on The Internet Archive. It is an assembled collection of more than 3,000 hours of news footage from September 11, 2001 and the six days immediately following. Downloadable lesson materials CrowdWish Level: B2/Upper Intermediate and up Skills: Speaking, reading and listening Language: idioms (dream come true, like magic, step in the right direction etc) and wish (including wish + would) ELT Resourceful – Crowdwish The lesson is about a new online service, CrowdWish, which invites people to post their wishes on their website.

The EFL SMARTblog: Merry Christmas Mr Bean Teacher's note; The activities in the worksheet at the bottom of this post are based on the full episode available on DVD or on cannot be embedded here). This post contains some exercises based on the embeddable youtube clips. The answers are in the worksheet. English speaking countries Magic Vocabulary Magic Vocabulary is an automatic generator of worksheets and games to teach vocabulary. Just enter your list of words and this website will create bingo, dominoes, crossword, memory games, etc. High Quality ESL Lesson Plans - Free Samples - $26 Membership Be a better teacher! Hundreds of PDF lesson plans.

How to Use Our Blog This School Year - The New York Times Photo Happy academic year 2014-15! Here’s what we’ve got on our blog and how you can use it, whether you’re a teacher, a student (of any age) or a parent. Where did English come from? - Claire Bowern There are two other TED-Ed lessons related to this topic: How languages evolve and How did English evolve? (a lesson that fills in some of the details that we omit here due to the fact that the focus of this lesson was further in the past). There is still a great deal of debate about Indo-European, most importantly about the location of the homeland. To read more about this debate, there are classic books by Mallory and Renfrew, as well more recent works by Anthony.

English-speaking countries Have you ever wondered why you have to learn English at school? Did you know that the world speaks English? Do you know how many countries in the world have English as an official language?