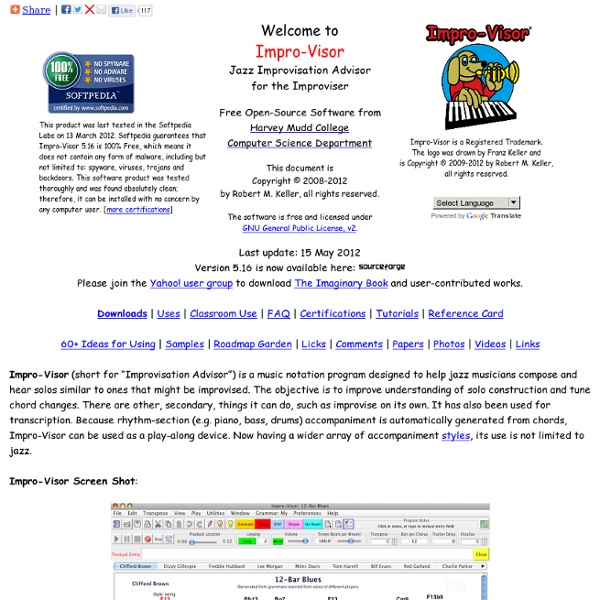 Last update: 15 May 2012 Version 5.16 is now available here: Please join the Yahoo! user group to download The Imaginary Book and user-contributed works. Downloads | Uses | Classroom Use | FAQ | Certifications | Tutorials | Reference Card 60+ Ideas for Using | Samples | Roadmap Garden | Licks | Comments | Papers | Photos | Videos | Links Impro-Visor (short for “Improvisation Advisor”) is a music notation program designed to help jazz musicians compose and hear solos similar to ones that might be improvised. Impro-Visor Screen Shot: Partial List of Features: Lead sheets and solos can be constructed through either point-and-click or using a plain text editor (one is provided, but any editor can be used). Optional automatic note coloration shows whether notes are consonant or dissonant with chords and scales. Chords may also be entered quickly through a "roadmap" editor, which also analyzes chord changes for implied keys and idiomatic progressions ("bricks"). MacOSX (with Java 1.6 installed) Linux Related:  Jazz

20 Albums To Begin A Journey into Jazz This is for you if you want to a journey into listening to jazz more seriously, or if a friend asks you what jazz records they should listen to in order to appreciate it more fully. It's no good people starting to listen to jazz on the margins; it's like giving a ten year old, Tolstoy's 'War & Peace' to read, chances are they will not make it past the first page. There are some jazz fans that can be awfully snooty about the music they love, they almost try to turn it into a club that refuses to let in new members. So we decided to put together a list of the 20 albums to start your collection with. Every one is a brilliant record and no discerning jazz fan would turn their nose up at any one of them. It includes albums like Miles Davis's, Kind of Blue, Bill Evan's, Waltz For Debby and John Coltrane's, Blue Train; all three consistently make the list of the most important jazz albums ever.

ArduinoFFT - Open Music Labs Wiki - Vimperator Arduino FFT Library Notes: For a faster frequency analysis library, check out the FHT! The serial output of the examples is in binary, not ASCII. About the Arduino FFT Library The Arduino FFT library is a fast implementation of a standard FFT algorithm which operates on only real data. Speed characteristics * Note: the lin8 values are approximate, as they vary a small amount due to SCALE factor. Memory characteristics S = SRAM, F = Flash How to Use the FFT Library Files Libraries: Arduino1.05 (fixed PROGMEM for new avr-gcc (thanks forum user kirill9617), added serial example) Arduino FFT library (new) Libraries: Arduino1.0 or Arduino-0022 (should work with both) Arduino FFT library (old) Installing Libraries The above files need to be placed in the libraries folder inside of your Arduino sketch directory. If you are not certain where the libraries folder is located on your computer, try the following: Mac Open up your Arduino sketchbook folder. Implementation Details References

Is jazz entering a new golden age? | Music If you think you’ve seen more attention devoted to jazz in the past year or so, you’re not wrong. Thanks in part to a spotlight aimed by Kendrick Lamar – whose album To Pimp a Butterfly prominently featured contemporary names like pianist Robert Glasper and saxophonist Kamasi Washington – there’s been an overall renaissance in press coverage for a genre that has, in recent decades, often seemed ignored by the popular media. Jazz’s resurgent profile, however, isn’t merely due to one rapper’s significant influence. David Bowie’s selection of jazz-world veterans for his Blackstar band reminded listeners that jazz elites can be worthy players in the realm of adventurous pop. At the same time, it’s become more common to see contemporary pop stars displaying their jazz bona fides with pride: witness Lady Gaga pairing up with Tony Bennett for an album, or the wealth of producers, DJs and MCs (such as Tyler, the Creator) eager to name-drop their favorite vintage jazz records.

Mixtape Alpha | Open Music Labs - Vimperator Making a mixtape was never this much fun! NOTE: We completely sold out of our first run, and are taking pre-orders for a second run. This will most likely be our last run, so check out our Crowd Supply campaign to get your Mixtape Alpha. Mixtape Alpha is the smallest synthesizer we could make without a prescription. It has a stylophone style input for continuous note generation, and 6 buttons for discrete notes. If you want to dig into the guts of this 8-bit synth, check out the wiki page. Mixtape Alpha was done in collaboration with Jie Qi from the High-Low Tech group at the MIT Media Lab. The 2018 NPR Music Jazz Critics Poll Below are the results of NPR Music's 6th Annual Jazz Critics Poll (my 13th annual, going back to its beginnings in the Village Voice). Wayne Shorter's Emanon was voted Album of the Year, and Cecile McLorin Salvant's The Window Best Vocal. Shorter and Salvant have won these categories previously (thrice in Salvant's case), and Both Directions at Once: The Lost Album marks the second victory in Rara Avis (a catch-all term for reissues, vault discoveries, and the like) for John Coltrane. David Virelles's Igbó Alákorin (The Singer's Grove): Vol. We're trying something different this year. Including my own choices and analysis, and the individual ballots of all 139 participants, there should be enough here to keep you reading — and listening — well into the new year. New Albums 1. 2. The Pulitzer winner here grew a 15-piece ensemble from his Zooid group. 3. 4. Makaya McCraven injects new energy (and post-production artistry) into the jazz vernacular. 5. 6. 7. 8. 9. 10. The Rest Of The Top 50

Robot Elephant Records - Vimperator POST BOP, a jazz music subgenre Part I Post Bop is a modern jazz style that continues the distinguishing characteristics that separate jazz from the world of pop and rock; swing rhythm and extended harmonies (9th chords 11ths, altered chords, etc). Post Bop grew out of the Hard Bop genre during the early to mid 60s as musicians such as Bill Evans, Wayne Shorter, and Herbie Hancock began to introduce more extended harmonies, abstract structures and looser rhythms in their playing and compositions. When Hancock and Shorter joined Miles Davis’ quintet in the mid-60s, that group became the perfect vehicle for extending the boundaries of what could happen in a Post Bop format. The Miles Davis Quintet albums, "Nefertiti" and "Sorcer", continue to be pinnacles of Post Bop composition and performance. Some styles of free modal jazz, such as Coltrane's "A Love Supreme", are also part of the Post Bop sound. Part 2 - Post Bop in the New Century Live album · 2018 · Post Bop Great X-mas present for pianist fans. ALAN PASQUASoliloquy

Interference | A Journal of Audio Culture - Vimperator Milt Jackson Milton "Bags" Jackson (January 1, 1923 – October 9, 1999) was an American jazz vibraphonist, usually thought of as a bebop player, although he performed in several jazz idioms. He is especially remembered for his cool swinging solos as a member of the Modern Jazz Quartet and his penchant for collaborating with several hard bop and post-bop players. A very expressive player, Jackson differentiated himself from other vibraphonists in his attention to variations on harmonics and rhythm. He was particularly fond of the twelve-bar blues at slow tempos. He preferred to set the vibraphone's oscillator to a low 3.3 revolutions per second (as opposed to Lionel Hampton's speed of 10 revolutions per second) for a more subtle tremolo. Biography[edit] Jackson was born on January 1, 1923 in Detroit, Michigan, the son of Manley Jackson and Lillie Beaty Jackson. While attending Miller High School, he played drums in addition to timpani and violin and also sang in the choir. Discography[edit]