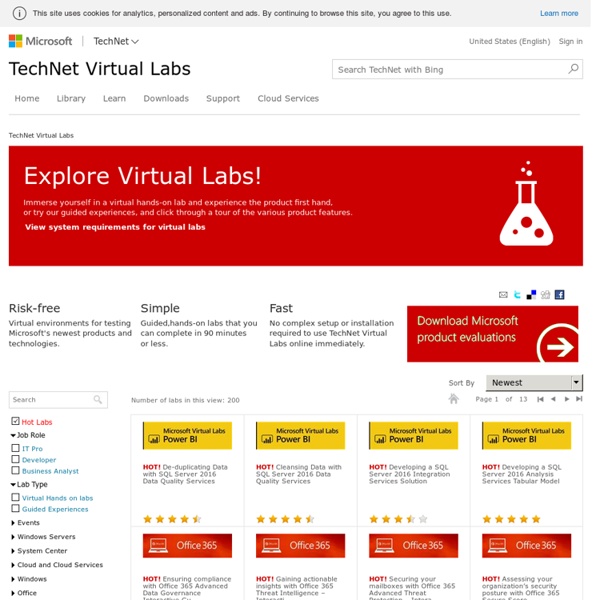 HYPER-V,SYSTEM CENTER AND AZURE: Monitoring: Integration Between SCVMM 2012 R2 and SCOM 2012 R2 In our previous post, we have talked about integration between SCVMM 2012 R2 and SCCM 2012 R2 to enable for fabric update. This round we are going to integrate with SCOM 2012 R2. By integration Virtual Machine Manager with Operation Manager, you enable Operation Manager to monitor the virtual environment. This includes all components of Virtual Machine Manager such as VMM Server, SQL database that it uses and any virtual machines, services and clouds that it manages. Performance and Resource Optimization (PRO) In addition, by integrating VMM and Operations you can take advantages of Performance and Resource Optimization (PRO) features. Through PRO tip, SCOM notifies the operator and recommend an action such as migrating host to a different Hyper-V host. Check on the result of your test PRO Tip either in the Jobs workspace in the VMM console or in the Operations console in Operations Manager Virtual Machine Manager Views There are several views and task become available in Operation Consoles

AZENCE- App Development Boulder Automatic creation of user folders for home, roaming profile and redirected folders. - Ask the Directory Services Team Hi Rob here again. Periodically we’re asked "what is the best way to auto-create home, roaming profile, and folder redirection folders instead of Administrators creating and configuring the NTFS permissions manually?" The techniques in this post requires you to use the environment variable %USERNAME% in the user’s home folder attribute when you create the users account. We will also make use of the “$” symbol in the share name; which makes the share hidden from anyone who attempts to list the shares on the file server via computer browsing. Alright let’s get started. Home directory: Home folders are created automatically when the user’s account is created and an administrator has enabled the use of home folders. Create the folder and enable sharing As you can see we create the share name and added a dollar sign ($) to the end. Next, we’ll configure the share permissions. Administrators: Full Control System: Full Control Authenticated Users: Full Control 1. Configuring NTFS Permissions 1. a.

Install SQL Server 2012 Step By Step | Random Tech Tips This tutorial will step you through installing SQL Server 2012. I’m using a Windows 2012 server that will eventually be used to run Configuration Manager 2012, but before I can install that I’ll need my Database infrastructure up and running first. Typically on a SQL Server, for the sake of performance I would create the following partitions on separate LUNs: However in my lab, I’m using just 1 (virtual) disk with 1 partition. Understand the hardware and software requirements of supporting SQL Server 2012 from technet: Prior to installing SQL Server 2012, install .NET Framework 3.5 from Roles and Features. Insert DVD/Mount ISO and click Setup.exe You will be prompted with SQL Server Installation Center – click Installation from the left hand side, then click New SQL Server stand-alone installation from the right hand side In Setup Role, I select All Features With Defaults: Uncheck the following: Leave Filestream as default.

Windows Server 2003 : Configuring Advanced DNS Server Properties - Tuning Advanced Server Options (part 1) - - Windows Server - tutorial.programming4.us When initialized for service, DNS servers running on Windows Server 2003 apply installation settings taken either from the boot information file, the Registry, or the Active Directory database. You can modify these settings on the Advanced tab of the server properties dialog box in the DNS console, as shown in Figure 1. Figure 1. DNS server properties Advanced tab The server installation settings include six server options, which are either on or off, and three other server features with various selections for configuration. In most situations, these installation defaults are acceptable and do not require modification. Tip You can restore these default settings at any time using the Advanced tab by clicking Reset To Default. To restore DNS server default preferences, complete the following steps: The following sections describe the available installation options in more detail. Disable Recursion The Disable Recursion server option is disabled by default. Warning BIND Secondaries Note

Virtualization and some coffee: Live cloning in SCVMM 2012 R2 Live cloning in SCVMM 2012 R2 One of the new nice features in Windows Server 2012 R2 – Hyper-V, is that the hypervisor supports live cloning (live export/import) of virtual machines running on this platform. The VM can either be online, stopped or in saved state. Please note: although this is supported, you should be careful with this feature, as it is seldom smart to power on two machines with the exact same identity on the same network. When is this useful? Imagine you have a virtual machine accessed by a bunch of users. By having the ability to live clone this VM, you can do this without affecting the running virtual machine, and get an identical copy containing the issue, resolve it, and apply these changes to the live VM. To summarize: this little – but important feature very important in a service provider cloud, as well as for the ISV’s and the enterprises where there is development and testing. 1) Find a VM in the VMM console that is running on a Hyper-V 2012 R2 host. Happy testing!