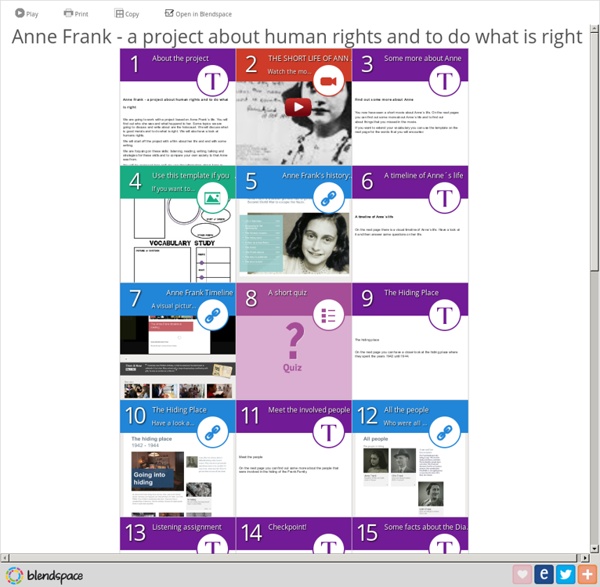 I'll begin from the moment I got you, the moment I saw you lying on the table among my other birthday presents. (I went along when you were bought, but that doesn't count.) On Friday, June 12, I was awake at six o'clock, which isn't surprising, since it was my birthday. But I'm not allowed to get up at that hour, so I had to control my curiosity until quarter to seven. When I couldn't wait any longer, I went to the dining room, where Moortje (the cat) welcomed me by rubbing against my legs. A little after seven I went to Daddy and Mama and then to the living room to open my presents, and you were the first thing I saw, maybe one of my nicest presents. Then Hanneli came to pick me up, and we went to school. They gave me a beautiful book, Dutch Sasas and Lesends, but they gave me Volume II by mistake, so I exchanged two other books for Volume I. This morning I lay in the bathtub thinking how wonderful it would be if I had a dog. Source:

Anne Frank: Facts and Information Here are some facts about Anne Frank, the famous young Jewish diarist who was tragically killed during the Holocaust. Anne was born on 12th June 1929 in Frankfurt, Germany.Her father was called Otto and her mother was called Edith. She had an older sister called Margot.Anne’s family were ‘liberal Jews’. They didn’t live in a Jewish-only community and they didn’t strictly follow all of the Jewish customs.Following the elections in Germany of 1933, which were won by the Nazi Party (led by Adolf Hitler), the Franks moved to Amsterdam in order to escape the antisemitic (anti-Jewish) feelings that were being promoted by the Nazis.In Amsterdam, Anne started to develop a love of reading and writing.In May 1940, the Netherlands was invaded by Germany. Laws were made to discriminate against the Jewish population. Anne and her sister had to leave the school they were attending and transfer to a Jewish-only school.

The Mass Murder of Jews in the Second World War Under Adolf Hitler the National Socialist German Worker’s Party became very powerful in Germany from 1933 to 1945. The Nazis, as they were called, wanted to get rid of people who they thought were not as good as they were. They especially hated Jews and thought they were evil . At the beginning they made life hard for the Jews in Germany and all over Europe. Later on, they decided to kill them.

World War Two (WW2) for Kids Remembrance Day For almost six years from 1939 to 1945 Britain fought the toughest war it had ever experienced. World War II was total war - every person, every business, every service was involved. Britain did not fight alone, the war also involved many countries. Anne Frank Anne Frank was a teen writer who went into hiding during the Holocaust, journaling her experiences in the renowned work The Diary of Anne Frank. Synopsis Born on June 12, 1929, in Frankfurt, Germany, Anne Frank lived in Amsterdam with her family during World War II. Fleeing Nazi persecution of Jews, the family went into hiding for two years; during this time, Frank wrote about her experiences and wishes. She was 15 when the family was found and sent to the camps, where she died.

Anne Frank Who Was Anne Frank? During the two years and one month Anne Frank spent hiding in a Secret Annex in Amsterdam during World War II, she kept a diary. Anne Frank's diary, which was published by her father after the war and has been read by millions of people around the world, chronicles both the tensions and difficulties of living in such a confined space for that long a duration as well as Anne's struggles with becoming a teenager.

WWII History: World War II for Kids World War II was fought between the Axis Powers (Germany, Italy, Japan) and the Allied Powers (Britain, United States, Soviet Union, France). Most of the countries in the world were involved in some way. It was the deadliest war in all of human history with around 70 million people killed. 5 Things You Don't Know About Anne Frank and Her Diary 1. Pseudonyms When Anne Frank readied her diary for eventual publication, she created pseudonyms for the people she wrote about in her diary. Although you are familiar with the pseudonyms of Albert Dussel (the real life Freidrich Pfeffer) and Petronella van Daan (the real life Auguste van Pels) because these pseudonyms appear in most published versions of the diary, do you know what pseudonym Anne chose for herself? Even though Anne had chosen pseudonyms for everyone hiding in the Annexe, when it came time to publish the diary after the war, Otto Frank decided to keep the pseudonyms for the other four people in the Annexe but to use the real names of his own family. This is why we know Anne Frank by her real name rather than as Anne Aulis (her original choice of a pseudonym) or as Anne Robin (the name Anne later chose for herself).

The Freedom Writers Diary Lesson Plans for Teachers Teaching The Freedom Writers Diary The Freedom Writers Diary lesson plan contains a variety of teaching materials that cater to all learning styles. Inside you'll find 30 Daily Lessons, 20 Fun Activities, 180 Multiple Choice Questions, 60 Short Essay Questions, 20 Essay Questions, Quizzes/Homework Assignments, Tests, and more. Story of Stuff The Story of Stuff, originally released in December 2007, is a 20-minute, fast-paced, fact-filled look at the underside of our production and consumption patterns. The Story of Stuff exposes the connections between a huge number of environmental and social issues, and calls us together to create a more sustainable and just world. It’ll teach you something, it’ll make you laugh, and it just may change the way you look at all the Stuff in your life forever. Download the Fact Sheet Credits The Story of Stuff was written by Annie Leonard, Louis Fox, and Jonah Sachs, directed by Louis Fox and produced by Free Range Studios.

The Holocaust: How Do The Choices Made During The Holocaust Affect The Choices We Make Today?: Process Your first task in this WebQuest is to visit the United States Holocaust Museum's website. Please be advised that while some of the stories are disturbing, this is a historical event that impacts us today. If you feel as if you are not adequately prepared for this, please contact the teacher. I encourage you to visit the entire site, see what activities are available, and visit all of the resources that are available via their website. Your activitiy for this class will be focused on the section "Remember: Survivors and Victims."

Anne Frank’s Diary Published Otto Frank, the only member of his family to survive the Holocaust, returned home from the Auschwitz concentration camp after it was liberated by Russian troops in early January 1945. He soon found the diary of his younger daughter, Anne. Written in Dutch while her family was in hiding from the Gestapo, Anne Frank’s diary tells the story of a young woman’s internal struggle to understand and cope with Nazi occupation and anti-Semitism. Otto recalled in the 1960s how he felt reading the diary for the first time: “For me, it was a revelation. Dr. Martin Luther King Jr. Articles & Videos Skip to main content <div id="nojs-warning">WARNING: Javascript must be enabled for the correct page display</div> Sign InRegister ReadWorks.org The Solution to Reading Comprehension

The Holocaust: Process The main task/assignment for the Holocaust WebQuest is to write a letter to a relative as if you were a participant(a soldier or a victim) in the Holocaust. In order to complete this task/assignment, our class will complete the following steps: 1) As a class, the first thing you will do together for this assignment will be to gain a foundation of background information on the Holocaust. This will be done by: 1) watching a video called, "One Survivor Remembers" detailing one Polish family's situation during the Holocaust.