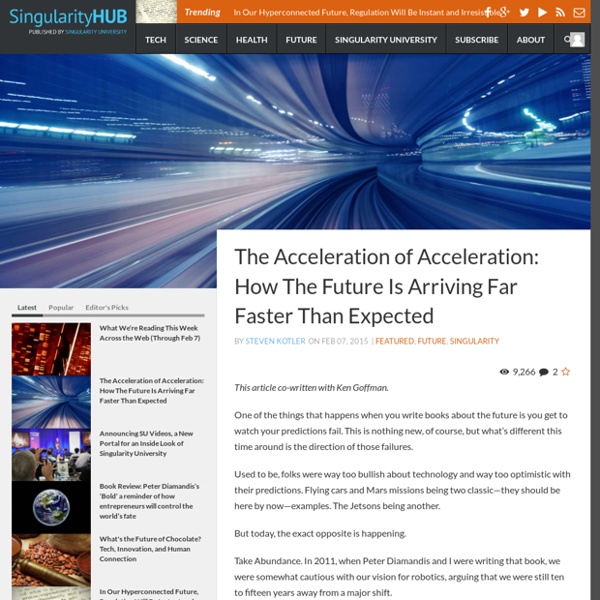 The Acceleration of Acceleration: How The Future Is Arriving Far Faster Than Expected This article co-written with Ken Goffman. One of the things that happens when you write books about the future is you get to watch your predictions fail. This is nothing new, of course, but what’s different this time around is the direction of those failures. Used to be, folks were way too bullish about technology and way too optimistic with their predictions. Flying cars and Mars missions being two classic—they should be here by now—examples. But today, the exact opposite is happening. Take Abundance. And we were wrong. Just three years later, Google went on a buying spree, purchasing eight different robotics companies in less than six months, Amazon decided it was time to get into the drone delivery (aka flying robots) business, and Rethink Robotics released Baxter (a story explored in my new release Bold), the first user-friendly industrial robot to hit the market. Rethink Robotics Baxter robot. Related:  Exponential Change - Technological Singularity

Introducing the Singularity Q: So what is this “Technological Singularity” I keep hearing about? In the broadest sense it refers to “an event or phase brought about by technology that will radically change human civilization, and perhaps even human nature itself before the middle of the 21st century.”1 Think of it as the “tipping point” where the accelerating pace of machines outrun all human capabilities and result in a smarter-than-human intelligence. Q: Seriously? Yes. Q: Sounds like something out of a sci-fi novel… Well the term “technological singularity” was coined by Vernor Vinge, a professor of Mathematics who originally used the term in one of his sci-fi novels. In it, he writes: “Within thirty years, we will have the technological means to create superhuman intelligence. Learn More His use of the term “singularity” stemmed from a mathematical concept where there exists a point at which output is not defined and expected rules break down. Vinge himself thought the Singularity could occur in four ways: 1. “1. 2.

Singularity University’s GSP Class of 2014 Blasts Off to the Future Last week, Singularity University hosted the Closing Ceremony of its 2014 Graduate Studies Program, the pinnacle of an annual program that brought 80 entrepreneurs and visionaries from 35 countries to Silicon Valley for an intense 10-week crash course on exponential technologies and global grand challenges. Now in its sixth year, the event was a celebration of the participants’ commitment to solving the world’s greatest challenges, culminating in 21 team projects sure to produce viable companies that will positively impact a billion people worldwide. I had the opportunity to attend this sold-out event at the Computer History Museum in Mountain View, which showcased the collective talents of the participants along with the dedication of all involved in making this year’s GSP a success. He added, “That’s what makes this institution special. Based on these criteria, the five teams selected to present during the ceremony included:

Evolution of evolvability Evolution of Evolvability This paper shows how evolution tunes the content and frequency of genetic variation to enhance its evolvability. Genetic evolution is not random or entirely blind. Genetic systems are like nervous systems and brains—they have been structured and organised by evolution to enhance their ability to discover effective adaptations. (For a more general approach to the evolution of evolvability, see Chapters 8 to 12 inclusive of the on-line book Evolution's Arrow. It examines in detail how evolution itself has evolved. (a final version of this paper was published in the Journal of Social and Evolutionary Systems (1997) 20: 53-73.) The cognitive ability of a genetic system is its capacity to discover and perpetuate beneficial adaptations. Cognitive ability will be influenced by genetic arrangements which affect the range and types of variant genotypes which are produced and trialed within the genetic system. Are genetic arrangements which have these features feasible?

The future of technology will "pale" the previous 20 years Infinity Point Will Arrive by 2035 Latest Eray Ozkural December 23, 2013 During writing a paper for the 100 Year Starship Symposium, I wished to convince the starship designers that they should acknowledge the dynamics of high-technology economy, which may be crucial for interstellar missions. Thus motivated, I have made a new calculation regarding infinity point, also known as the singularity. According to this most recent revision of the theory of infinity point, it turns out that we should expect Infinity Point by 2035 in the worst case. Here is how and why. Infinity Point was the original name for the hypothetical event when almost boundless amount of intelligence would be available in Solomonoff's original research in 1985 (1), who is also the founder of mathematical Artificial Intelligence (AI) field. The original theory arrives at the Infinity Point conclusion by making a few simple mathematical assumptions, and solving a system of equations. and the total number of synapses is less than . Onwards to the future! References: