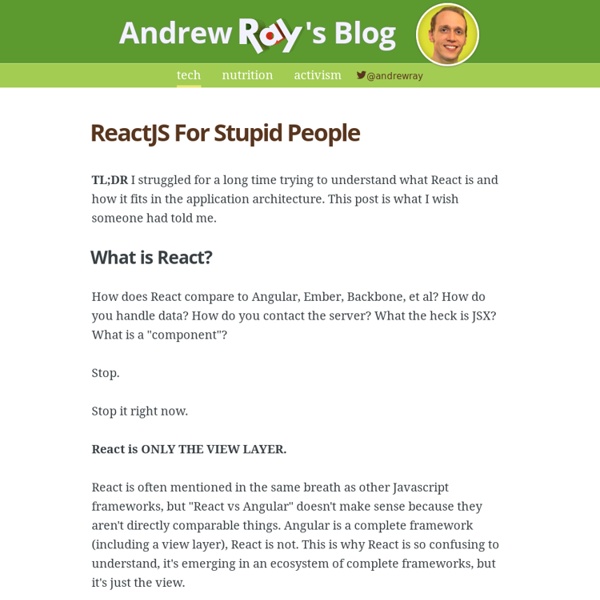 TL;DR I struggled for a long time trying to understand what React is and how it fits in the application architecture. This post is what I wish someone had told me. What is React? How does React compare to Angular, Ember, Backbone, et al? How do you handle data? How do you contact the server? Stop. Stop it right now. React is ONLY THE VIEW LAYER. React is often mentioned in the same breath as other Javascript frameworks, but "React vs Angular" doesn't make sense because they aren't directly comparable things. React gives you a template language and some function hooks to essentially render HTML. You absolutely cannot build a fully functional dynamic application with React alone. The Good After working with React for a while, I've seen three very important benefits surface. 1. This may be the most important benefit, even though it is not different from Angular templates. Say you have to update your site's header with the user's name upon log in. Here's how you might do it in React: 2. 3. The Bad

Introduction Front-end development moves forward fast. A good indication of this is the pace at which new technologies appear to the scene. React is one of these recent newcomers. Even though the technology itself is simple, there's a lot going on around it. Introducing JSX - React Edit on GitHub Consider this variable declaration: const element = <h1>Hello, world!</h1>; This funny tag syntax is neither a string nor HTML.

Best Practices for Component State in React.js When writing React applications, it’s important to know when and when not to use state in components. In this post, I will review what I consider to be best practices for working with state. TL;DR: If a component does not own a datum, then that datum should not influence it’s state. Learning React.js: Getting Started and Concepts # Introduction Today we are going to kick off the first installment in a new series of tutorials, Learning React, that will focus on becoming proficient and effective with Facebook’s React library. Before we start building anything meaningful, its important that we cover some base concepts first, so lets get this party started. Update 4/29/2016: This article has been updated for React v15 What is React? React is a UI library developed at Facebook to facilitate the creation of interactive, stateful & reusable UI components.

Introduction · react-indepth At DevelopmentArc® we have a love affair with UI application development. We truly enjoy the exploration of technologies and frameworks. This process helps us better understand the end-goals and complexity of the application stack. The Road to learn React - RWieruch I love to teach, even though I am no expert. I learn every day and I have the fortune to have great mentors. After all not everyone has the opportunity to learn from mentors and peers. React.js Essentials - DZone - Refcardz References Helps to access the DOM nodes. Two-way data bindings with mixins The Hitchhiker's Guide to Modern JavaScript Tooling - React Kung Fu A lot of developers coming to JavaScript world attracted by React.js are confused with the tooling used to produce modern JavaScript code. Webpack, Babel, ESLint, Mocha, Karma, Grunt… what should I use and which tool is doing what? JavaScript newcomers are often people coming from communities like Ruby and Java where opinionated, full-stack solutions exist. Frameworks like Ruby on Rails provide a lot of features out of the box - in fact the problem you may have with JavaScript is caused by that. You do not think about the building tools for your code - your template language processors, asset pipeline, cache middleware and a lot other things are pre-configured for you and they work transparently.

Intro to React (Example) In this tutorial we're going to go through the basics of React. We will render a list of posts that we return via a ajax query. This will not be fully functional as I'm also a beginner to react. I'll cover what I know. First off, why react? React exists to update apps and websites in response to constant changes in data. A JavaScript library for building user interfaces - React A Simple Component React components implement a render() method that takes input data and returns what to display. This example uses an XML-like syntax called JSX. Input data that is passed into the component can be accessed by render() via this.props. JSX is optional and not required to use React. Try clicking on "Compiled JS" to see the raw JavaScript code produced by the JSX compiler.

Static Site Generation with React and Webpack I’ve been dabbling with React for a few months now and using it in several small open source projects to better understand the technology. React’s focus on reusablility, along with the ability to install and require components via npm, provides an elegant way to rapidly build application UI in an efficient and consistent way. It’s also a great way to handle server-side rendering and provides high cohesion between markup and display logic. Note: many of the packages referenced in this post have released major version, breaking updates since this was written. Some of the examples may not work with the latest npm modules, especially the react-router package, which has a much different API now. Why