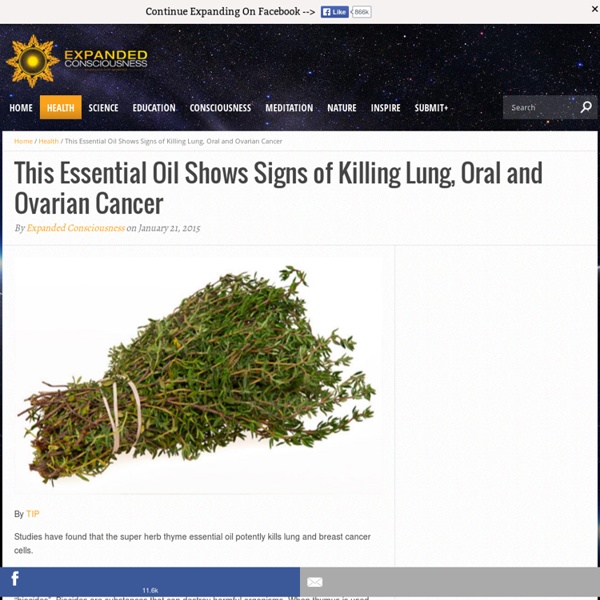 By TIP Studies have found that the super herb thyme essential oil potently kills lung and breast cancer cells. The essential oil of common thyme (Thymus vulgaris) which usually known as “oil of thyme” contains 20-54% thymol. Thymol belongs to a naturally occurring class of compounds known as “biocides”. Thyme is a native to the Mediterranean, and was originally given the name “thyme” in Greece, they still use it in their cooking mixed with olive oil. Check out the video below and learn – Thyme Essential oil – distillation self produced Fresh thyme also makes a great addition to a healthy diet focused on organic fruits, vegetables and whole foods and can be used as a herb in cooking or simply prepared as a tea. References: (i) ncbi.nlm.nih.gov (ii) Effects of Thymus serpyllum Extract on Cell Proliferation, Apoptosis and Epigenetic Events in Human Breast Cancer Cells This post was originally featured on Top Info Post. Related:  Spices and Herbs as potential cures

Frankincense Superior to Chemotherapy in Killing Late-Stage Ovarian Like the Magi, carrying myrrh, frankincense, and gold, researchers from the University of Leicester have, for the first time, demonstrated the potential of treating ovarian cancer using the Christmas gift frankincense. The origins of frankincense can be traced to the Arabian Peninsula. According to Herodotus (5th century BC): Arabia is the only country which produces frankincense, myrrh, cassia, and cinnamon.. the trees bearing the frankincense are guarded by winged serpents of small size and various colors. (See this GreenMedInfo Summary) Frankincense, along with gold and myrrh, is one of the most famous Christmas presents in history, and is a fragrant plant resin extracted from the Boswellia sacra tree found across Africa and Arabia. More specifically, they have been able to demonstrate the ability of AKBA to combat cancer cells in late-stage ovarian cancer. Lead researcher Kamla Al-Salmani, PhD student from the University's Department of Cancer Studies and Molecular Medicine explained:

Anticancer Foods Please Share This Page: Top 34 Anti-Cancer Foods image to repin / shareBackground pic © Liddy Hansdottir - Fotolia.com Introduction (Note - this list originally appeared as part of the Anticancer Herbs page on this site - but due to the significant size of the page, we decided to divide them into two pages, one for "herbs" and one for "foods". Please see the introduction to that page for an explanation of the goal of these pages and help with the technical terms used. Please note - the purpose of this page is not to attempt to persuade you that "these foods will cure you of cancer". The purpose of this page is simply to present as much information as possible on the subject, in order that the person interested in the possibility of anti-cancer foods may be assisted in "doing their homework". List of claimed Anticancer Foods / active components Avocado Anthocyanins (Berries, currants, eggplant, orange, red grapes, red wine, purple corn & more) Coffee Cruciferous vegetables (i.e. Fish Flax Papaya

VIDEO: Amazing Cure Of Terminal Breast Cancer With Turkey Tail Fungus VIDEO: Amazing Cure Of Terminal Breast Cancer With Turkey Tail Fungus Paul Stamets is one of the world’s foremost experts on fungi and his astonishing work is so groundbreaking that he has even been called “a man who could actually save the world”. In addition to discovering diverse applications for fungi including the cleanup of radioactive contamination, he is also involved in two NIH-funded clinical studies on cancer and HIV treatments using mushrooms as adjunct therapies. In 2009, Paul’s 84 year old mother was given less than 3 months to live after her breast cancer metastasized (spread) throughout her body. Her doctor said it was one of the most severe cases she had ever seen in 20 years of practice. They weren’t exactly hopeful, but turkey tail fungus had shown some remarkable results in lab testing and researchers had noted a “dose-dependent increase in production of natural killer cells” (anticancer cells in the body). What Is Turkey Tail Fungus? In tincture form Further Studies:

Moringa Oleifera aqueous leaf extract down-regulates nuclear factor... Rosemary Kills > 90% of Cervical Cancer & Liver Cancer Cells In Vitro! 4K+ Rosemary Anti-Cancer image to repin / share Photo – © al62 – Fotolia.com The good news for Rosemary as a wonderful medicinal herb just keeps on coming! It was only a few weeks ago that we reported that Rosemary had been found to have a remarkable positive effect on memory. Now we have discovered that scientists have found further evidence of Rosemary‘s potential as an anti-cancer agent. Synthetic drugs are often considered to be the only option for cancer chemotherapy. Several studies in the past few years have indicated that rosemary may play a valuable role in cancer risk reduction. A brand new study (Jan 27th 2014) in the International Journal of Oncology has reported that Carnosol, an active constituent of rosemary, significantly reduced the viability of human colon cancer (HCT116) cells in a concentration-dependent and time-dependent manner. [3] Essential oils can often contain over 100 different molecular components. References: [1]

A Handful of Walnuts Each Day Can Help Keep Breast Cancer Away 25th February 2015 By Carolanne Wright Contributing Writer for Wake Up World A powerful defense against breast cancer might just be found in the daily habit of eating walnuts. Lead researcher Elaine Hardman, Ph.D., compared the effects of a standard diet and a diet containing walnuts throughout the lifespan of mice. The mice who consumed the diet which included walnuts experienced breast cancer rates that were less than half compared of those in the standard diet group. “These reductions are particularly important when you consider that the mice were genetically programmed to develop cancer at a high rate,” Hardman observed. Rich in disease-fighting nutrients, walnuts provide a healthy dose of omega-3 fatty acids along with vitamin E. “Using genetic analysis, the Marshall study found that the walnut-containing diet changed the activity of multiple genes that are relevant to breast cancer in both mice and humans. “Food is important medicine in our diet. Article sources: About the author:

'Miracle Grass' Encourages Longevity While Dispelling Disease By Carolanne Wright Contributing Writer for Wake Up World More potent than ginseng, jiaogulan is a powerful antidote to aging, cancer, cardiovascular disease, stress and fatigue. It even helps to maintain proper weight. First recorded in the Materia Medica for the Salvation of Starvation during the Ming Dynasty in China, jiaogulan (Gynostemma pentaphyllum) was the go-to herb for a variety of ailments. The secret to longevity and absence of disease The Chinese mountainous region of Guizhou is famous for its sheer number of centenarians. Jiaogulan is also recognized as a general health elixir that supports endurance and strength while alleviating fatigue. Formidable anti-cancer tonic Jiaogulan works on several levels to prevent and heal cancer. Incomparable adaptogen Adaptogens by their very nature have no side effects and only restore balance where needed. Through its adaptogenic properties, jiaogulan supports equilibrium within the body. Article Sources Previous Artilce By Carolanne

Recipe To Make Cannabis Oil For Chemo Alternative “Once the public becomes aware of the fact that properly made hemp medicine can cure or control practically any medical condition, who is going to stand up against the use of hemp?” Rick Simpson has dedicated his life to helping suffering patients (with all types of diseases and disabilities) with the use of natural hemp oil. Rick Simpson’s Hemp Oil Proves Effective In Curing Cancer Rick Simpson is a medical marijuana activist who has been providing people with information about the healing powers of Hemp Oil medications for nearly a decade now. Rick cured himself of a metastatic skin cancer back in 2003, and has since then devoted his life to spreading the truth of hemp oil. He has met an absurd amount of opposition and lack of support from Canadian authorities, as well as pharmaceutical companies, government agencies for health, and UN offices. “Run From The Cure” Official Video Documentary “I want people to know how to heal themselves.” Rick Simpson’s Hash Oil Recipe 1. 2. 3. 4. 5. 6. 7.

Amazing Herb Kills 98% Of Cancer Cells In Just 16 Hours In Lab Test Amazing Herb Kills 98% Of Cancer Cells In Just 16 Hours In Lab Test Please Join our email list to receive all our latest and best tutorials daily – free! Photo – Wikipedia – lic. under CC 4.0 Artemisia (aka. After discovering a write-up on the highly selective and rapid anticancer properties of Artemisia on Healthy Food House, I dug in and did some research. Artemisinin, a compound derived from Wormwood, has been the subject of much research – and it has shown much promise as an anti-malaria agent. Artemisia annua was first noted as a possible anticancer herb in 2001, when two researchers at the University of Washington learned that wormwood showed highly selective activity against breast cancer cells. In lay terms, what this means is that artemisinin killed the breast cancer cells without harming the healthy cells. It is also thought that hyperbaric oxygen therapy could further enhance the anticancer effects of artemisin. [6] I Can't Help Showing This Off: >>> Watch His Short Video <<<

Essential Oils Pure 100% Therapeutic Grade : Budwig Center Everything has an electrical frequency or vibration, including food, our bodies, and even disease that can be measured in Megahertz (MHz). Frequency is defined as a measurable rate of electrical flow that is constant between any two points. Interestingly enough, the frequency of essential oils are actually some of the highest frequencies known to man. They create an environment in which disease, bacteria, virus, fungus, etc., cannot live and are several times greater than the frequencies of herbs and foods. Therefore no anti-cancer program would be complete without the introduction of the appropriate essential oils. A healthy body, from head to foot, typically has a frequency ranging from 62 to 78 MHz, while disease begins at 58Hz. Another man drank the coffee and his frequency dropped from 66 MHz to 52 MHz. In another case: A man’s frequency dropped from 65 MHz to 48 MHz when he simply held a cigarette. Other studies show that: Negative thoughts lower our frequency on average 12 MHz.