How to Use Recycled Tech Devices as Learning Tools 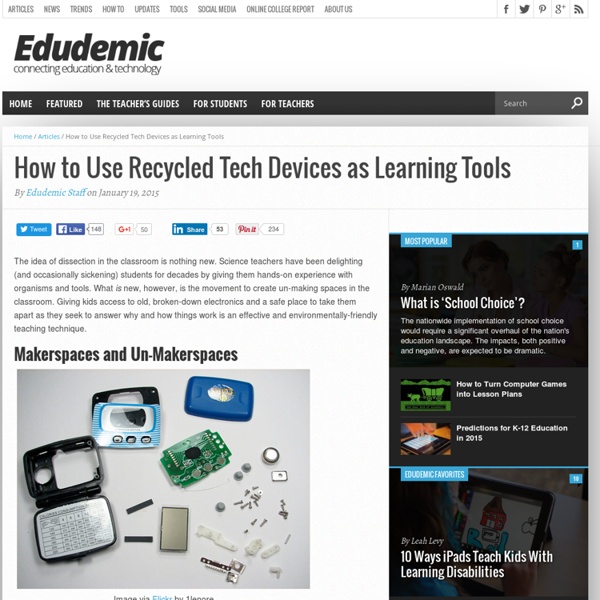 The idea of dissection in the classroom is nothing new. Science teachers have been delighting (and occasionally sickening) students for decades by giving them hands-on experience with organisms and tools. What is new, however, is the movement to create un-making spaces in the classroom. Giving kids access to old, broken-down electronics and a safe place to take them apart as they seek to answer why and how things work is an effective and environmentally-friendly teaching technique. Makerspaces and Un-Makerspaces In a recent (excellent) Edutopia article, fifth-grade teacher Scott Bedley describes how he created an un-makerspace. However, Bedley also spoke with the makers at the Bay Area Maker Faire and realized that many of them took things apart when they were kids, as he did. How to Create an Un-Makerspace Bedley shares the seven basic steps that he took to create his un-makerspace. How to Find Unwanted Electronics Incorporating Un-Making Into Your Lesson Plans Wrapping It Up

Useful Tools Students Can Use to Create 3D Models (Work on Chromebooks too) January 21, 2015 Below are two useful tools you can use with your students to create 3D models on the cloud. You do not need to download any software, the tools are web-based and, best of all, work on Chromebooks so those of you teaching with Chromebooks will find them handy. 1- Design Something This is an application for 3D modeling which works on both Chrome and Firefox. Design Something allows students to easily build 3D model using pre-defined shapes. They can also use tools such as extrude and sweep to create shapes from 2D sketching. Other features supported by the app include: ability to design parts first then assemble them; design offline, and export of finished design to STL for 3D printing.

EDUCATIONAL MAKERSPACES Editor’s Note: This article, reprinted from the June 2014 issue of Teacher Librarian: The Journal for School Library Professionals, is a thoughtful and insightful examination of the philosophy and pedagogical underpinnings of the maker movement. The authors’ analysis and argument are strong, and the benefits they tout are inspiring. The authors will follow up with two more articles on the maker movement which will be published in the next two issues of Teacher Librarian. 2013 Technology Outlook for STEM+ Education - The New Media Consortium The Technology Outlook for STEM+ Education 2013-2018: An NMC Horizon Project Sector Analysis was released as a collaborative effort between the New Media Consortium (NMC), the Centro Superior para la Enseñanza Virtual (CSEV), Departamento de Ingeniería Eléctrica, Electrónica y de Control at the Universidad Nacional de Educación a Distancia (UNED), and the Institute of Electrical and Electronics Engineers Education Society (IEEE). This report will inform education leaders about significant developments in technologies supporting STEM+ (science, technology, engineering, and mathematics) education. Twelve emerging technologies are identified across three adoption horizons over the next one to five years, as well as key trends and challenges expected to continue over the same period, giving educators, administrators, and policymakers a valuable guide for strategic technology planning across STEM+ education.

Makey Makey Invention Kit for Everyone Make + Key = Makey Makey Would you enjoy playing a game of PacMan with carrots or tinkering with a set of play dough piano keys? If the answer is “yes,” then Makey Makey might be just the toy for you! I’ve been following Makey Makey by JoyLabz for a while and we finally got the chance to play with our very own set. What’s Up with STEM for 2015? A MiddleWeb Blog My fingers are crossed for 2015 as the best STEM year ever! I’ve been looking around to see what directions STEM programs seem to be taking this year. At first glance, it appears that deciding what a STEM program should look like is an ongoing conundrum for the K-12 education world. I decided to scrutinize what’s being described as “STEM” these days using resources from the National Academies and the American Society for Engineering Education, as well as my own work with the Engaging Youth through Engineering project.

Case Study: Elementary School Library Makerspace Last week we were super impressed and inspired by the librarians we met at the American Library Association’s Midwinter Conference #alamw2015. To keep the good vibes flowing, this week we have a case study from teacher-librarian Collette J. who is using littleBits as a learning tool in her elementary makerspace. Read more about her experiences below: Download Case Study PDF Submit Your Own littleBits Case Study Submission 3D Printers Add a New Dimension to Classrooms When Ron Smith first saw a 3D printer in action, he knew the device belonged in his Engineering and Metal Fabrication program at Nestucca Junior/Senior High School in Cloverdale, Ore. The technology could guide students all the way through the manufacturing process — from concept to completion — and reward them with an object they could hold in their hands. But it wasn’t until Smith had an Afinia 3D printer in his classroom that he realized its value as an educational tool. Computer-assisted design (CAD) software by itself is great, he says. But being able to bring those designs to life with a 3D printer adds a whole new dimension to the student experience.

Teleprompter Apps For The iPad: iPad/iPhone Apps AppGuide Those looking to invest in an expensive teleprompter may not have to. The iPad has tons of apps available that will turn it into a teleprompter. The price ranges from only a few bucks to around 10 bucks for the more fully featured apps. We compare the best ones out there in this AppGuide. 27 Ways to Inspire Students to Innovate (Infographic) via MindShift Educator Mia MacMeekin made this infographic about ways to inspire students to think more deeply about how innovation applies to them. It’s a helpful way to begin a conversation about what it means to innovate, a word that sometimes seems to belong in the adult domain of business and is estranged from how students think about living their lives. This article appeared on Mindshift on November 29 2013 and was written by Katrina Schwartz. The infographic was produced by Mia MacMeekin. Like what you see?

Kids Archives - Bits of Everything I originally shared this idea over on Or So She Says a while ago. Just in case you missed it, I wanted to share it here as well. Do you need an affordable, creative, and fun idea that will keep the kids busy for hours? I have the perfect thing for you! Today we are making a DIY fort kit using PVC pipe. I’ve done a few PVC projects and they are always lots of fun, but my favorite part is that PVC is cheap!