Women's Abortion Rights Trump Fetuses' Rights. Fathers of girls, has having a girl changed how you view of females, or given you a different understanding of women? : AskReddit. Clara Barton. Clarissa Harlowe "Clara" Barton (December 25, 1821 – April 12, 1912) was a pioneer nurse who founded the American Red Cross. 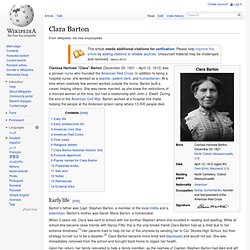 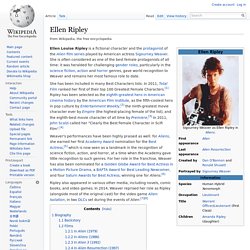 In 2014, Weaver reprised her role as Ripley (alongside most of the original cast) for the video game Alien: Isolation, in two DLCs set during the events of Alien.[7][8] Biography[edit] Backstory[edit] Smart, beautiful and deadly: 19-year-old Russian sniper Roza Shanina had 54 confirmed kills during WWII : pics. I swear she's an Imgurian. The Side Effect Of Birth Control No One Ever Talks About.

This Recently Married Man Just Realized Marriage Is Not For Him. This is Seth Adam Smith and his wife, Kim. 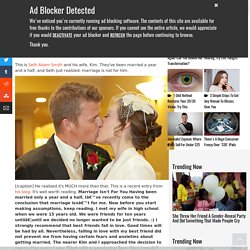 Mindy Kaling. Early life and education[edit] Kaling was born Vera Mindy Chokalingam[3] on June 24, 1979 in Cambridge, Massachusetts, to a Tamil father and a Bengali mother, both Hindus from India.[4] Her father, Avu, is an architect,[5] and her mother, Dr. 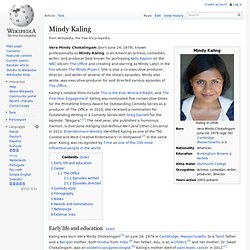 Swati Chokalingam, was an obstetrician/gynecologist.[6] Kaling's mother died of pancreatic cancer in 2012.[7] Kaling has been referred to as Mindy since her mother was pregnant with her while her parents were living in Nigeria. They were already planning to move to the United States and wanted a "cute American name" for their daughter, and liked the name Mindy from the TV show Mork & Mindy. 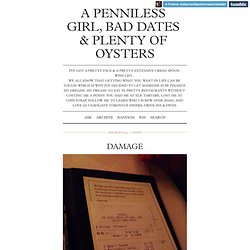 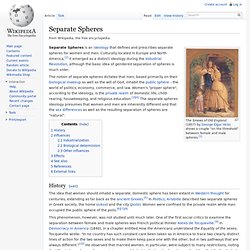 Culturally located in Europe and North America,[2] it emerged as a distinct ideology during the Industrial Revolution, although the basic idea of gendered separation of spheres is much older. The notion of separate spheres dictates that men, based primarily on their biological makeup as well as the will of God, inhabit the public sphere – the world of politics, economy, commerce, and law.

Women's "proper sphere", according to the ideology, is the private realm of domestic life, child-rearing, housekeeping, and religious education.[3][4] The separate spheres ideology presumes that women and men are inherently different and that the sex differences as well as the resulting separation of spheres are "natural". 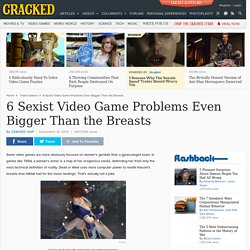 In games like TERA, a woman's armor is a map of her erogenous zones, defending her from only the most technical definition of nudity. Dead or Alive uses more computer power to model Kasumi's breasts than NASA had for the moon landings. That's actually not a joke. Today’s Google Doodle Honors Nobel Prize Winner Jane Addams. Today’s Google Doodle is a colorful tribute to Jane Addams (Sept. 6, 1860 – May 21, 1935), the famed social worker who, in 1931, became the first woman to receive the Nobel Peace Prize. 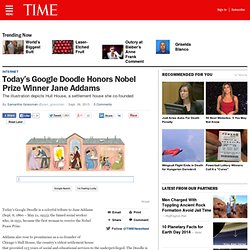 Addams also rose to prominence as a co-founder of Chicago’s Hull House, the country’s oldest settlement house that provided 123 years of social and educational services to the underprivileged. The Doodle is a simple illustration of the red brick structure, situated on the West Side of Chicago. No animation, no music, nothing fancy: just a straightforward tribute to Addams and to the settlement house, which she co-founded with fellow social reformer and activist Ellen Gates Starr. 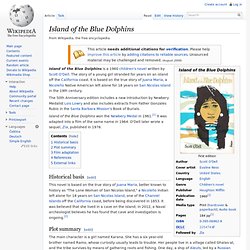 Plot summary[edit] The main character is a girl named Karana. Lysol Ad #3. Sanctuary. We Do Abortions Here. Intimate Photos Capture Glimpse Into One Woman’s Life as a Prostitute. TRIGGER WARNING: This post contains nudity and photographs about prostitution. 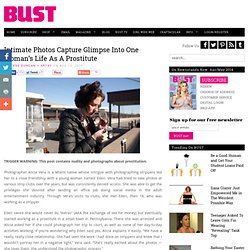 Photographer Alicia Vera is a Miami native whose intrigue with photographing strippers led her to a close friendship with a young woman named Eden. Vera had tried to take photos at various strip clubs over the years, but was consistently denied access. She was able to get the privileges she desired after landing an office job doing social media in the adult entertainment industry.

Feminists on Twitter say #SolidarityIsForWhiteWomen. A Message To Women From A Man: You Are Not “Crazy” To Bleed Or Not To Bleed: Is That The Question? Photo: ParentingPatch Young women are increasingly using birth control pills to prevent menstruation as well as pregnancy In the mid-2000s birth control pills such as Seasonale and Lybrel began to appear. Unlike other pills, these brands reduced periods to only a few times a year, or eliminated them entirely. However, it is possible to prevent bleeding with almost any birth control pill by skipping the placebo pills at the end of the pack. OB/GYNs have used this trick for decades to treat patients with endometriosis, dysmenorrhea, and other menstruation-related disorders that benefit from an uninterrupted dose of hormones. Understanding menstrual suppression Because ovulation typically does not occur when women take birth control pills, the bleeding experienced by women taking traditional pills cannot be considered true menstruation.

'Woman in red' sprayed with tear gas becomes symbol of Turkey protests. ISTANBUL - In her red cotton summer dress, necklace and white bag slung over her shoulder she might have been floating across the lawn at a garden party; but before her crouches a masked policeman firing teargas spray that sends her long hair billowing upwards. Endlessly shared on social media and replicated as a cartoon on posters and stickers, the image of the "woman in red" has become the leitmotif for female protesters during days of violent anti-government demonstrations in Istanbul. "That photo encapsulates the essence of this protest," said math student Esra at Besiktas, near the Bosphorus strait and one of the centres of this week's protests.

"The violence of the police against peaceful protesters, people just trying to protect themselves and what they value. " In one graphic copy plastered on walls the woman appears much bigger than the policeman. Why Finnish babies sleep in cardboard boxes. Image copyright Milla Kontkanen For 75 years, Finland's expectant mothers have been given a box by the state.

It's like a starter kit of clothes, sheets and toys that can even be used as a bed. And some say it helped Finland achieve one of the world's lowest infant mortality rates. It's a tradition that dates back to the 1930s and it's designed to give all children in Finland, no matter what background they're from, an equal start in life. The Most Important Defense Of Women’s Rights You Will Read Today. The Republican Party has waged a vicious war against women for many years now, and it hasn’t slowed one bit. Controlled by their Christian Right puppet masters, GOP lawmakers across the country have introduced bill after bill in an effort to end a woman’s right to choose. 2013 has been yet another year in which women have lost rights because Christian fundamentalist men are using their own interpretation of the Bible to excuse their sexism.

Women-Drivers.com: Write & read car dealer, dealership, reviews and locate the top automobile dealer rating. High school fashions, 1969. Fashion, Vintage. Listening While Feminist: In Defense of “Baby It’s Cold Outside” in Feminism on Persephone Magazine. Editor’s note: Please enjoy this featured post from our archives. SlutWalk. SlutWalk is a transnational movement[1] of protest marches which began on April 3, 2011,[2] in Toronto, Ontario, with subsequent rallies occurring globally.[3] Participants protest against explaining or excusing rape by referring to any aspect of a woman's appearance,[4] and call for an end to rape culture.[5] The rallies began after Constable Michael Sanguinetti, a Toronto Police officer, suggested that "women should avoid dressing like sluts"[6][7] as a precaution against unwanted sexual attention.

The protest takes the form of a march, mainly by young women, where some dress as "sluts" in revealing attire. Boobquake. Tallulah Bankhead. Tallulah Brockman Bankhead (January 31, 1902 – December 12, 1968) was an American actress of the stage and screen,[1] talk-show host, and bonne vivante.[2] Bankhead was also known for her deep voice, flamboyant personality, and support of liberal causes, which broke with the tendency of Southern Democrats at the time to support a more conservative agenda. She was inducted into the Alabama Women's Hall of Fame in 1981.[3] Early life and family[edit] 229965124692115948_GSPBAQFi_c.jpg (553×827) Marjane Satrapi. Marjane Satrapi (Persian: مرجان ساتراپی) (born 22 November 1969) is an Iranian-born French[1][2] graphic novelist, illustrator, film director, and children's book author.