The Nostalgia Machine. MusicBrainz - The Open Music Encyclopedia. Music-Map - The tourist map of music. Every Noise at Once. Musica. Music General. MuSiC DaTaBaSe. Sounds of the Universe. Songza Daily - Share-worthy music moments. Liveplasma. The History of Electronic Music in 476 Tracks (1937-2001)

Photo of Karlheinz Stockhausen by Kathinka Pasveer via Wikimedia Commons. 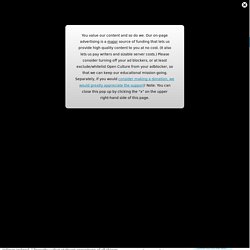 Ambient Music Guide.com. Covered / Sampled. Minimalistica - download free electronic music. Experimental Composers. Music. The Nostalgia Machine. A Beginner's Guide to No Wave. More often than not, the official history of New York’s late ‘70s scene ends in the scuzzy confines of CBGBs, and the birth of American punk (or New Wave, to use its proper nomenclature). 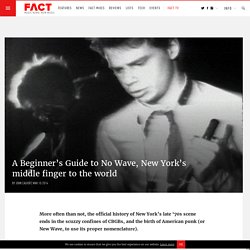 Equally reductive is the historian’s conception of the American punk bands themselves, who often are assessed only in relation to the role they would play in the genesis of British punk, with CBGB acts like Richard Hell & The Voidoids, The Ramones and Television reduced to mere footnotes in the greater story of the Pistols and co. But as attentions turned to London, back in Manhattan and just at the point the history books end, something very exciting was happening. They called it No Wave. New York City In many ways, the story of No Wave is also the story of New York. With the city falling apart at the seams, low rents together exacerbated soaring crime rates and an overstretched police force combined to create the perfect conditions for the artist, and in particular the transgressive artist. Multimedia Sixties 1968 Music - A retro nostalgia look at music. 1968 Song of the year With an album behind them and an almost hit with Down on Me, Big Brother and the Holding Company with Janis Joplin made a big splash at the 1967 Monterey Pop Festival, and the next year came the hit album Cheap Thrills with the big hit single Piece of My Heart and of course the unforgettable album cover by Robert Crumb. 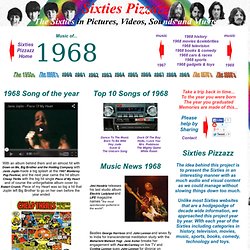 Piece of my Heart was so big a hit that Joplin left Big Brother to go on her own before the year ended. Vietnam War Era Music. Cambodian Surf Rockers Were Awesome, but the Khmer Rouge Killed Them. Cambodian surf rock artist Ros Sereysothea When a friend invited me to a “Cambodian surf party” in his run-down apartment in Sheffield, England, I figured he was just being a pretentious idiot. 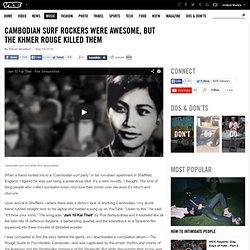 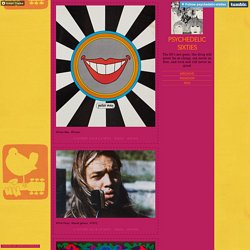 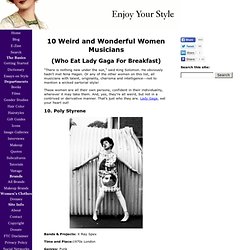 He obviously hadn't met Nina Hagen. Or any of the other women on this list, all musicians with talent, originality, charisma and intelligence––not to mention a wicked sartorial style! These women are all their own persons, confident in their individuality, wherever it may take them. And, yes, they're all weird, but not in a contrived or derivative manner. That's just who they are. 10. Y100 Top 300 Songs of the 90's (Sep. 2000) 50 Greatest Guitar Solos. Jimmy Page. 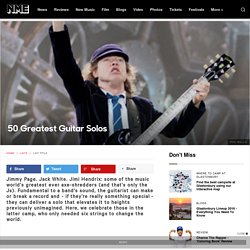 Jack White. Jimi Hendrix: some of the music world's greatest ever axe-shredders (and that's only the Js). Fundamental to a band's sound, the guitarist can make or break a record and - if they're really something special - they can deliver a solo that elevates it to heights previously unimagined. Here, we celebrate those in the latter camp, who only needed six strings to change the world. "This song is literally one very long solo. The track is a golden rock monolith, full of prog-esque bombast and fittingly Kerry Livgren’s solo doesn’t pull any punches.

Unlike their Britpop contemporaries, Suede never shied away from guitar solo bombast. Rage Against The Machine’s second album might have had nothing on their jaw-dropping debut but it had a few moments of genius, and Tom Morello’s squeaky, squawky fretboard abuse a few minutes into ‘Evil Empire’’s second track was probably the entire LP’s high water mark. "Jack is an absolute genius. Top 100: Greatest Songs (of All Time) It’s hard to come up with a list of the 100 greatest songs of all time and not leave people out, or be called a “son of a bitch” and other unflattering things by your readers. 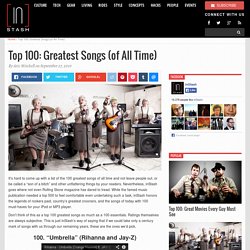 Nevertheless, inStash goes where not even Rolling Stone magazine has dared to tread. While the famed music publication needed a top 500 to feel comfortable even undertaking such a task, inStash honors the legends of rockers past, country’s greatest crooners, and the songs of today with 100 must-haves for your iPod or MP3 player. 100 Greatest Indie Rock Albums. Uncut’s 50 best singer-songwriter albums. Back in our December 2013 issue (Take 199), the Uncut team took on the emotional task of compiling a Top 50 of the most powerful, confessional singer-songwriter albums. 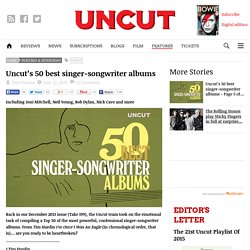 From Tim Hardin 1 to Once I Was An Eagle (in chronological order, that is)… are you ready to be heartbroken? The songs of summer. Memorial Day Weekend fills us with restless anticipation of how we will spend the long, hot days ahead, but it also brings fond memories of summers past, each one marked by a ubiquitous song that still has the power to bring us back to that time. 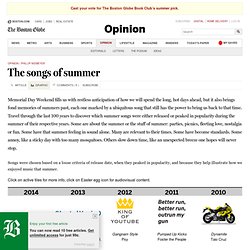 Travel through the last 100 years to discover which summer songs were either released or peaked in popularity during the summer of their respective years. Some are about the summer or the stuff of summer: parties, picnics, fleeting love, nostalgia or fun. Some have that summer feeling in sound alone. Many are relevant to their times. Some have become standards. Musiques. Music discovery. Every Day A Great Song. Stereomood – emotional internet radio - music for my mood and activities. Radio DavidByrne.com. Birthday No #1. Musicovery. Propos incohérents et bande son pour orgasme (Never Ending Blog saison 10) Latest Songs From MP3 & Music Blogs / The Hype Machine. Grooveshark - Listen to Free Music Online - Internet Radio - Free MP3 Streaming.

Most underrated songs by the most overrated artists. Songs for when you’re stuck in the friend zone… Requested by Big Teddy Bear · Compiled by BFFE Man, do I know the feeling. 01. The FADER. Discogs. Pitchfork. Electronic. 2520: The 25 Greatest Electronic Albums of the 20th Century. Electronic : Significant Albums, Artists and Songs, Most Viewed. Psychedelic Cosmos. Roots Music: Left, Right And Straight Down The Middle. Relationship Explorer.  Music discovery made easy. Le Tournedisque. The Music Maze. History of Rock in 100 Songs. 30 Albums That Define Cool.

Any album “list” is going to be incomplete. It’s going to be filled with albums you agree with, artists you hate and some sort of commentary that you probably disagree with. This list is no different. However, rather than ranking these in order of importance or influence, we decided to pick 30 Albums that Define Cool. It’s not a “Best of XXXX” list by any stretch of the imagination (because honestly, that would be presumptuous), just thirty albums that we think are cool. These things tend to spark huge debates, so feel free to let us have it in the comments. London Calling – The Clash Long before Punk Rock was about frosted tips and dudes wearing eyeliner, there was The Clash.

Legend – Bob Marley & The Wailers. A music map. It suggests other bands/artists you might like. via reddit.com. That One Song. Music Roamer - Discover New Music. Gnoosic - Discover new Music. Modcast.