Daniel Morgan murder: Unsolved 1987 crime puts the Met Police in the dock. The Golden Lion is under new management now. 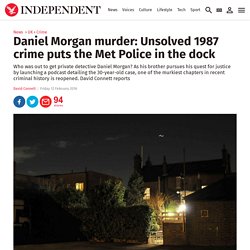 The old-style banquettes have gone, and the décor is fresher, less brown. But since long before gastropubs were a glint in a developer's eye, and long after those hostelries which wouldn't or couldn't move with the times were closed and converted into flats, the Golden Lion remains an unashamed community boozer with cheap beer, live bands, and the occasional coach outing to the races. A former Victorian music-hall palace of varieties, its presence on the main road that runs through Sydenham in south-east London is firmly rooted in the coming of the railway and of the suburbs that created a better life for tens of thousands of city dwellers.

Yuri Bezmenov: Sleepers Emerge and Messiah Appears. Sexually liberated, or just badly brought up? Nadezhda Popova, WWII ‘Night Witch,’ Dies at 91. The Nazis called them “Night Witches” because the whooshing noise their plywood and canvas airplanes made reminded the Germans of the sound of a witch’s broomstick. 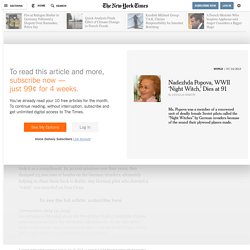 The Russian women who piloted those planes, onetime crop dusters, took it as a compliment. In 30,000 missions over four years, they dumped 23,000 tons of bombs on the German invaders, ultimately helping to chase them back to Berlin. Any German pilot who downed a “witch” was awarded an Iron Cross. These young heroines, all volunteers and most in their teens and early 20s, became legends of but are now largely forgotten. Flying only in the dark, they had no parachutes, guns, radios or radar, only maps and compasses. Tel Aviv mayor blames Israeli occupation for deadly cafe attack. Israeli police officers arrest a suspect shortly after a shooting attack in Tel Aviv on Wednesday (AFP) Tel Aviv’s mayor on Thursday blamed Israel’s occupation of the Palestinian territories for a deadly attack carried out by two Palestinian gunmen that left four Israelis dead in the Mediterranean city. 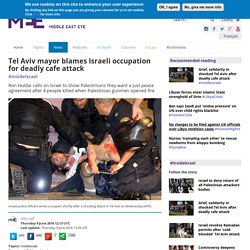 Labour Mayor Ron Huldai, 71, told Israeli army radio that the occupation was to blame for Wednesday evening’s attack when two armed Palestinian men from near Hebron in the southern West Bank walked into a popular cafe and opened fire on revellers. Watch @POTUS in "Couch Commander." Cosmos The In Lost – Catholic Backwardness. Thank you for your interest in Patheos newsletters! 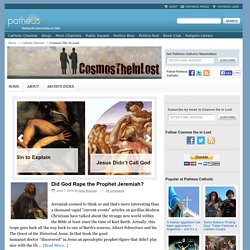 Please enter your email address below and click the "Subscribe" button. Thank you for your subscription. You can visit your Preference Center to complete your profile and see what else we have to offer. We apologize, we were unable to complete your subscription at this time, please try again later. If this error persists please contact us at communications@patheos.com. 'And things will fall with great force from above, which will give us nourishment and light.' – Leonardo. Popular Government : Sir Henry Sumner Maine. Botched Paramilitary Police Raids. Liberty or Equality: The Challenge of Our Time. Oz Conservative: British Labour shadow minister: "We know the problem are older white men"

☦ Citadel Foundations ☦ : Don't Wait on the Church. The Church is waiting on you For a long time, I have said that a Reactionary power play would need the backing of the religious authority. 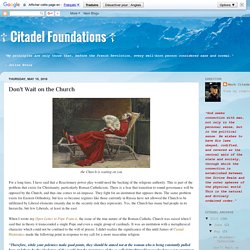 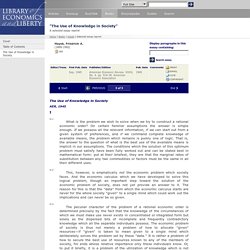 On certain familiar assumptions the answer is simple enough. If we possess all the relevant information, if we can start out from a given system of preferences, and if we command complete knowledge of available means, the problem which remains is purely one of logic. That is, the answer to the question of what is the best use of the available means is implicit in our assumptions. The conditions which the solution of this optimum problem must satisfy have been fully worked out and can be stated best in mathematical form: put at their briefest, they are that the marginal rates of substitution between any two commodities or factors must be the same in all their different uses.

About Neoreaction. The Integration of Theory and Practice – The Reactivity Place. [Ed. 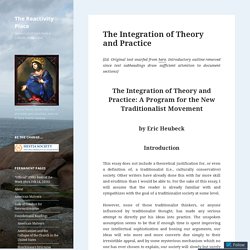 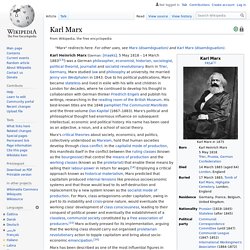 Born in Trier, Germany, Marx studied law and philosophy at university. He married Jenny von Westphalen in 1843. Due to his political publications, Marx became stateless and lived in exile with his wife and children in London for decades, where he continued to develop his thought in collaboration with German thinker Friedrich Engels and publish his writings, researching in the reading room of the British Museum. His best-known titles are the 1848 pamphlet, The Communist Manifesto, and the three-volume Das Kapital. 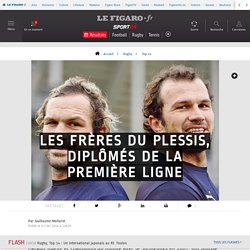 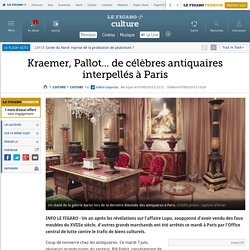 Originally, the scheme was limited to Russian nationals only, but the new version of the bill has extended this right to carefully-screened non-Russians as well. According to a report in the RT news service, the plots of land will be handed over to Russians and foreigners who want to build homes or start businesses in agriculture or tourism in the region. The Russian lower house Committee for Real Estate and Construction recommended that the State Duma approve the bill in the second reading in a session next week. Mexico’s foreign minister: Anti-Mexican bigotry is no different than anti-Semitism. Mexico’s foreign minister, speaking here Monday to a conference of American Jews, compared “the stench” of anti-Mexican “bigotry” in U.S. political dialogue to international anti-Semitism.

“Today in the 21st century, here in the United States, a climate of intolerance is sending a similar message: Mexicans go home,” Claudia Ruiz Massieu said in a speech to the American Jewish Committee’s annual conference in Washington. “Separate those who are different, blame the minorities, demonize the stranger.” If you have any doubt on all the political disruptions, don't. It's all Soros Funded. #RedNationRising #NeverHillary. "A Despotic Govt always keeps a standing army of newswriters who invent & put into papers whatever serves their ministers"- Thomas Jefferson. Je suis déjà mort, je n’ai qu’à continuer.

San Jose Police Chief Who Admits ALLOWING ATTACKS on Trump Supporters is Affiliated With La Raza. Here Are The Radical Leftist Anti-Trump Groups Behind The Chicago Protest. The usual suspects of local radical leftists were instrumental in organizing the anti-Trump rally protest in Chicago on Friday. Chicago ANSWER ANSWER (Act Now to Stop War and End Racism) Chicago is the Chicago franchise of an international network started in the wake of 9/11 and among the first to protest against a response in Afghanistan; since then the group is involved in most of the radical left’s favorite causes: anti-capitalist, pro-union, open borders, anti-war, anti-police causes.

The day after the Trump rally the group was holding a forum entitled “Taking Action to Support Palestine.” “We will have a report back from the People’s victory against Trump last night,” according to John Beacham, a coordinator with the organization, in a message on the Facebook page promoting the event. Top cop at anti-Trump mob is La Raza fan. A Twitter feed from San Jose Police Chief Eddie Garcia’s account shows him with two “future recruits” of La Raza’s Roundtable committee. (Credit: Twitter, via the Gateway Pundit.) Police in San Jose were forced Monday to fight off accusations they allowed a violent mob to disrupt a Donald Trump campaign rally and attack those in the crowd supporting the candidate. According to the Mercury News, local radio broadcasts fielded numerous calls from angry residents demanding the resignation of Mayor Sam Liccardo, who had earlier placed blame on Trump, and Trump’s immigration rhetoric, for igniting the violence.

Police on local airwaves, meanwhile, were criticized for letting anti-Trump protesters throw punches and water bottles at his supporters, the Gateway Pundit reported. Border Convoy - Left-Wing, Race-Based Hispanic Group La... Donald Trump does not have a campaign. Donald Trump is a candidate without a campaign – and it’s becoming a serious problem. Republicans working to elect Trump describe a bare-bones effort debilitated by infighting, a lack of staff to carry out basic functions, minimal coordination with allies and a message that’s prisoner to Trump’s momentary whims. “Bottom line, you can hire all the top people in the world, but to what end? Trump does what he wants,” a source close to the campaign said.