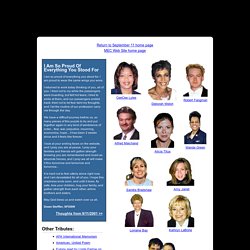 I am proud to wear the same wings you wore. I returned to work today thinking of you, all of you. I tried not to cry while the passengers were boarding, but felt hot tears; I tried to smile at them, and our passengers smiled back; tried not to let fear taint my thoughts, and I let the routine of our profession carry me through the day. We have a difficult journey before us, so many pieces of this puzzle to try and put together again in any kind of semblance of order... fear, war, prejudice, mourning, economics, hope... it has been 2 weeks since and it feels like forever. BARBARA OLSON - 9/11 FRAUD? Is Lady Booth Really Barbara Olson with Plastic Surgery? Where is Barbara Olson ? The Femme Fatales of 9/11. Grace spends so much time accusing Condit of murder that she doesn't keep up with her reading. 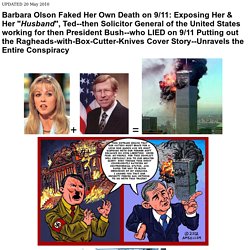 As she spoke, the full timetable was on Newsweek's website. Among other things, the Isikoff/Hosenball report said this: "Around 5 p.m., Condit left his office and went to a doctor's appointment, returning to Capitol Hill sometime after 6 p.m. to vote twice on the House floor on resolutions involving autism and supporting National Charter Schools Week.

" Those, of course, are recorded votes. Ted Olson - Biography - Lawyer - Biography.com. Ted Olson is a U.S. attorney who's argued many times in front of the Supreme Court, having served under the Ronald Reagan and George W. 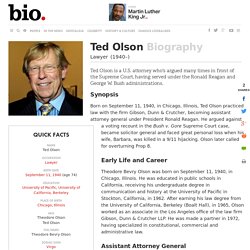 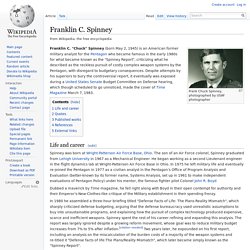 "Chuck" Spinney (born May 2, 1945) is an American former military analyst for the Pentagon who became famous in the early 1980s for what became known as the "Spinney Report", criticizing what he described as the reckless pursuit of costly complex weapon systems by the Pentagon, with disregard to budgetary consequences. Despite attempts by his superiors to bury the controversial report, it eventually was exposed during a United States Senate Budget Committee on Defense hearing, which though scheduled to go unnoticed, made the cover of Time Magazine March 7, 1983. Life and career[edit] Le complot du 11-Septembre n’aura pas lieu, par Alexander Cockburn. Où se trouvait la gauche américaine lors de la campagne qui, le 7 novembre, s’est conclue par la victoire des démocrates dans les deux chambres du Congrès ? 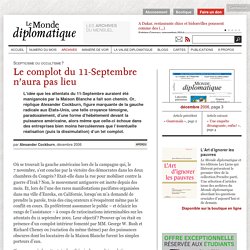 Alexander Cockburn obituary. As a young man, Alexander Cockburn, who has died from cancer at the age of 71, had something of the air of the classic Bollinger Bolshevik: elegant, with his blue shades and his Gauloises cigarettes, well-connected and perversely radical politically. 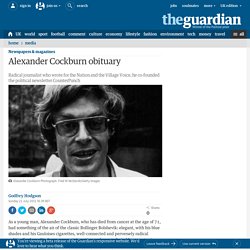 In reality he was more interesting and more admirable, a contrarian who despised cant. He had the courage to take on anything and anyone, from the most powerful organisations in the world to his closest friends, and the energy and persistence to follow his own path wherever it took him. The sheer volume of his journalism over 50 years was enormous. It ranged from the student newspaper Cherwell at Oxford to the magazine, CounterPunch, that he co-edited in recent years from the remote hamlet of Petrolia (formerly New Jerusalem) in northern California, by way of the Nation, the Village Voice and every radical magazine known or hardly known in America. Two examples suggest the sweeping violence and the wry humour of his style. 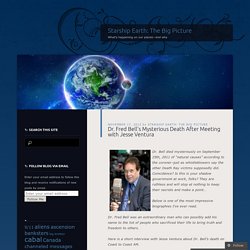 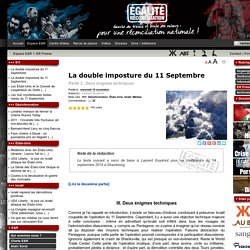 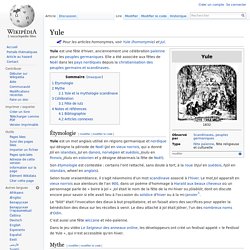 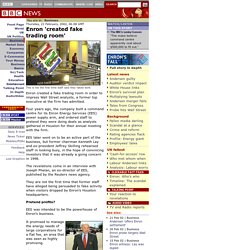 Four years ago, the company built a command centre for its Enron Energy Services (EES) power supply arm, and ordered staff to pretend they were doing deals as analysts gathered in Houston for their annual meeting with the firm. EES later went on to be an active part of the business, but former chairman Kenneth Lay and ex-president Jeffrey Skilling rehearsed staff in looking busy, in the hope of convincing investors that it was already a going concern in 1998. The revelations come in an interview with Joseph Phelan, an ex-director of EES, published by the Reuters news agency. They are not the first time that former staff have alleged being persuaded to fake activity when visitors dropped by Enron's Houston headquarters. Pretend profits? EES was intended to be the powerhouse of Enron's business. 11 Septembre 2001. 911 Eyewitness Hoboken TV 2005 David Schaufele Rick Siegel commentary. Missing Links (français) Israël et le 11 septembre 2001. 11 Septembre 2001. 9/11 - The Great American Psy-Opera.

Rick Rescorla. Cyril Richard "Rick" Rescorla (May 27, 1939 – September 11, 2001) was a retired United States Army officer of British birth who served with distinction in Northern Rhodesia as a member of the Northern Rhodesia Police (NRP) and as a soldier in the Vietnam War, where he was a Second Lieutenant in the United States Army.[2] As the director of security for the financial services firm Morgan Stanley at the World Trade Center, Rescorla anticipated both attacks on the towers and implemented evacuation procedures credited with saving many lives.

He died in the aftermath of the attacks of September 11, 2001, while leading evacuees from the South Tower. Early life[edit] Rick Rescorla was born in Hayle, Cornwall, UK, on May 27, 1939.[1][2] Rescorla’s family was of Celtic descent. Rescorla was a natural sportsman, setting a school record in the shot put, and was an avid boxer.

Military career[edit] Bill Cooper died 40 days after an anti Alex Jones speech : General Conspiracies. Evanlong wrote: It is very likely that psychiatric drugs had a lot to do with Columbine. I am in complete agreement with the assertion that psychiatric drugs, especially the SSRI's, of which Harris had been prescribed several, can have deranging effects on their consumers. In this particular case, given the material discussed earlier in this thread, there was probably much, much more at work and the drugs that some of the patsies were taking were probably not central to the shooting. [...] there is some great evidence for Columbine, and other shootings like it being government cover-ups. [...]

So why haven't more picked up on it? Pétition de soutien à Christopher Bollyn, journaliste américain réfugié en Europe. Dust, Debris at World Trade Center Site May Have Made Workers Sick. TOM BEARDEN, NewsHour Correspondent: Clouds of toxic dust rolled down New York City streets like tidal waves on September 11, 2001, engulfing tens of thousands of people fleeing the collapse of the World Trade Center. In the months that followed, thousands more labored in what they called “the pile,” first trying to rescue people, and later recovering human remains. And all the while, they inhaled the dust. Philip Landrigan is the chairman of preventive medicine at Manhattan’s Mt. Sinai School of Medicine. DR. TOM BEARDEN: The dust also contained billions of microscopic shards of glass and other contaminants.

JOHN WALCOTT, Former Police Detective: You trudged through, you know, this debris and smoke. TOM BEARDEN: NYPD Detectives John Walcott and his partner, Richard Volpe, spent hundreds of hours at the Trade Center. RICHARD VOLPE, Former Police Detective: Basically, I didn’t have a shovel or anything. Ground zero workers hold vigil for suffering 9/11 officer - Law Enforcement News. By KAREN MATTHEWSAssociated Press Writer Ground zero workers who are still suffering from World Trade Center smoke and dust held a vigil Thursday outside the hospital where one of their colleagues - a retired New York City police officer - is awaiting a lung transplant. "I want the federal government to give money to not just research, but to treat and cure these people," said James Zadroga, whose 34-year-old son, a retired police detective also named James Zadroga, died of pulmonary disease one year ago after spending hundreds of hours in rescue and recovery efforts after Sept. 11, 2001.

Zadroga joined a handful of trade center first responders and their family members outside Mount Sinai Medical Center, where Cesar Borja, 52, is in critical condition with pulmonary fibrosis. Borja, a 20-year police veteran who volunteered to work at ground zero during the cleanup effort there, can only breathe through a tube. One of his doctors, Dr. Christie lied, panel is told. Xanthos for News Christie Whitman Christie Whitman lied about air quality after the 9/11 attacks and should have to pay for medical monitoring and a cleanup, lawyers for lower Manhattan residents told an appeals court Monday. The lawyers urged a three-judge panel of the 2nd Circuit Court of Appeals to uphold a lower court decision declaring the former head of the Environmental Protection Agency can be held personally responsible for her deceptive comments.

Five days after the attacks, Whitman told reporters, "The good news continues to be that air samples we have taken have all been at levels that cause no concern. " In their class-action suit, residents, workers and students living around Ground Zero say they relied on Whitman's comments in deciding whether to return to an area coated with dust from the twin towers' collapse. "If she had not said this, they probably would have made their own decision," Rep.

"The consequence would be a default to silence," lawyer Alisa Klein said. Christie Whitman says air is safe days after 911. 9/11 Toxic Dust: Official Who Knowingly Lied Refuses To Testify. However, it must be remembered that Whitman and the EPA are accountable to the White House and act under the direct authority of the Bush Administration. It was the 2003 EPA Inspector General's investigation that revealed that it was the White House that had pressured EPA into changing its press releases to add more "reassuring" language.

The further memos revealed that Whitman conspired with the White House to falsely reassure New Yorkers that the air was safe. The New York Post also reported on the fact that the internal documents show it was Condoleezza Rice's office that gave final approval to the infamous Environmental Protection Agency press releases days after 9/11 claiming the air around Ground Zero was "safe to breathe,". Now Secretary of State, Rice was then head of the National Security Council - "the final decision maker" on EPA statements about lower Manhattan air quality, the documents say. The Nadler's hearing is scheduled for May 22, Clinton's is set for June 20. La tétrade lunaire à venir prise très au sérieux par Israël. Black 9/11: Money, Motive and Technology: Mark H. Gaffney: 9781936296460: Amazon.com: Books. L’étrange malédiction des microbiologistes dans le monde. JFK and the Unspeakable: Why He Died and Why It Matters: James W. Douglass: 9781439193884: Amazon.com: Books.

Israeli Cartoonist Compares Netanyahu to 9/11 Hijackers - NYTimes.com. In the wake of a report that an Obama administration official used a barnyard epithet defying Hebrew translation to refer to Prime Minister Benjamin Netanyahu, the Israeli newspaper Haaretz published a cartoon on the strained relations between Washington and Jerusalem that compared the Israeli leader to the hijackers who attacked the United States on Sept. 11, 2001. Continue reading the main story As the image circulated online, readers across the political spectrum in Israel and the United States expressed outrage at the depiction of a smiling Mr.