Media bias is real, finds UCLA political scientist. While the editorial page of The Wall Street Journal is conservative, the newspaper's news pages are liberal, even more liberal than the New York Times. 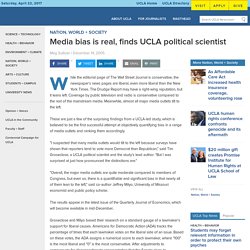 The Drudge Report may have a right-wing reputation, but it leans left. Coverage by public television and radio is conservative compared to the rest of the mainstream media. Meanwhile, almost all major media outlets tilt to the left. Skeptical Questions Everyone Should Ask. Because I am an activist skeptic I am often asked specific questions about how to be a better skeptic. 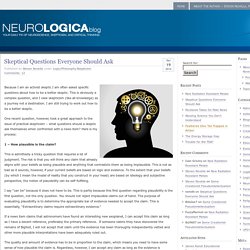 This is obviously a complex question, and I view skepticism (like all knowledge) as a journey not a destination. I am still trying to work out how to be a better skeptic. One recent question, however, took a great approach to the issue of practical skepticism – what questions should a skeptic ask themselves when confronted with a news item? Here is my process: The Conspiracy Theory Detector. This past September 23 a Canadian 9/11 "truther" confronted me after a talk I gave at the University of Lethbridge. 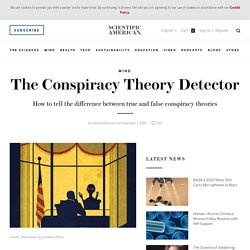 He turned out to be a professor there who had one of his students filming the “confrontation.” By early the next morning the video was online, complete with music, graphics, cutaways and edits apparently intended to make me appear deceptive (search YouTube for “Michael Shermer, Anthony J. Hall”). “You, sir, are not skeptical on that subject—you are gullible,” Hall raged. 'Blacklisting' of Right-Wing Stories More Proof that Facebook 'Rules the News' Revelations that Facebook may have regularly "blacklisted" conservative stories from the platform's "trending" news section was met with outrage on Monday from journalists across the political spectrum who found the company's alleged abuse of power "disturbing" and potentially dangerous. 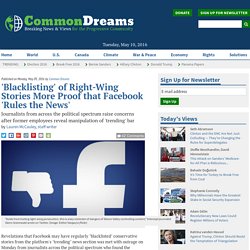 After speaking with several former "news curators," Gizmodo technology editor Michael Nunez reported Monday that the social media platform routinely censored stories "about the right-wing CPAC gathering, Mitt Romney, Rand Paul, and other conservative topics from appearing in the highly-influential section, even though they were organically trending among the site’s users. " The contracted employees also said they were "instructed to artificially 'inject' selected stories into the trending news module, even if they weren’t popular enough to warrant inclusion—or in some cases weren’t trending at all," and were specifically asked to exclude "news about Facebook itself in the trending module.

" Most of the information we spread online is quantifiably “bullshit” In his well-known essay On Bullshit, Harry Frankfurt defines bullshit as speech that is designed to impress but lacks a direct concern for the truth. 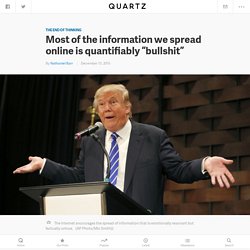 Under such a definition, a large portion of what we read online today is likely to be bullshit. Some types of bullshit are political in nature, such as the misleading claim that only 16 mass shootings took place under President Bush’s tenure, compared to a whopping 162 under President Obama. Such claims are valued for their persuasiveness in making a point, rather than for their connection to reality. The_world_is_not_falling_apart_the_trend_lines_reveal_an_increasingly_peaceful. Photo by Gokhan Sahin/Getty Images It’s a good time to be a pessimist. 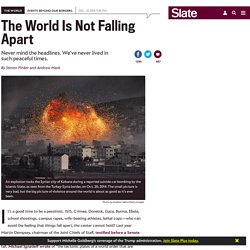 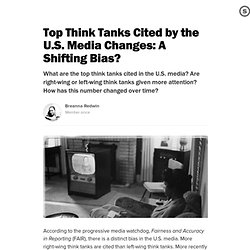 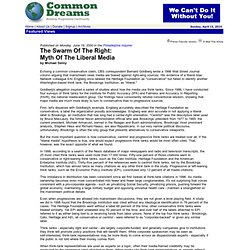 His evidence of a liberal bias: Network colleague Eric Engberg once labeled the Heritage Foundation as "conservative" but failed to identify another Washington-based think tank, the Brookings Institution, as "liberal. " Goldberg's allegation inspired a series of studies about how the media use think tanks. Since 1996, I have conducted four surveys of think tanks for the Institute for Public Accuracy (IPA) and Fairness and Accuracy In Reporting (FAIR), the national media-watch group. Our findings have consistently refuted conventional wisdom, showing that major media are much more likely to turn to conservative than to progressive sources. Pew Finds Extreme Conservative Bias In Media. A study by the Pew Research Center’s Project for Excellence in Journalism finds that, in the past five months, the American main stream media has given Pres. 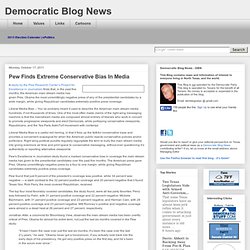 Obama the most unremittingly negative press of any of the presidential candidates by a wide margin, while giving Republican candidates extremely positive press coverage. Former fellows at conservative think tanks issued flawed UCLA-led study on media's "liberal bias. News outlets including CNN cited a study of several major media outlets by a UCLA political scientist and a University of Missouri-Columbia economist purporting to "show a strong liberal bias. 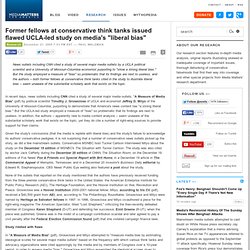 " But the study employed a measure of "bias" so problematic that its findings are next to useless, and the authors -- both former fellows at conservative think tanks cited in the study to illustrate liberal bias -- seem unaware of the substantial scholarly work that exists on the topic. In recent days, news outlets including CNN cited a study of several major media outlets, "A Measure of Media Bias" (pdf) by political scientist Timothy J. A Measure of Media Bias. A Measure of Media Bias Tim Groseclose Department of Political Science Jeff Milyo Department of Economics December 2004. How to Detect Bias in the News. 5 Ways to Spot a B.S. Political Story in Under 10 Seconds.

Taking conspiracy theories seriously. A police explosives expert prepares a controlled blast of a suspected parcel bomb in Athens on Nov. 1, 2010. Photo: AP/Thanassis Stavrakis Every now and then, I come across a publication conferring incisive analytic heft to cultural phenomena that society usually considers undeserving of serious consideration. The last great one I read, for example, was Harry Frankfurt’s treatise, On Bullsh*t.

When deftly executed, such writing can start with a knowing wink, but quickly plunge the reader into the unexpected depths of seemingly shallow waters. I recently found a paper from U.K. think tank Demos that provided just such a dunking. Study: Belief in Free-Market Economics Linked to Distrust of Science. April 22, 2013 | Like this article? Join our email list: Stay up to date with the latest headlines via email. This article was published in partnership with GlobalPossibilities.org. People who support free-market economics are more likely to reject proven science, according to a study published in Psychological Science last month. Examining 1,377 visitors to climate change denial blogs, researchers found that belief in a hands-off approach to economics predicted denial that human activity causes climate change, a fact accepted by 97 percent of scientists.

“The conspiracist ideation that all of the world’s scientific academies have conspired together to create a hoax known as global warming has found traction in American mainstream politics,” the study reads. Many have reported on climate skepticism’s connection to big industry and the American right. H/t Raw Story. Data Mining Reveals How Conspiracy Theories Emerge on Facebook. During the Italian elections last year, a post appeared on Facebook that rapidly became viral. The post’s title was this: “Italian Senate voted and accepted (257 in favor and 165 abstentions) a law proposed by Senator Cirenga to provide policy makers with €134 billion Euros to find jobs in the event of electoral defeat”.

The post was created on Facebook page known for its satirical content and designed to parody Italian politics. It contains at least four false statements: the senator involved is fictitious, the total number of votes is higher than is possible in Italian politics, the amount of money involved is more than 10% of Italian GDP and the law itself is an invention. How People Consume Conspiracy Theories on Facebook. 10 Search Engines to Explore the Invisible Web. Find In-Depth Articles on Google with a URL Trick. B.S. Detection for Digital Content. How to Conduct Scientific Research On the Internet (Without Getting Duped)

For scientific information. Chomsky warns of media distortion. By Niraj S. Desai The media and other institutions form prisms through which ideas and information reach the public, according to Institute Professor Noam A. Chomsky. Those who care about freedom and democracy, about controlling their own lives, must discern how social realities are distorted by such prisms, he said. Chomsky's comments came at his talk last night on the role of the media in the United States. Trust Me, I'm Lying: Confessions of a Media Manipulator. Nick Davies: Our media have become mass producers of distortion. Gingrich and Santorum: The Boys Who Cried Fox. Just last week, Newt Gingrich delighted observers on both the right and the left when he slammed Fox News for “bias” and “distortion.” Gingrich claimed that the conservative news channel slanted its coverage to favor the less conservative establishment candidate, Mitt Romney.

Seymour Hersh on Obama, NSA and the 'pathetic' American media. Seymour Hersh has got some extreme ideas on how to fix journalism – close down the news bureaus of NBC and ABC, sack 90% of editors in publishing and get back to the fundamental job of journalists which, he says, is to be an outsider. Glenn Greenwald and NY Times' Bill Keller Do Battle Over the Hidden Bias in Corporate News. Editor's Note: Former New York Times reporter David Cay Johnston interviewed Greenwald for Newsweek in an interview filled with powerful quotes and insights about the future of media in a digital era. "Glenn Greenwald, the lawyer-turned-journalist-turned-global headline for his reporting on leaked NSA documents, says there is about to be a revolution that will radically change how news organizations cover governments and other big institutions.

" Six Corporations That Control Almost Everything We Watch, Hear And Read. These 6 Corporations Control 90% Of The Media In America. Facts On Media In America: Did You Know? Congress Can No Longer Ignore Corporate Control of the Media. One of our best-kept secrets is the degree to which a handful of huge corporations control the flow of information in the United States. Whether it is television, radio, newspapers, magazines, books or the Internet, a few giant conglomerates are determining what we see, hear and read.

And the situation is likely to become much worse as a result of radical deregulation efforts by the Bush administration and some horrendous court decisions. Occupy Movement Media Success: Staying on Frame. How do we know when framing is successful for getting issues on the public agenda? One proxy for influence is to look at how well groups have been able to redirect media attention. Media Get Bored With Occupy—and Inequality. The Corporate Media's Attempt to Kill the Occupy Movement.

Rebecca Solnit, Why the Media Loves the Violence of Protesters and Not of Banks. Center for Media and Democracy. Poll Finds Fox News Is Worse Than No News at All - News. Fox Shut Out of Canada Because of a Law Against Lying During Newscasts « Say It Ain't So Already. What are newspapers for? - The Plum Line. Glenn Beck Tries To Vilify Wall Street Protests, Fails To Disclose His Coordination With Bank Lobbyists And Oil Barons.