The (lack of) science behind happiness and creativity — Quartz. Corporations intent on making employees more engaged and creative are focusing on happiness as the answer. 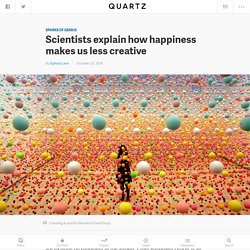 Chief Happiness Officer is an actual job at many companies. But most scientists say that creativity calls on persistence and problem-solving skills, not positivity. Computational scientist Anna Jordanous at Kent University and linguist Bill Keller of Sussex University in England dug through through over half century of study on the creative process in various fields, and isolated 14 components of creativity.

Happiness wasn’t one of them. Creativity is complex. Mark Davis, a psychologist at the University of North Texas Department of Management divides creativity into two phases; initial idea generation and subsequent problem-solving. But rigor is the key to overcoming obstacles and completing tasks—and good mood doesn’t improve problem-solving, which involves judgments that almost by necessity won’t feel good: critique and evaluation, experimentation and failure. Second-Level Thinking: What Smart People Use to Outperform.

“Experience is what you got when you didn’t get what you wanted.” 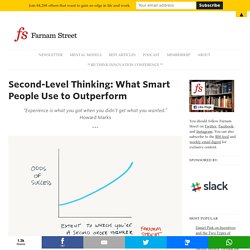 Howard Marks Successful decision making requires thoughtful attention to many separate aspects. Decision making is as much art as science. Brainstorming Doesn't Work; Try This Technique Instead. Evan Rosenbaum was 2 years old when his father brought home the Power Macintosh 7100. 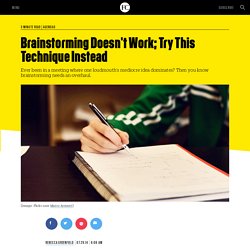 This was 1994, and the 7100, a new personal computer from Apple, was a hefty gray console, hardly anything to look at. Warren Berger's Three-Part Method for More Creativity. “A problem well stated is a problem half-solved.”— Charles “Boss” Kettering The whole scientific method is built on a very simple structure: If I do this, then what will happen? 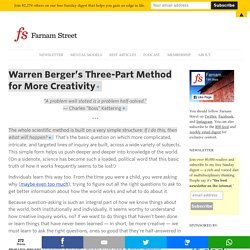 That’s the basic question on which more complicated, intricate, and targeted lines of inquiry are built, across a wide variety of subjects. This simple form helps us push deeper and deeper into knowledge of the world. (On a sidenote, science has become such a loaded, political word that this basic truth of how it works frequently seems to be lost!) Individuals learn this way too. Four easy, everyday habits that will boost your creativity. Whenever the question “So… what do you do?” 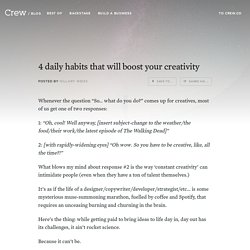 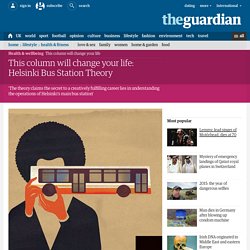 Actually, I probably never should, since it's a place I love so much on paper – dazzling, snow-blanketed landscapes, best education in the world, first country to give full suffrage to women, home of the Moomins – that reality could only disappoint. 4 Principles That Will Lead You To Breakthrough Creativity. Combing through the research, what are the overarching principles that we need to know to be more innovative thinkers in everyday life? 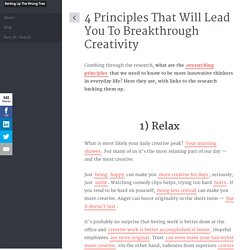 Here they are, with links to the research backing them up. 1) Relax What is most likely your daily creative peak? Three Creativity Challenges from IDEO’s Leaders. People often ask us how they can become more creative. 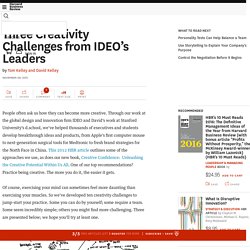 Through our work at the global design and innovation firm IDEO and David’s work at Stanford University’s d.school, we’ve helped thousands of executives and students develop breakthrough ideas and products, from Apple’s first computer mouse to next-generation surgical tools for Medtronic to fresh brand strategies for the North Face in China. This 2012 HBR article outlines some of the approaches we use, as does our new book, Creative Confidence: Unleashing the Creative Potential Within Us All. One of our top recommendations? Practice being creative. The more you do it, the easier it gets. RSA Shorts - Does Brainstorming Work? Managing Creativity and Innovation: Coming Up with a Perfect Brainstorm.

At Digital River, ideas are everything. 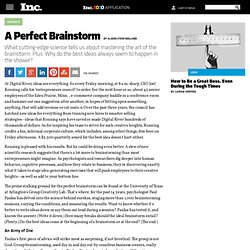 So every Friday morning, at 8 a.m. sharp, CEO Joel Ronning calls his "entrepreneurs council" to order. For the next hour or so, about 45 senior employees of the Eden Prairie, Minn., e-commerce company huddle in a conference room and hammer out one suggestion after another, in hopes of hitting upon something, anything, that will add revenue or cut costs. n Over the past three years, the council has hatched new ideas for everything from training new hires to smarter selling strategies--ideas that Ronning says have saved or made Digital River hundreds of thousands of dollars. Brainstorming Doesn’t Really Work. In the late nineteen-forties, Alex Osborn, a partner in the advertising agency B.B.D.O., decided to write a book in which he shared his creative secrets.

CreativityRulz: Brainstorming Rules: What TO DO and What NOT TO DO... These two short videos are priceless! 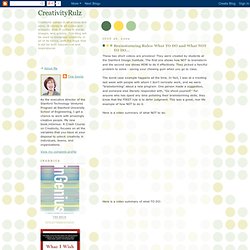 They were created by students at the Stanford Design Institute. The first one shows how NOT to brainstorm and the second one shows HOW to do it effectively. How to Train Your Creative Brain. Ah, ideas. Who doesn’t want more great ideas? I know I do. I usually think about ideas as being magical and hard to produce. The Creative Accident: Are You Looking for the Unexpected? Neat vs. Messy: Which Is Better for Creativity? There's a general assumption--in homes, in workplaces--that neatness corresponds to productivity. It begins in elementary school, with the annual rite of buying school supplies. You have the intent of staying organized, subject by subject, throughout the year. The Need for Sustainable Creativity. Recently, more and more research is coming to light that indicates talent is a matter of time spent practicing, not a matter of innate ability. The idea that it takes 10,000 hours of deliberate practice to master a skill is increasingly gaining mainstream acceptance.

When Niggling Stress Stops Creativity. It's the little niggling things that drain us. Big problems we usually meet head on. David Kelley: How to build your creative confidence. 29 Ways to Stay Creative infographic. 51 Ways to Explode Your Creativity. Creativity is the ability to find solutions to problems differently and with added value. How to be Creative. An Easy Way to Increase Creativity. Creativity is commonly thought of as a personality trait that resides within the individual. 6 Ways My Brain Stops Me From Creating – And How I'm Fighting Back. Thinking Exercises For The Whole Brain. Can You Teach Yourself to Be Creative? The Neuroscience of Imagination. How to Get Your Creative Juices Flowing. Creativity's Most Underappreciated Component: Persistence - Pacific Standard.