Efficient & Affordable Modular House Made From Wood Pallets! Back in 2008, Andreas Claus Schnetzer and Gregor Pils, entered their Paletten Haus into the GAUDI competition, which was seeking designs for minimal houses of leisure for the XXI century. 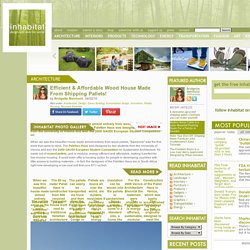 Their pallet house design stole the show and has since gone on to be displayed in many locations around Europe, including Grenoble, Venice, Vienna, Linz and Brussels. Since then, they have also won the 2009 Piranesi Student Honorable Mention. Homes have been made from pallets before, mostly because pallets are really quite useful materials. They are durable, easily reused and recycled, and they come in standard sizes around the world, making it easy to gain access to the materials no matter where you are. Two layers of pallets serve as the home’s walls, ceiling, and as a sunscreen to shade the structure and allow for ventilation. Encyclopedia Of Alternative Energy & Sustainable Living.

DIY Outdoor Brick Oven From Recycled Materials. My husband had wanted to build a pizza oven ever since he saw one at River Cottage, so we decided we would build one in as part of the permaculture design for the garden. 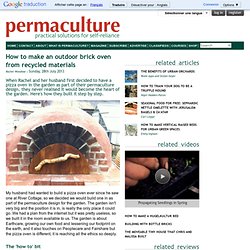 The garden isn't very big and the position it is in, is really the only place it could go. We had a plan from the internet but it was pretty useless, so we built it in the room available to us. The garden is about Earthcare, growing our own food and lessening our footprint on the earth, and it also touches on Peoplecare and Fairshare but the pizza oven is different, it is reaching all the ethics so deeply. The 'how to' bit We started with a load of old brick from the old garden wall, some old decking and breeze blocks and cement and plaster.

DIY Natural Log Stove. You don’t need a modern and expensive stove in order to cook something delicious in the backyard. 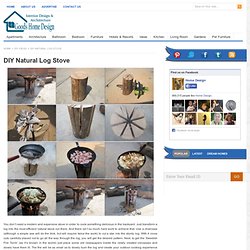 Just transform a log into the most efficient natural stove out there. And there isn’t so much hard work to achieve that. Use a chainsaw (although a simple axe will do the trick, but will require twice the work) to cut a star into the sturdy log. With 4 cross cuts carefully placed not to go all the way through the log, you will get the desired pattern. Next, to get the ‘Swedish Fire Torch’ (as it’s known in the world) just place some old newspapers inside the newly created crevasses and slowly have them lit. 33 DIY Fire Pit Ideas. One of my favorite things to do in the summer is to invite friends and family over, and gather around the fire pit. 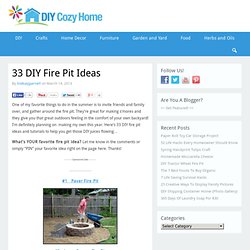 They’re great for making s’mores and they give you that great outdoors feeling in the comfort of your own backyard! I’m definitely planning on making my own this year. Here’s 33 DIY fire pit ideas and tutorials to help you get those DIY juices flowing… What’s YOUR favorite fire pit idea? Let me know in the comments or simply “PIN” your favorite idea right on the page here. ---------- Sponsored Links ---------- #1 Paver Fire Pit #2 Large Square Fire Pit #3 Deep, Round Fire Pit #4 Different Sized Paver Fire Pit. Affordable Housing Made From Shipping Pallets. Remember the efficient and affordable Pallet House from last spring? 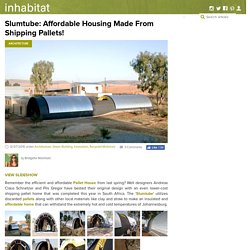 Well designers Andreas Claus Schnetzer and Pils Gregor have bested their original design with an even lower-cost shipping pallet home that was completed this year in South Africa. The 'Slumtube' utilizes discarded pallets along with other local materials like clay and straw to make an insulated and affordable home that can withstand the extremely hot and cold temperatures of Johannesburg. Schnetzer and Gregor built upon what they learned from constructing modular pallet houses, improving upon their original design to make it even more affordable. In previous designs, the pallets were used as floors, walls, ceilings and cladding, but they required sturdy wood beams, which were the most expensive part of the home. The new round design eliminates some of these expensive beams, but it’s still designed and built to European standards for structural soundness. + PalettenHaus Images © PalettenHaus.

Easy Fire Pit You Can Build Yourself. Countries With 100% Renewable Energy. Cahora Basso, Mozambique Which countries have the highest percentage of renewable energy – care to guess? 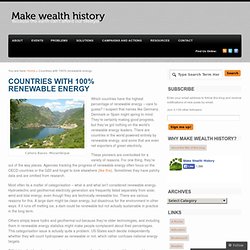 I suspect that names like Germany, Denmark or Spain might spring to mind. They’re certainly making good progress, but they’ve got nothing on the world’s renewable energy leaders. There are countries in the world powered entirely by renewable energy, and some that are even net exporters of green electricity. These pioneers are overlooked for a variety of reasons. Most often its a matter of categorisation – what is and what isn’t considered renewable energy. Others simply leave hydro and geothermal out because they’re older technologies, and including them in renewable energy statistics might make people complacent about their percentages.

Still, taking that broader perspective, here are some forgotten pioneers of the renewable energy world: Iceland – Built as it is on a volcano, Iceland has tapped the earth’s natural warmth to supply 85% of the country’s housing with heat. Like this: