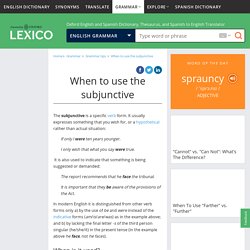 It usually expresses something that you wish for, or a hypothetical rather than actual situation: If only I were ten years younger. I only wish that what you say were true. It is also used to indicate that something is being suggested or demanded: The report recommends that he face the tribunal. It is important that theybeaware of the provisions of the Act. In modern English it is distinguished from other verb forms only a) by the use of be and were instead of the indicative forms (am/is/are/was) as in the example above; and b) by lacking the final letter -s of the third person singular (he/she/it) in the present tense (in the example above he face, not he faces). 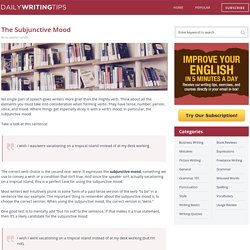 Think about all the elements you must take into consideration when forming verbs. They have tense, number, person, voice, and mood. Where things get especially dicey is with a verb’s mood, in particular, the subjunctive mood. Take a look at this sentence: I wish I was/were vacationing on a tropical island instead of at my desk working. The correct verb choice is the second one: were. Most writers will intuitively plunk in some form of a past-tense version of the verb “to be” in a sentence like our example. One good test is to mentally add “but I’m not” to the sentence. I wish I were vacationing on a tropical island instead of at my desk working (but I’m not). If he were ten feet tall (but he’s not), he could wash the windows without using a ladder. What is the Subjunctive Mood? An Explainer. The subjunctive mood is one of three moods in English grammar. 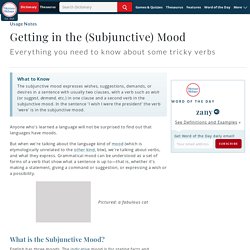 The subjunctive mood is for expressing wishes, suggestions, or desires, and is usually indicated by an indicative verb such as wish or suggest, paired then with a subjunctive verb. Often, the subjunctive verb is unchanged, as with visit in the sentence "I wish I could visit that cat. " In a sentence like "I wish I were that cat," the verb be undergoes a change. Anyone who's learned a language will not be surprised to find out that languages have moods. But when we're talking about the language kind of mood (which is etymologically unrelated to the other kind, btw), we're talking about verbs, and what they express. The Subjunctive. Reader Adam Cruge came across the following sentence: "I suggest that he have everything ready ahead of time. 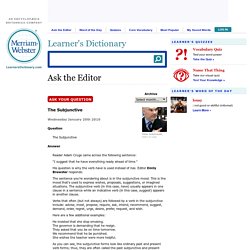 " His question is why the verb have is used instead of has. Editor Emily Brewster responds: Confused About the Subjunctive Mood? In most cases, the subjunctive form of a verb is usually the third-person form of the verb with the ‑s dropped, but the verb to be is a special case. 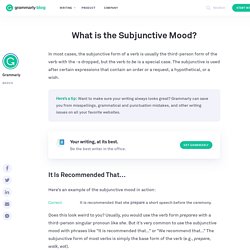 The subjunctive is used after certain expressions that contain an order or a request, a hypothetical, or a wish. Here’s a tip: Want to make sure your writing always looks great? Grammarly can save you from misspellings, grammatical and punctuation mistakes, and other writing issues on all your favorite websites. Your writing, at its best.

English subjunctive. Grammar expressing hypotheticals The subjunctive mood in English is used to form sentences that express wished-for, tentatively assumed, or hypothetical states of affairs, rather than things that the speaker intends to represent as true and factual. 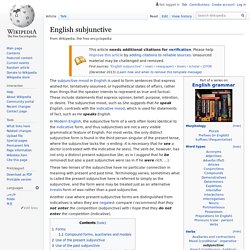 These include statements that express opinion, belief, purpose, intention, or desire. The subjunctive mood, such as She suggests that he speak English, contrasts with the indicative mood, which is used for statements of fact, such as He speaks English. In Modern English, the subjunctive form of a verb often looks identical to the indicative form, and thus subjunctives are not a very visible grammatical feature of English. Learning English Grammar. Diagnostic test (Part 1) Everyday Grammar: Subjunctive.

Unreal uses of past forms

Hunting down the subjunctive: BBC English Class. When to use the subjunctive. Learning English Grammar. Self-grading multiple-choice exercises. English language quiz - conditionals - 04. If you'd asked me before you started... 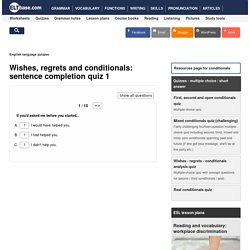 I would have helped you. I had helped you. I didn't help you.What would you have done... if you were in my position? If you had been in my position? If you would be in my position? English language quiz - conditionals - 03. GMAT Verbal: Subjunctive. Content Frame. Content Frame. When we teach noun clauses, the question of the subjunctive comes up after verbs such as insist, as well as after phrases like it is important. We actually teach our students to write sentences like these: The football coach insists that each player get eight hours of sleep per night. It is important that you be on time. However, I find that native English speakers often don't use a subjunctive, and prefer: The football coach insists that each player gets eight hours of sleep per night.