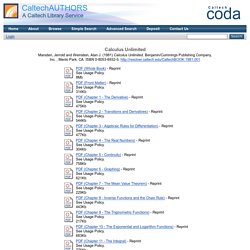 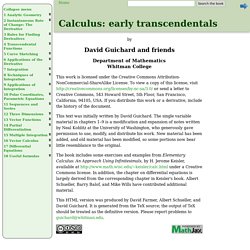 To view a copy of this license, visit or send a letter to Creative Commons, 543 Howard Street, 5th Floor, San Francisco, California, 94105, USA. If you distribute this work or a derivative, include the history of the document. This text was initially written by David Guichard. The book includes some exercises and examples from Elementary Calculus: An Approach Using Infinitesimals, by H. This HTML version was produced by David Farmer, Albert Schueller, and David Guichard. Calculus: early transcendentals. World Web Math: Calculus Index. Mathematics 1A (Calculus) Math 2B: Calculus. Math 2A: Calculus. 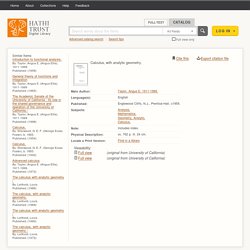 Wildcards Use * or ? Boolean Searching Use AND and OR between words to combine them with Boolean logic: e.g. Find your partner institution: Calculus, with analytic geometry.

The Circular Function/The Definite Integral. Differentiation. Differentiability implies continuity. Supporting and promoting the learning of mathematics everywhere. The Oxford Math Center. Calculus. APEX Calculus. Differential Calculus. Calculus Help. Applications Of Derivatives. Binomial theorem. The binomial coefficient appears as the bth entry in the nth row of Pascal's triangle (counting starts at 0). Each entry is the sum of the two above it. The coefficient a in the term of a xb yc is known as the binomial coefficient or (the two have the same value). Is often pronounced as "n choose b". History[edit] Special cases of the binomial theorem were known since at least the 4th century BC when Greek mathematician Euclid mentioned the special case of the binomial theorem for exponent 2.[1][2] There is evidence that the binomial theorem for cubes was known by the 6th century in India.[1][2] Binomial coefficients, as combinatorial quantities expressing the number of ways of selecting k objects out of n without replacement, were of interest to ancient Indian mathematicians. ,[4] and a clear statement of this rule can be found in the 12th century text Lilavati by Bhaskara.[4] In 1544, Michael Stifel introduced the term "binomial coefficient" and showed how to use them to express in terms of . 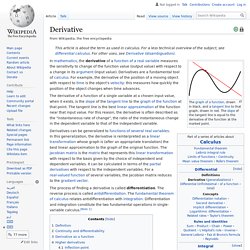 The slope of the tangent line is equal to the derivative of the function at the marked point. The derivative of a function of a real variable measures the sensitivity to change of the function value (output value) with respect to a change in its argument (input value). Derivatives are a fundamental tool of calculus. Slope. Slope: Slope is calculated by finding the ratio of the "vertical change" to the "horizontal change" between (any) two distinct points on a line. 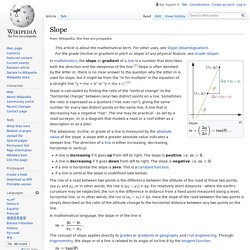 Sometimes the ratio is expressed as a quotient ("rise over run"), giving the same number for every two distinct points on the same line. MIT 18.01 Single Variable Calculus, Fall 2006. Calculus Online Textbook. Calculus.