Transition Words. What Is a Conjunction. What is a conjunction? 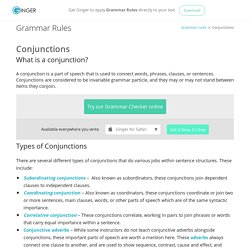 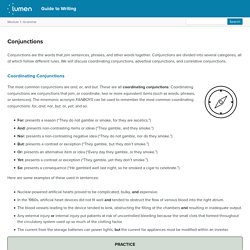 Conjunctions are divided into several categories, all of which follow different rules. Using Either, Or and Neither, Nor. Today on Ask a Teacher, we answer a question from Mehdi in Iran. 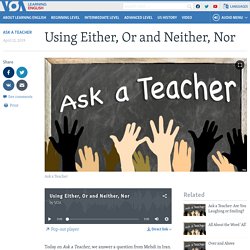 As well/soon/far/much/long as: What’s the difference? - Learners' Questions

Because as a Preposition. In Standard English, the word “because” can be used two ways. 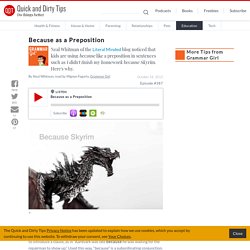 One of them is to introduce a clause, as in “Aardvark was late because he was waiting for the repairman to show up.” Used this way, “because” is a subordinating conjunction. The other is to team up with “of” to form what’s called a compound preposition. For example, “Aardvark was late because of heavy traffic.” In the past three or four years, though, a new usage for “because” has been developing. “Because Evil Emperor Zurg!” So what is this new way of using the word “because”? Because, because of and cos, cos of. Cos, a short form of because, is pronounced /kəz/ or /kɒz/ and can also be spelt ’cause. 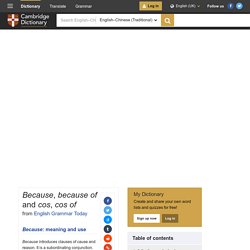 It can be used instead of because (and cos of instead of because of). We often use it in speaking, emails and text messages, especially in informal situations: A:Why are you and Adam not talking to each other? B:Cos he’s always saying nasty things about me. I don’t eat meat cos I love animals. They cancelled the trip cos of the snow. "Because Of" and "Due To" By Guest Author The saying “too many cooks spoil the broth” is spot on in the case of English language. 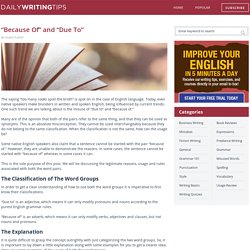 Today, even native speakers make blunders in written and spoken English, being influenced by current trends. Grammar Girl #683: ‘So’ and ‘So That’: Coordinating or Subordinating Conjunctions? Also, Too and As Well. Today on Ask a Teacher, a reader from Brazil asks about two common adverbs. 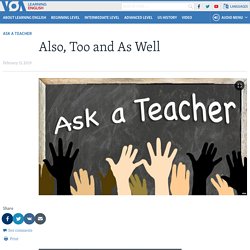 Here is his question: Question: Hello from Brazil! Teacher, could you explain to us how and when to use "as well" and "too"? Obrigado! Practice Activities: Conjunctions. Coordinating Conjunctions In this practice, you will combine multiple sentences into a single sentence. 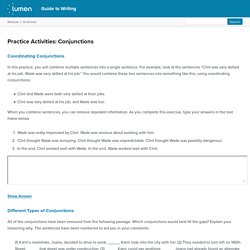 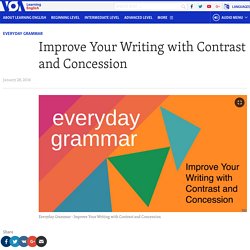 Today we are going to talk about words that connect opposing ideas. We call these ideas contrast or concession. Some of these adverbs are but, although, however and despite. These words will help you communicate more complex ideas. They will improve the flow and clarity of your writing. Contrast versus concession Let us begin by understanding the differences between contrast and concession. I used to live in Malaysia, but now I live in Thailand. Even though I live in Malaysia, I work in Thailand. The first example shows a simple contrast. Content Frame. Like and as have these principal distinctions: Like—used as a preposition—is followed by a noun, a pronoun, a gerund (-ing form of the verb, used as a noun), or a noun clause. 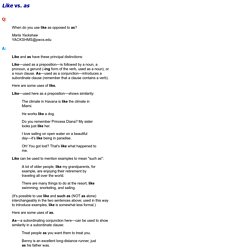 As—used as a conjunction—introduces a subordinate clause (remember that a clause contains a verb). Here are some uses of like. Like—used here as a preposition—shows similarity: The climate in Havana is like the climate in Miami. He works like a dog. Like can be used to mention examples to mean "such as": A lot of older people, like my grandparents, for example, are enjoying their retirement by traveling all over the world.

(It's possible to use like and such as (NOT as alone) interchangeably in the two sentences above; used in this way to introduce examples, like is somewhat less formal.) Treat people as you want them to treat you. Developmental English: Introduction to College Composition. Conjunction-itis - Columbia Journalism Review. Many generations of students have had certain grammar “truths” drilled into their little heads. One is the “myth” that infinitives can’t be split. But today we’re going to discuss the myth that sentences can’t start with conjunctions. (Actually, whether teachers do indeed prohibit conjunctive beginnings seems to be almost as much a myth as the prohibition itself. But more on that later.)

Learning English Grammar. Conjunction Exercises. So you've been learning about the different types of conjunctions and you need a few conjunction exercises to help cement your learning? Then you've come to the right place. Coordinating, subordinating and correlative conjunctions are all used to link phrases and clauses in a sentence. They're necessary to create complex sentences, compound sentences, or to join multiple ideas or actions together. Sentence Combining Worksheets. Boundless Writing. A conjunction is a part of speech that connects words or phrases. Learning Objectives Choose the correct conjunction to connect two clauses Key Takeaways Key Points. English Composition I: Cerritos College. Conjunctions are the words that join sentences, phrases, and other words together. Conjunctions are divided into several categories, all of which follow different rules.

Types of Conjunctions. They may often be small words, but conjunctions are highly functional and very important for constructing sentences. Did you notice that just now the coordinating conjunctions but and and were used to link different parts of that first sentence? This is the main job of conjunctions. Coordination and Subordination. By the end of this section, you will be able to: Identify coordination and subordination in writing.Combine sentences and ideas using coordination.Combine sentences and ideas using subordination. In the previous section, we learned how to use different patterns to create sentence variety and to add emphasis to important points in our writing. Next, we will examine two ways in which we can join sentences with related ideas: Coordination. Joining two related ideas of equal importance. Subordination. Learning English.