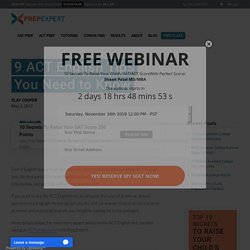 Free Class 10 Secrets To Raise Your SAT Score 200 Points Even if English is your least-favorite class, there’s no reason to sweat the ACT English test, the first part of the exam and the second-longest. Just follow the tips and tricks listed below, and you’ll be well on your way to a 36! If you want to ace the ACT English test, brush up on the rules of grammar, answer questions in paragraph-by-paragraph chunks, and use answer choices as clues to what grammar and organization goofs you should be looking for in the passages. More details below. Answer Questions Paragraph-By-Paragraph Answer questions in paragraph-by-paragraph chunks, rather than one at a time.

A bunch of the English test questions requires you to have read the entire paragraph the question is contained in—rather than the one or two sentences in between one question and the next—in order to answer them. What Are Run-On Sentences? Dashes, Colons, and Commas. People sometimes ask me about the difference between a colon and a dash since they can both be used to introduce the next part of a sentence. 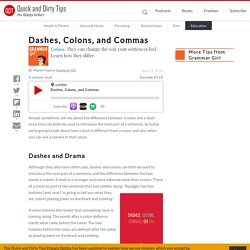 So today we’re going to talk about how a dash is different from a colon, and also when you can use a comma in their place. Dashes and Drama Although they also have other uses, dashes and colons can both be used to introduce the next part of a sentence, and the difference between the two marks is subtle. 'It Is I' Versus 'It Is Me' It is I, Grammar Girl, here to help you understand when to use the words “I” and “me.” 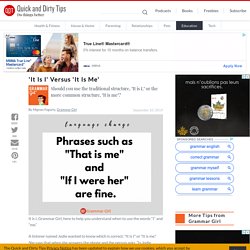 A listener named Jodie wanted to know which is correct: "It is I" or "It is me. " She says that when she answers the phone and the person asks, "Is Jodie there? " she usually responds by saying, "This is she. " But one of her friends says this is incorrect, and now they have a $5 bet on the question. The short answer is that Jodie wins. What Are Linking Verbs? Linking verbs are words like "is," "was," "were," "appear," and "seem," which don't describe an action so much as describe a state of being.

Who called Jodie? Serial Comma. Here's a listener: Hi, Grammar Girl. How to Make Words That End in Y Plural. A member of our Facebook Grammar Girl group recently wrote in with a question about plurals. 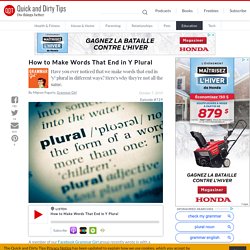 He was wondering if we knew why the plurals of some words that end with the letter "y" take an “-s,” whereas others take an “-ies.” Rich, we have an answer for you. Fortunately, in English, plurals do have some consistent rules. Most Plurals Are Formed by Adding ‘-s’ or ‘-es’ For example, most plurals are formed by simply adding “-s” or “-es” to the end of a word. Parallel Structure: An Unparalleled Letdown. Bad grammar weakens good writing, but some bad writing is grammatically flawless. 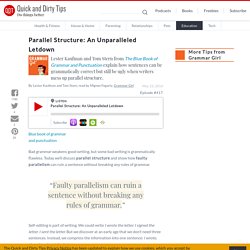 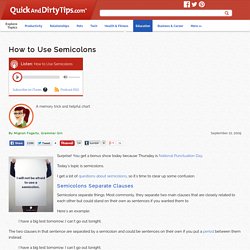 You get a bonus show today because Thursday is National Punctuation Day. Today's topic is semicolons. I get a lot of questions about semicolons, so it's time to clear up some confusion. Semicolons Separate Clauses Semicolons separate things. How to Use Semicolons. How to Use Quotation Marks Correctly. Quotations can bring your writing to life―the reader imagines someone saying the words―but quotations are also vexing to format. 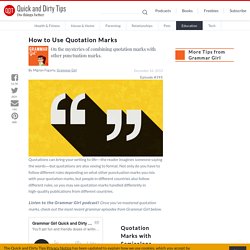 Quotation Marks with Semicolons, Colons, and Dashes First, let’s review the easy (but rare) stuff: semicolons, colons, and dashes always go outside quotation marks: Bob snorted and said, “I don’t believe in zombies”―right before thirty of them emerged from the tunnel. Her favorite song was “Gangnam Style”; she spent weeks trying to learn the dance. She sang her favorite line from “I Don’t Wanna Stop”: “You’re either in or in the way.” You Don't Need Quotation Marks (And You Can Quote Me On That) Once upon a time, Grammar Girl readers, we were cut from the same cloth. 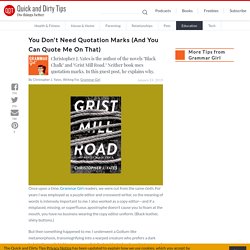 For years I was employed as a puzzle editor and crossword writer, so the meaning of words is intensely important to me. I also worked as a copy editor—and if a misplaced, missing, or superfluous apostrophe doesn’t cause you to foam at the mouth, you have no business wearing the copy editor uniform. (Black leather, shiny buttons.) But then something happened to me.

Question Tags. Periods and Parentheses. When You Need Periods After Abbreviations. Parentheses, Brackets, and Braces. Hyphens in Ages. A lot of people get confused about when to use hyphens when writing ages, and I think it’s because sometimes an age is a noun, sometimes an age is an adjective that comes before a noun and modifies it, and sometimes an age is an adjective that comes after a noun. When to Hyphenate Ages First we’ll talk about when you do hyphenate an age: You do it when the age is acting like a noun and when the age is an adjective that comes before the noun and modifies the noun. In this example, the age—70-year-old—is used as a noun, and you hyphenate it: That 70-year-old with a purple hoodie loves Justin Bieber. Just as you’d say, “That woman with the purple hoodie loves Justin Bieber,” with “woman” as the noun, the age—70-year-old—can take the place of “woman.”

Here’s an example of an age that comes before the noun it modifies. Direct and Indirect Quotations. Let's figure out when you need to put single words such as “yes” and “no” in quotation marks. 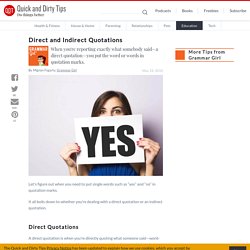 It all boils down to whether you’re dealing with a direct quotation or an indirect quotation. Direct Quotations A direct quotation is when you’re directly quoting what someone said—word-for-word, not paraphrasing. Apostrophes: Ruth’s Chris and Carl's Jr. Mike wrote in with a question that I’ve always wondered about too. 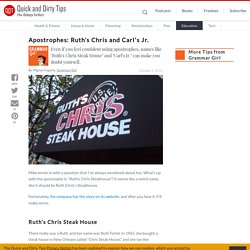 What’s up with the apostrophe in “Ruth’s Chris Steakhouse”? It seems like a weird name, like it should be Ruth Chris’s Steakhouse. Fortunately, the company has the story on its website, and after you hear it, it’ll make sense. Ruth’s Chris Steak House There really was a Ruth, and her name was Ruth Fertel. But in 1976 a kitchen fire destroyed the restaurant, and for some reason, the terms of the sale when she bought the restaurant wouldn’t let her open a new restaurant in another location with the name “Chris Steak House,” but she needed to move to stay in business after the fire. Carl’s Jr. What Is a Comma Splice? Once you learn about comma splices, you notice them everywhere, and a listener named Jo has started noticing them. She wrote, “Comma splices are the rage on the internet these days. When to Use Commas Before Quotations. We recently got a question about commas from one of our listeners, Benjamin Wolfe.

Benjamin asked this: “Have you done a post on when to include a comma before a quotation? The rules seem dicey.” Benjamin, we agree! This is one of those questions that doesn’t have a single answer. In fact, there are four, count ‘em, four different ways you can introduce a quotation. When to Use—and Not Use—an Em-Dash. When people think of punctuation marks, it is usually the handy comma, the imperious colon, or the overly excited exclamation mark that comes to mind.

Prefixes and Suffixes. Today's topic is prefixes and suffixes, those little things you add to the front or back of words. They're like little word-creation factories that let you change the meaning of stem words. You can, for example, go from happy to unhappy by adding the prefix un- to happy.

You might do this when you add the suffix -ectomy to the word spleen to get splenectomy. Ooh, that sounds painful, a word you create by adding the suffix -ful to pain. On the other hand, we hope that our discussion of spelling and punctuation when it comes to prefixes and suffixes will be pain-free. What Are Affixes? Commas with Transition Words.