Grammar Lesson #1 - Tips to Improve Your Sentence Structure. Find the adjectives and the adverbs.

Adverbs. Purdue OWL Writing Exercises. This page is brought to you by the OWL at Purdue University. 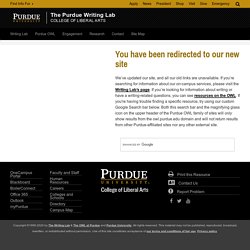 When printing this page, you must include the entire legal notice. Copyright ©1995-2018 by The Writing Lab & The OWL at Purdue and Purdue University. All rights reserved. This material may not be published, reproduced, broadcast, rewritten, or redistributed without permission. Use of this site constitutes acceptance of our terms and conditions of fair use. We’ve updated our site, and all our old links are unavailable. 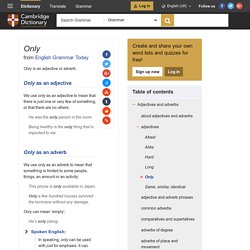 He was the only one who could read in the village. Not: He was the only who could read … That was the only large t-shirt left in that colour. There were only four United fans in the room. We can use only as an adverb in different positions, depending on its focus. Only Jason knows where the key is kept. Only a very small bed will fit in this room. If the focus is on another part of the sentence, we usually put only in the normal mid position for adverbs (between the subject and the main verb, or after the modal verb or first auxiliary verb, or after be as a main verb): I only go home once a month.

She had only arrived at midnight the night before. She’s only sixteen. Adverbs still have something to add (to verbs) Adverbs are lovely. 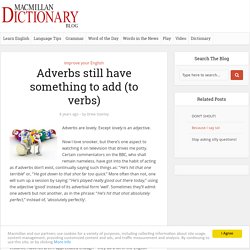 Except lovely is an adjective. Now I love snooker, but there’s one aspect to watching it on television that drives me potty. Certain commentators on the BBC, who shall remain nameless, have got into the habit of acting as if adverbs don’t exist, continually saying such things as: “He’s hit that one terrible” or, “He got down to that shot far too quick.” More often than not, one will sum up a session by saying: “He’s played really good out there today,” using the adjective ‘good’ instead of its adverbial form ‘well’.

Sometimes they’ll admit one adverb but not another, as in the phrase: “He’s hit that shot absolutely perfect,” instead of, ‘absolutely perfectly’. An adverb can modify a verb, an adjective, a phrase, a clause, or in this case, another adverb. One might say that English should reflect the prevalent form of contemporary communication, in order that new learners might meet least impediment when attempting to comprehend each other. Learning English. Learning English. Learning English. PARTICIPIAL ADJECTIVES. Participial Adjectives. Most present and past participle forms of verbs that describe emotion or feelings can be used as adjectives, but the meanings of the participles are not the same. 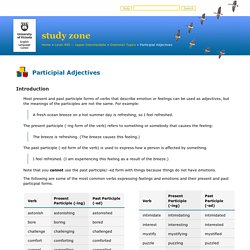 For example: A fresh ocean breeze on a hot summer day is refreshing, so I feel refreshed. The present participle (-ing form of the verb) refers to something or somebody that causes the feeling: The breeze is refreshing. (The breeze causes this feeling.) The past participle (-ed form of the verb) is used to express how a person is affected by something. I feel refreshed. Note that you cannot use the past participle/–ed form with things because things do not have emotions. The following are some of the most common verbs expressing feelings and emotions and their present and past particpial forms. Here are some other common verbs which follow the same pattern to express feelings and emotions: When you are sure that you understand the lesson, you can continue with the exercises. 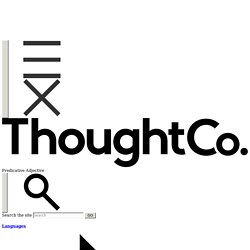 (Contrast with an attributive adjective.) Another term for a predicative adjective is a subject complement. "From a discourse point of view," say Olga Fisher and Wim van der Wurff, "predicative adjectives are often salient because they convey 'new' rather than 'given' information" (in A History of the English Language, 2006). See Examples and Observations below. Examples and Observations "I was happy, Dad was proud, and my new friends were gracious. " BBC World Service. Adjective phrases: position. We can’t use adjectives with the prefix a- before a noun. 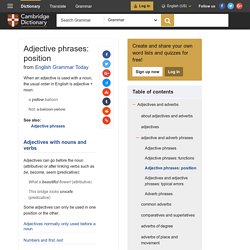 We use them after linking verbs such as be, seem, become, feel, smell, taste. Common examples of adjectives with the prefix a- include awake, alive, asleep, aboard (on a plane, boat, bus or train), afloat, ablaze (on fire): Katie was awake at the time. Not: Katie was an awake person at the time. 12 Questions and Answers About English Grammar. You'll find more than 2,000 language-related terms in our glossary, and several of the most common (or commonly misunderstood) receive extended treatment in Grammar Questions & Answers. 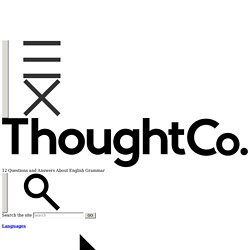