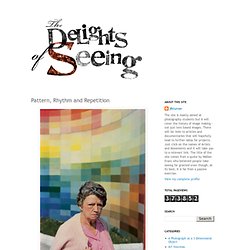 By repeating something again and again it can become something else. In music if you take a sound and repeat it, it not only changes in itself but it can change our mood. Religious chanting is an example of how the sound can change peoples emotions. Even if you are not placed in a trance like state there is a definite change in our mood by hearing repeated sound.Try this yourself - follow this link to use the Tone Matrix. By adding white squares to the grid you can make a pattern that will loop - creating a delicate sound like a music box. 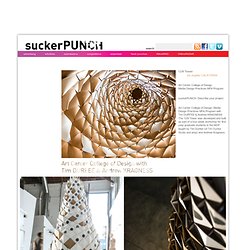 Art Center College of Design, Media Design Practices MFA Program with Tim DURFEE & Andrew KRAGNESS: The 12/8 Tower was developed and built as part of a four-week workshop for first year graduate students in the MDP taught by Tim Durfee (of Tim Durfee Studio and amp) and Andrew Kragness. This project was an experiment in the integration of media—in this case music—and architecture. We started by studying composer Steve Reich’s seminal early work Clapping Music (1972).

We also investigated two precedents—the bell tower and the pipe organ. The idea of this project was to collapse the “bell tower” and “pipe organ” conceptually to the point where the physical form of the tower itself is the “pipes” (in this case, panels to be struck to make a “clap” for Reich’s piece.) sP: What or who influenced this project? Rhythm_movement_pattern [Autosaved] 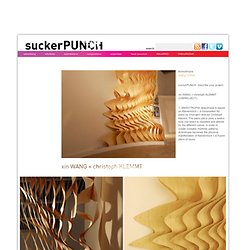 ANISOTROPIA: Anisotropia is based on Klavierstück I, a composition for piano by Orproject director Christoph Klemmt. The piano piece uses a twelve tone row which is repeated and altered by the different voices, in order to create complex rhythmic patterns. The installation is based on a simple strip morphology instead of a twelve tone row, which creates the structure, openings and rhythm within itself, its repetition happening in space instead of time. 2. 3. sP: What or who influenced this project? sP: What were you reading/listening to/watching while developing this project? sP: Whose work is currently on your radar? Additional credits - Project Team: Shuai Yang, Duan Duan, Haobin Lee. Rhythm-and-repetition. Design in Art: Repetition, Pattern and Rhythm Tutorial. Repetition is an object, form, or figure that is repeated. 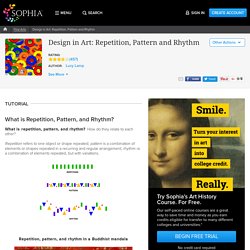 To get an idea of the effect of repetition in an artwork, look at the illustration below. There appears to be two boxes. In the first box, there is one colored circle. The second box is overflowing with multicolored circles, so many that they cannot all be contained within the box. What words do you think of when you look at the two different boxes? Donald Judd: repetition as a minimalist Donald Judd, untitled (1969/1982), anodized aluminum each of 10 boxes 6 x 27 x 24 inches Walker Art Center Gift of Mr. and Mrs. From the Walker Art Center website: "One of the foremost practitioners of Minimal Art, Donald Judd is best known for his sleek, boxlike constructions made of industrial materials such as aluminum, plywood, sheet metal, and plexiglass. Image from the curriculum guide for the exhibition So, Why Is This Art?

Easter Island: Ahu Tongariki, repetition as intimidation Ahu Tongariki on Easter Island. c 1250--1500 CE. Phenomenology of rhythm in design. Abstract Rhythm in design, as explored in this research, is proposed to be the result of cognitive performance generated stylistically by creators and recognized consciously by beholders. 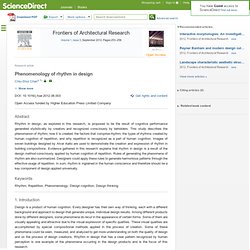 This study describes the phenomenon of rhythm; how it is created; the factors that comprise rhythm; the types of rhythms created by human cognition of repetition, and why repetition is recognized as a part of human cognition. Images of seven buildings designed by Alvar Aalto are used to demonstrate the creation and expression of rhythm in building compositions. Evidence gathered in this research explains that rhythm in design is a result of the design method consciously applied by human cognition of repetition. Rules of generating the phenomena of rhythm are also summarized. Keywords. WriteDesign - Rhythm and Pattern - Principle of Art and Design. Repetition, Rhythm and Pattern. LESSON 4 THINGS TO ADD.