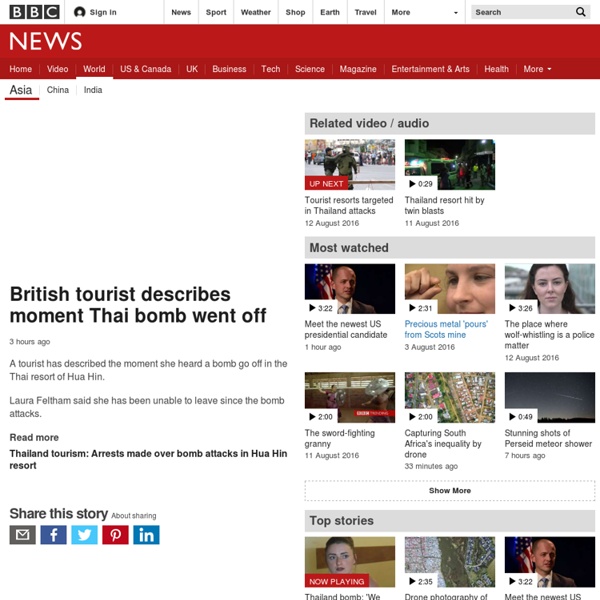 George Monbiot: We Can't Be Silent on Climate Change or the Unsustainability of Capitalist System This is a rush transcript. Copy may not be in its final form. NERMEEN SHAIKH: While Houston continues to deal with the aftermath of Hurricane Harvey, we look at the media silence on the human contribution to it.

Mood swings: The man mapping Britain's emotions Image copyright Daniel Raven-Ellison National Geographic explorer Daniel Raven-Ellison has just completed a 2.5 million step walk across Britain's cities and parks and electronically measured his changing mood with each step. Wearing an EEG monitor strapped to his head he collected millions of snapshots of the activity in his brain as he crossed 69 cities over seven months in the UK from June last year. The monitor measures the electrical activity of the brain from sensors located across key areas of the scalp. Alison Teal's Powerful Message on Plastics Alison Teal, TV star and eco-adventurer filmmaker, recently traveled to Indonesia to work with the conservation group Orca365 and was stunned to see how the global plastic epidemic is impacting some of the world’s most naturally beautiful locales. “Growing up and working in places like Bali, the Maldives, Mexico, and Hawaii, I’ve watched plastic pollution plague these pristine places,” she told The Inertia. The short clip above is just a fraction of what Teal observed on her trip but it also proffers a few strategies that anyone and everyone can incorporate into their daily lives to wean off of single-use plastics. Advertisement This video file cannot be played.

Woodberry Wetlands: London’s new wildlife oasis Sir David Attenborough has opened a new nature reserve in London, a functioning reservoir, which has been hidden from the public for nearly 200 years As of 1 May, local residents of Woodberry Down – and, indeed, the entire general public – are able to freely visit and explore Woodberry Wetlands, London’s newest nature reserve. This 11-hectare reservoir in Hackney has been closed to the public since it was built in 1833, but thanks to an intervention by the London Wildlife Trust, it’s now making an assortment of wildlife accessible to Londoners. The reserve was opened by Sir David Attenborough, who toured the Thames Water-owned site thanking volunteers for their efforts in cleaning up the wetlands.

Mapping emotions in Victorian London Mapping Emotions in Victorian London is a crowdsourcing project designed to expand possibilities for research in the humanities. The project has invited anonymous participants to annotate whether passages drawn from novels, published mainly in the Victorian era, represented London places in a fearful, happy, or unemotional manner. This data from the crowd allowed us to generate the maps you find here, revealing a previously unseen emotional geography of Victorian London. We now invite you to explore them, and the underlying fictional passages, to discover the ways in which London was constructed, navigated, and represented emotionally in its fiction.

Wallace & Gromit's creators make new animation to try to save the seas By Layal Liverpool Turtle Journey tells the tragic story of a turtle family travelling home through an ocean under growing pressure from climate change, plastic pollution, oil drilling and overfishing. The short animation, which you can watch below, was produced by Aardman – the creators of Wallace & Gromit – and campaigners Greenpeace to highlight the plight of the world’s oceans. Climate change is already affecting the habitats of sea turtles. Changing ocean currents are damaging the coral reefs some turtles rely on to survive, while rising seas threaten to destroy their beach habitats. Plastic, which has been found in hundreds of marine species, poses another danger.

Project aims to grow a 'city of trees' Image copyright City of Trees A project aims to plant three million trees - one for every man, woman and child - in Greater Manchester over the next 25 years. Those behind City of Trees hopes the effort will not only green the region but improve our understanding of the benefits trees provide to society. These include reducing stress, improve air quality and the amount of time shoppers spend in retail areas.

Cork's climate-rapping schoolkids go global as they feature on huge American site - Pupils at a small primary school near Bantry have gone global with their brilliant rap video on tackling climate change. The kids at Cappabue N.S. - a mixed, two-teacher school in the Shehy Mountains north of Bantry - made the video with the help of Cork producer Garry McCarthy of award-winning Cork City based music collective GMC Beats. The video, which was first featured on CorkBeo, has gotten such a reaction since appearing online that it is now getting attention in America. NowThis, a huge news site in New York with 14 million Facebook likes and 2.5 million Twitter followers, featured the videos on their social media channels. Over 900,000 people viewed the rapping clip with more than 15,000 clicking the like button on Facebook for the kids.

How Big Is Your City, Really? When our sense of a place distorts its actual size. In almost every way in which we humans view the world, scale and context are crucially important. When we build a skyscraper, it’s impressive because it’s so much taller than what’s around it, or what’s come before it. When we learn of a new chameleon, it’s wonderful because it’s so much smaller than anything else we’ve ever seen before.