100 Percent Renewable Energy is Within Reach. There are no technological or economic reasons why we cannot completely replace fossil fuels with renewable sources of energy. 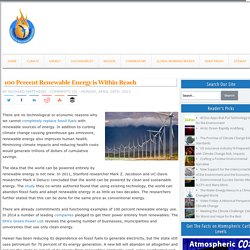 Jacobson and UC-Davis researcher Mark A Delucci concluded that the world can be powered by clean and sustainable energy. California's 40 Years Of Energy Efficiency Efforts Have Saved $90B In Utility Costs. August 25th, 2015 by Derek Markham Over the last 40 years, the state of California has been investing in energy efficiency initiatives, to the tune of about $1 billion per year, and these efforts have saved its residents some $90 billion in utility costs, created “hundreds of thousands” of energy efficiency jobs, and by the end of the decade will have avoided the pollution equivalent of 41 power plants, according to the Natural Resources Defense Council (NRDC). 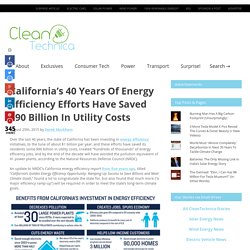 An update to NRDC’s California energy efficiency report from five years ago, titled “California’s Golden Energy Efficiency Opportunity: Ramping Up Success to Save Billions and Meet Climate Goals,” found a lot to congratulate the state for, but also found that much more (“a major efficiency ramp-up”) will be required in order to meet the state’s long-term climate goals. The report, which was co-produced with Environmental Entrepreneurs (E2) is available to download at NRDC as a PDF. 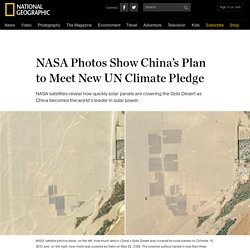 On Tuesday, China said it would halt the rise in its heat-trapping emissions within 15 years and would boost its share of non-fossil fuel energy use to 20 percent by 2030. Its commitment, similar to the one it made last year in a joint U.S. agreement, comes ahead of UN climate talks in Paris in December. China’s goal reflects how quickly it’s becoming the world’s leader in solar power. It produces two-thirds of all solar panels, and last year, it added more solar capacity than any other country, according to the International Energy Agency or IEA. Germany still has the most cumulative photovoltaic capacity, but second-place China will likely soon close the gap. The Gobi Desert reveals why. Recent photos from NASA satellites show that solar panels now cover about three times as much Gobi land as they did three years ago. To infinity and beyond: Apollo project to boost green energy growth. UK’s chief climate diplomat calls for £15bn a year R&D spending on clean energy to make it cheaper than coal Astronaut Buzz Aldrin walks on the surface of the moon near the leg of the lunar module Eagle during the Apollo 11 mission. 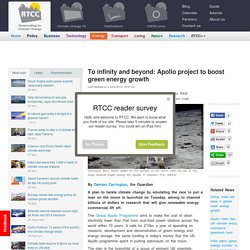 (Pic; NASA) By Damian Carrington, the Guardian. Developing Nations’ Renewable Investments to Exceed Those of Developed World. When President Barack Obama signed his historic climate change agreement with China last year, there were those among his opponents who felt he had given away too much without asking for enough in return. 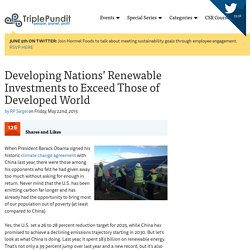 Never mind that the U.S. has been emitting carbon far longer and has already had the opportunity to bring most of our population out of poverty (at least compared to China). Yes, the U.S. set a 26 to 28 percent reduction target for 2025, while China has promised to achieve a declining emissions trajectory starting in 2030. Arik Ring sur Twitter : "Solar For The Masses! #Africa’s Mobile-#Solar #Energy Revolution #Green #Climate.

Africa’s Mobile-Sun Revolution. The transformative potential for mobile communications is upon us in every aspect of life. 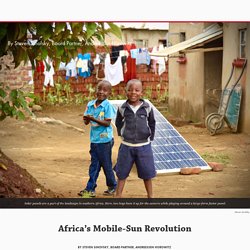 In the developing world where infrastructure of all types is at a premium, few question the potential for mobile, but many wonder whether it should be a priority. Many years of visiting the developing world have taught me that, given the tools, people — including the very poor — will quickly and easily put them to uses that exceed even the well-intentioned ideas of the developed world.

Poor people want to and can do everything people of means can do, they just don’t have the money. Previously, I’ve written about the rise of ubiquitous mobile payments across Africa, and the work to bring free high-speed Wi-Fi to the settlements of South Africa. One thing has been missing, though, and that is access to reliable sources of power to keep these mobile phones and tablets running. 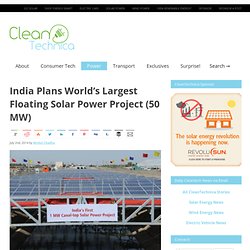 Fuel Cell Technologies Office Home Page. World Energy Report (Infographic) Clean Power Published on September 30th, 2011 | by Zachary Shahan "World Energy Report" (CLICK TO ENLARGE) OK, so this isn’t an official World Energy report just released by some international energy organization or research institute, but it is a fun infographic created by some friends of ours over at MyEnergy.com that helps to visualize and convey some key energy facts. 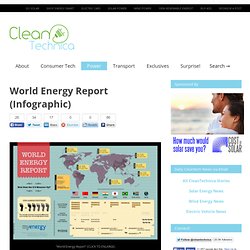 One of the most striking points (visualized with the Big Macs) is how much more energy per person the U.S. and other developed nations use compared to India, China, or the world as a whole. Here’s a good quote from the World Watch Institute on that (from State of the World 2008: Innovations for a Sustainable Economy): “Clearly, Western Nations have been the key driver of climate change so far. How Do We Respond?