These Are the World’s Friendliest Countries. We know travel plans are impacted right now. 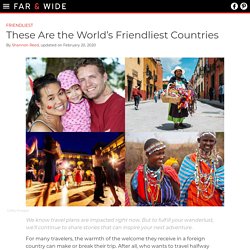 A World Turned Upside-Down. In this season of infection, the stock market little more than a twitching corpse, in an atmosphere of alarm and despondency, I am reminded of the enlightenments of the strict curfew Uganda endured in 1966. 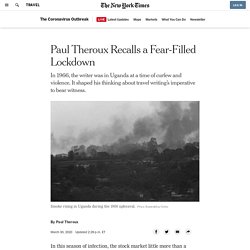 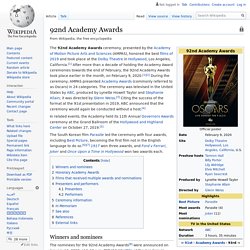 The ceremony was televised in the United States by ABC, produced by Lynette Howell Taylor and Stephanie Allain; it was directed by Glenn Weiss.[3] Citing the success of the format at the 91st presentation in 2019, ABC announced that the ceremony would again be conducted without a host.[4] Winners and nominees Winners are listed first, highlighted in boldface.[11] Honorary Academy Awards. 52 Places to Go in 2020. Carnival Cruise Line now has a dress code for its passengers. Think your profanity-laced T-shirt would be fun to wear on your next cruise? 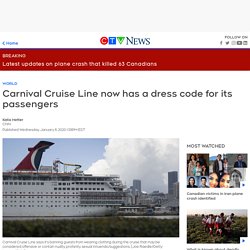 Carnival Cruise Line says no. Guests should "ensure their clothing and accessories are respectful to fellow guests," reads Carnival's website FAQ. That means nothing worn during the cruise should "contain any message that may be considered offensive or contain nudity, profanity, sexual innuendo/suggestions.

In addition, clothing/accessories should not promote negative ethnic or racial, commentary, or hatred or violence in any form. " While Carnival's crew isn't "the clothing or expression police," spokesman Vance Gulliksen says the change came after some reports in other travel sectors of customers wearing clothing with "very threatening messages. " Cahiers du Cinéma's Top 10 Of 2019 Features 'Synonyms,' 'Bacurau' & Other Surprises. Guildford. Guildford ()[1] is a large town in Surrey, England, 27 miles (43 km) southwest of London on the A3 trunk road midway between the capital and Portsmouth.[2][3] Due to recent development running north from Guildford, and linking to the Woking area, Guildford now officially forms the southwestern tip of the Greater London Built-up Area, as defined by the Office for National Statistics. 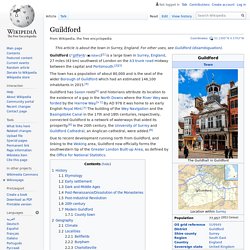 History[edit] Etymology[edit] Early settlement[edit] Rural Celtic Bronze Age pieces have been found in the town.[12] Some of the tiles built into Guildford Castle may be Roman, and a Roman villa has been found on Broad Street Common[6] at the end of Roman Farm Road just west of Guildford's Park Barn neighbourhood.[13] Dark and Middle Ages[edit] Incredible India. Nestled in the Trikuta mountains, Vaishno Devi Temple, 61 km from Jammu, is visited by thousands of devotees every year. 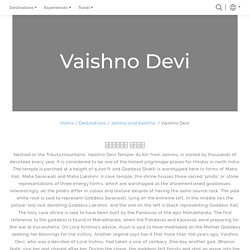 It is considered to be one of the holiest pilgrimage places for Hindus in north India. The temple is perched at a height of 5,200 ft and Goddess Shakti is worshipped here in forms of Maha Kali, Maha Saraswati and Maha Lakshmi. A cave temple, the shrine houses three sacred ‘pindis’ or stone representations of three energy forms, which are worshipped as the aforementioned goddesses. Interestingly, all the pindis differ in colour and texture despite of having the same source rock.

Incredible India. Three great reasons to hit 'buy' for this $900 airfare to Dubai. Puerto Rico Travel Guide. Adventure Canada is now offering expeditions to Antarctica. After over 30 years of running explorations of the Arctic, Adventure Canada has announced that they will be listing new Antarctica expeditions for Winter 2021. 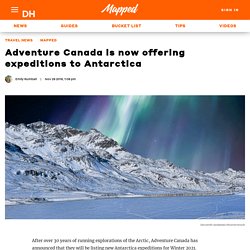 Launched in association with Chimu Adventures, three new voyages will be available for guests to embark on upon the 198-passenger Ocean Endeavour. The entire purpose of building the vessel was to carry passengers to remote destinations and environments. Equipped with 20 Zodiac small watercraft, multiple lounges, advanced navigation equipment, and a top-deck observation room, the Ocean Endeavour “boasts a 1B ice class, enabling her to explore throughout the Arctic.”

Travellers will be able to choose from three expeditions. Antarctica, South Georgia & Falklands Explorer. Discover 5 underrated cities in Italy. Overtourism may be a new word, but the concept is familiar to any tourist who has had the misfortune of being nudged, elbowed, and crowded out while trying to visit one of the world’s coveted destinations. 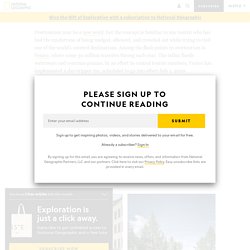 Among the flash points in overtourism is Venice, where some 30 million travelers throng each year. The influx floods waterways and overruns piazzas. In an effort to control tourist numbers, Venice has implemented a day-tripper tax, scheduled to go into effect July 1, 2020. Venice is not the only city in Italy to contend with overwhelming crowds; Rome and Florence also suffer from too much visitation. National Geographic’s list of best trips to take in 2020. The world awaits. 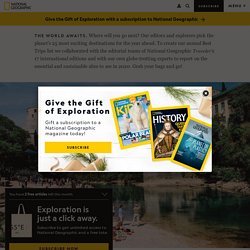 Where will you go next? Our editors and explorers pick the planet’s 25 most exciting destinations for the year ahead. To create our annual Best Trips list we collaborated with the editorial teams of National Geographic Traveler’s 17 international editions and with our own globe-trotting experts to report on the essential and sustainable sites to see in 2020. Grab your bags and go! Mostar, Bosnia and Herzegovina Why go now: Mark 25 years of peace.

World & Travel. How to Move to Mexico. New 'Social Impact' Cruise Aims To Do Voluntourism Right. A “social impact” cruise announced this week promises a meaningful travel experience for do-gooder globetrotters -- and aims for lasting benefits for both tourists and locals. 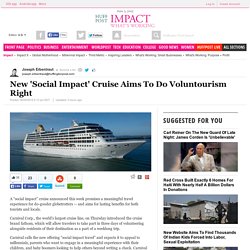 Carnival Corp., the world's largest cruise line, on Thursday introduced the cruise brand fathom, which will allow travelers to take part in three days of volunteering alongside residents of their destination as a part of a weeklong trip. Carnival calls the new offering “social impact travel” and expects it to appeal to millennials, parents who want to engage in a meaningful experience with their children, and baby boomers looking to help others beyond writing a check.

Carnival predicts 40 percent of fathom travelers will be cruse first-timers. World & Travel. On a Mission to See the World.