‘Mad Men’ Sets Streaming Pact With Amazon, AMC Snags Linear Rights. In a move that even the great Don Draper might not have seen coming, the new streaming home for “Mad Men” will be Amazon’s IMDb TV. 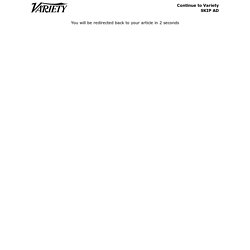 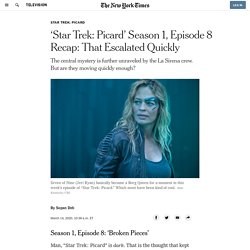 That is the thought that kept running through my head during this week’s episode. There have been other dark moments throughout the series — but this is the episode when the darkness really stood out. From the start of the episode — when several Romulans stand in a circle, go insane and commit suicide — to Admiral Clancy’s randomly telling Picard to shut up with an unnecessary expletive, I kept thinking that this is a grim world Picard inhabits — and a much different one than the franchise creator, Gene Roddenberry, had in mind decades ago. But we are what is in front of us. And when Soji meets Rios for the first time, he has a moment of confusion and seemingly, panic. 10 Twilight Zone Episodes Whose Themes Still Resonate Today. The Twilight Zone stands as one of the most important and influential television series of all time. 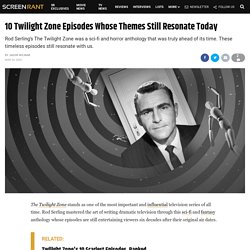 Rod Serling mastered the art of writing dramatic television through this sci-fi and fantasy anthology whose episodes are still entertaining viewers six decades after their original air dates. Related: Twilight Zone's 10 Scariest Episodes, Ranked Many episodes dealt with social issues and human nature. I'd Do Anything (2008 TV series) British television series The second programme, which aired on 22 March, focussed mainly on the 42 women at Nancy School and the procedure of finding the final twelve women to compete in the weekly live show for the part of Nancy. 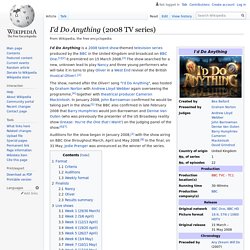 The twelve boys who will compete on the live show for the part of Oliver were also introduced throughout the programme. Saturday - Live. Desi Arnaz. Cuban-born American musician, actor and television producer Desiderio Alberto Arnaz y de Acha III (March 2, 1917 – December 2, 1986), better known as Desi Arnaz, was a Cuban-born American actor, musician, bandleader, comedian and film and television producer.[2] He is best known for his role as the witty Ricky Ricardo on the American television series sitcom I Love Lucy, where he co-starred with his then wife, dramatic and comedic actress Lucille Ball (1911–1989).[2] Arnaz and Ball are generally credited as the innovators of the syndicated rerun, which they pioneered with the I Love Lucy series.[3] Early life[edit] Arnaz was born Desiderio Alberto Arnaz y de Acha, III, in Santiago de Cuba, Cuba,[2] to Desiderio Alberto Arnaz y de Alberni II (March 8, 1894 – May 31, 1973) and his wife Dolores de Acha (April 2, 1896 – October 24, 1988). 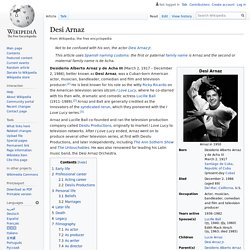 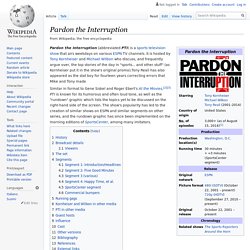 It is hosted by Tony Kornheiser and Michael Wilbon who discuss, and frequently argue over, the top stories of the day in "sports... and other stuff" (as Kornheiser put it in the show's original promo).Tony Reali has also appeared as the stat boy for fourteen years correcting errors that Mike and Tony made History[edit] Black Mirror. British science fiction anthology television series Black Mirror is a British dystopian science fiction anthology television series created by Charlie Brooker. 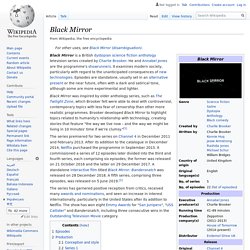 He and Annabel Jones are the programme's showrunners. It examines modern society, particularly with regard to the unanticipated consequences of new technologies. Episodes are standalone, usually set in an alternative present or the near future, often with a dark and satirical tone, although some are more experimental and lighter. Black Mirror was inspired by older anthology series, such as The Twilight Zone, which Brooker felt were able to deal with controversial, contemporary topics with less fear of censorship than other more realistic programmes. C. J. Cregg. Creation and development[edit] According to series creator Aaron Sorkin, casting for C.J. 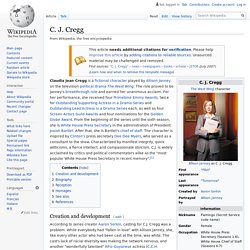 Cregg was a problem. While everybody had "fallen in love" with Allison Janney, she, like every other actor who had been cast at the time, was white. Bradley Whitford. American actor Bradley Whitford (born October 10, 1959)[1] is an American actor and political activist, and he is noted for his portrayal of White House Deputy Chief of Staff Josh Lyman in the NBC television political drama The West Wing (1999-2006), which was nominated for three consecutive Primetime Emmy Awards from 2001 to 2003, winning in 2001. 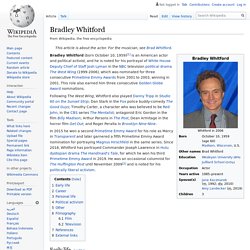 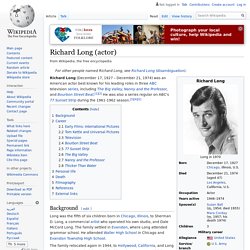 I, Claudius (TV series) 1976 BBC TV series Among many other productions and adaptations, Graves's Claudius novels have also been adapted for BBC Radio 4 broadcast (2010) and for the theatre (1972). I, Claudius follows the history of the early Roman Empire, narrated by the elderly Roman Emperor Claudius, from the year 24 BC to his death in AD 54. As discussed in the 2002 documentary I, Claudius: A Television Epic, the scene in episode 8, "Zeus, by Jove! " where Caligula cuts the fetus from Drusilla's womb was considered too shocking and was therefore re-edited several times, even on the day of its premiere by order of Bill Slater, then head of Serials Department.

Carolyn Jones. American actress Early life[edit] Carolyn Jones was born in Amarillo, Texas, the daughter of Chloe Jeanette Southern,[3] a housewife, and Julius Alfred Jones, a barber.[1][4][5] After her father abandoned the family in 1934, Carolyn and her younger sister, Bette Rhea Jones,[3] moved with their mother into her parents' Amarillo home.[6] Jones suffered from severe asthma that often restricted her childhood activities, and when her condition prevented her from going to the movies, she became an avid reader of Hollywood fan magazines and aspired to become an actress.