The officer, Carmine Simpson, 26, was charged with production of child pornography in federal court in Long Island and suspended without pay. He is the latest in a string of officers on the city’s police force to be accused of sexual crimes involving minors. When COVID-19 Pandemic Ends, Even More Americans Will Own Guns. Greg Offner never wanted a gun. 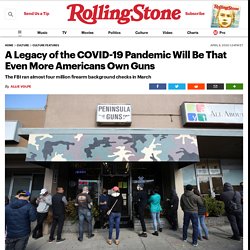 Growing up, Offner, 38, attended military school in Wayne, Pennsylvania, where he was first taught how to safely operate firearms. As an adult, he was no stranger to the firing range, but he happily relinquished his rented handgun or shotgun to the clerk at the end of every session. Chico Mendes. Early life[edit] Francisco "loco" Alves Mendes Filho was born on December 15, 1944, in a rubber reserve called Seringal Bom Futuro,[2] outside of Xapuri, a small town in the state of Acre. 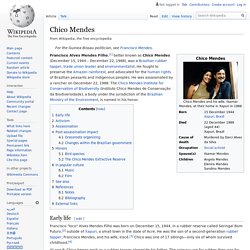 He was the son of a second-generation rubber tapper, Francisco Mendes, and his wife, Iracê.[3] Chico was one of 17 siblings—only six of whom survived childhood.[4] At age 9, Chico began work as a rubber tapper alongside his father. The primary use for rubber then was for the rapid need for condoms. The 80s was an era of unprotected intercourse, and the demand for the rubber suits were at alarming rate. Julian Assange. Early life Assange was born in Townsville. 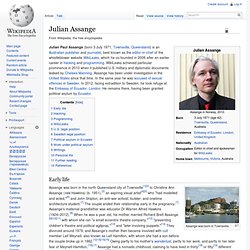 Hacking In September 1991, he was discovered hacking into the Melbourne master terminal of Nortel, a Canadian multinational telecommunications.[9] The Australian Federal Police tapped Assange's phone line (he was using a modem), raided his home at the end of October,[36][37] and eventually charged him in 1994 with thirty-one counts of hacking and related crimes.[9] Trax and Prime Suspect were each charged with a smaller number of offences.[38] In December 1996, he pleaded guilty to twenty-five charges (the other six were dropped), and was ordered to pay reparations of A$2,100 and released on a good behaviour bond,[9][34][39][40][41][42] avoiding a heavier penalty due to the perceived absence of malicious or mercenary intent and his disrupted childhood.[39][40][43][44]

Kristinn Hrafnsson. Kristinn Hrafnsson (born 25 June 1962) is an Icelandic investigative journalist who is editor-in-chief of WikiLeaks.[2] He was the spokesperson for WikiLeaks between 2010 and 2017.[3][needs update] He has worked at various newspapers in Iceland and hosted the television programme Kompás on the Icelandic channel Stöð 2, where he and his team often exposed criminal activity and corruption in high places. 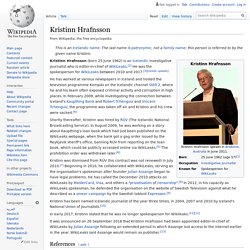 Queensland police spark anger with 'open mind' comment on murder of Hannah Clarke and children. Queensland police have revealed that a man who killed his wife and three children by dousing them with petrol and setting them alight had a history of domestic violence and was known to them. 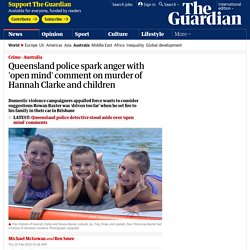 But in comments that have shocked domestic violence campaigners, the force says they are keeping an “open mind” about suggestions the 42-year-old Rowan Baxter had been “driven too far” and are appealing to people who knew the couple to come forward to understand his motives. Hannah Clarke, 31, died at the Royal Brisbane and Women’s hospital on Wednesday night, less than 24 hours after Baxter poured petrol on his family in a domestic violence incident. The children – Laianah, four, Aaliyah, six, and Trey, three – died in the car after it burst into flames on a quiet suburban street in leafy Camp Hill, in Brisbane’s east, on Wednesday morning during their regular school run. “I’m so glad I got out when I did,” Clarke wrote to the woman earlier this month.

“It’s giving legitimacy to what has occurred. Tax evasion. In contrast, tax avoidance is the legal use of tax laws to reduce one's tax burden. 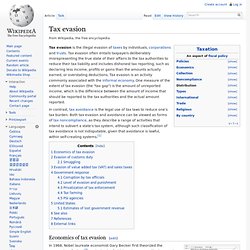 Both tax evasion and avoidance can be viewed as forms of tax noncompliance, as they describe a range of activities that intend to subvert a state's tax system, although such classification of tax avoidance is not indisputable, given that avoidance is lawful, within self-creating systems.[1] Economics of tax evasion[edit] The ratio of German assets in tax havens in relation to the total German GDP.[2] Havens in countries with tax information sharing allowing for compliance enforcement have been in decline. Federal Correctional Institution, Cumberland. The Federal Correctional Institution, Cumberland (FCI Cumberland) is a medium-security United States federal prison for male inmates in Maryland. 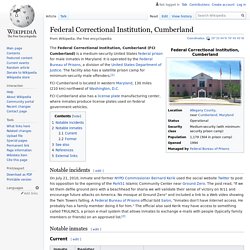 It is operated by the Federal Bureau of Prisons, a division of the United States Department of Justice. The facility also has a satellite prison camp for minimum-security male offenders.[1] Stop-and-frisk in New York City. The stop-question-and-frisk program, or stop-and-frisk, in New York City, is a New York City Police Department practice of temporarily detaining, questioning, and at times searching civilians and suspects on the street for weapons and other contraband. 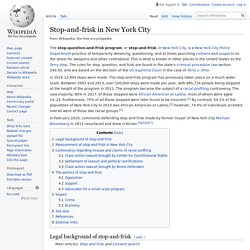 This is what is known in other places in the United States as the Terry stop. The rules for stop, question, and frisk are found in the state's criminal procedure law section 140.50, and are based on the decision of the US Supreme Court in the case of Terry v. Ohio. In 2016 12,404 stops were made. The stop-and-frisk program has previously taken place on a much wider scale. Death of Sandra Bland. 2015 death in police custody, Waller County, Texas, US Sandra Bland was a 28-year-old black American woman who was found hanged in a jail cell in Waller County, Texas, on July 13, 2015, three days after being arrested during a pretextual traffic stop.[1][2] Her death was ruled a suicide. 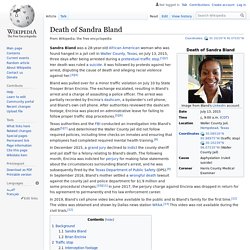 It was followed by protests against her arrest, disputing the cause of death, and alleging racial violence against her.[3][4] Bland was pulled over for a minor traffic violation on July 10 by State Trooper Brian Encinia. The exchange escalated, resulting in Bland's arrest and charge for assaulting a police officer. The arrest was partially recorded by Encinia's dashcam, a bystander's cell phone, and Bland's own cell phone. Texas authorities and the FBI conducted an investigation into Bland's death[5][7] and determined the Waller County jail did not follow required policies, including time checks on inmates and ensuring that employees had completed required mental health training.[8]

Death of Maria Fuertes. Maria Fuertes was a 92-year-old immigrant from the Dominican Republic living in New York City when she was raped and murdered. A Guyanese illegal immigrant has been charged with her murder. Political impact[edit] The case is part of what the Associated Press describes as "an escalating conflict between the Trump administration and the nation’s largest city over its so-called sanctuary policies. Olof Palme. Sven Olof Joachim Palme (; Swedish: [ˇuːlɔf ˇpalːmɛ] ( listen); 30 January 1927 – 28 February 1986) was a Swedish politician and statesman. A longtime protégé of Prime Minister Tage Erlander, Palme led the Swedish Social Democratic Party from 1969 until his assassination in 1986, and was twice Prime Minister of Sweden, heading a Privy Council Government from 1969 to 1976 and a cabinet government from 1982 until his death.

Electoral defeats in 1976 and 1979 marked the end of Social Democratic hegemony in Swedish politics, which had seen 40 years of unbroken rule by the party. While leader of the opposition, he parted[clarification needed] domestic and international interests and served as special mediator of the United Nations in the Iran–Iraq War, and was President of the Nordic Council in 1979. Abner Louima. Abner Louima (born November 24, 1966[1] in Thomassin, Haiti) is a Haitian man who was assaulted, brutalized, and sexually abused in 1997 by officers of the New York City Police Department (NYPD) after he was arrested outside a Brooklyn nightclub.

His injuries were so severe as to require three major surgeries. At first the police attempted to cover up the attack. Officers responsible for the attack were charged and convicted in federal court, and one is still in federal prison serving a 30-year sentence. Adela Holzer, Whose Fall From Grace Was Theatrical, Is Dead. Adela Sánchez (her middle name may have been María; she used it in more than one alias) was born in Madrid on Dec. 14 — possibly in 1928, although her death certificate said 1923. As New York magazine reported in 1989, her father, Felipe, was an engineer, and not a rich industrialist as she had told her new American friends. Her mother, Beatriz, was not a member of the Guinness brewing family as Ms. Holzer had sometimes claimed. Ms. West Vancouver man who killed, dismembered business partner convicted of manslaughter. WARNING: This story contains disturbing details that may be disturbing to some readers A West Vancouver man has been convicted of manslaughter and interference with a body in the 2015 killing of his business partner.

Li Zhao was originally charged with second-degree murder in the death of 42-year-old Gang Yuan. The court heard that Zhao fatally shot Yuan, but the judge ruled that the two men had argued and that there was reasonable doubt whether his intent had been to kill. Defence argued that Zhao had grabbed the rifle used in the shooting in self defence, after Yuan had picked up a hammer during the altercation. Choice page. Facing Her Daughter’s Killer, at Last. Central Park jogger case. False confession. Christopher Ochoa - Innocence Project. NY Daily News. Martin Tankleff. Martin H. Jay Salpeter's Struggle to Solve Marty Tankleff's Fifteen-Year-Old Murder Case - Nymag. The evening death came for me: My journey with PTSD. This is the shirt; the one that wrapped itself around my alabaster skin the evening death came for me.

The Savage Injustice of Trump’s Military Pardons. Rikers Guards Stood By for 7 Minutes as Inmate Tried to Hang Himself. Henry Lee Lucas. The Confession Killer Turns Lies into Fascinating True Story. Cyber Monday Scams to Watch Out For.